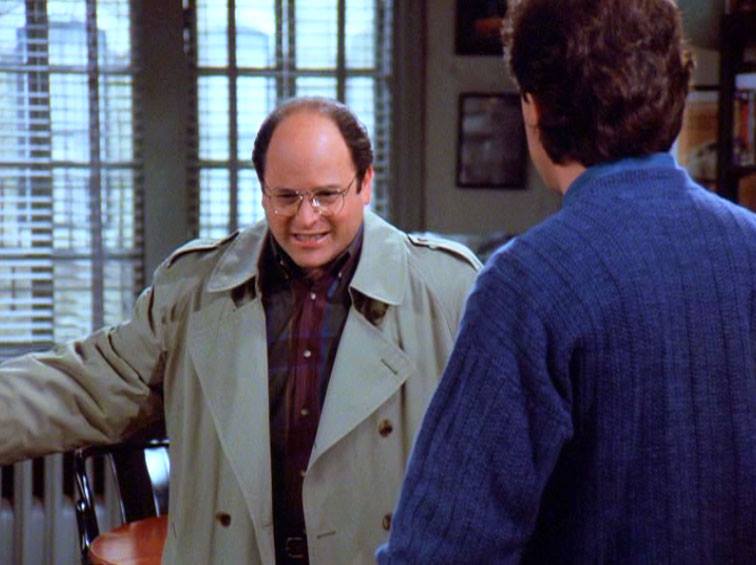 George becomes Steinbrenner's pet, when he shares an eggplant calzone with him. Kramer is raving about wearing clothes "straight out of the dryer." Jerry thinks that Elaine's boyfriend is dating her without really ever asking her out. He offers to bring Jerry some Cuban cigars from Canada. Jerry takes advantage of his girlfriend's ability to get anything she wants. Kramer searches for quarters for the dryer; when he can't find anymore, he starts using an oven. George gets into tip trouble with the counter guy at the calzone shop and he works out an arrangement with Newman. That is unless of course it's raining (Newman doesn't deliver mail in the rain); Kramer helps out.

Newman: Let me be perfectly blunt. I don't care for you, Costanza. You hang out on the west side of the building with Seinfeld all day laughing it up, wasting your lives.

Elaine: These are terrible.
Jerry: It's like trying to smoke a chicken bone.

Kramer: What happened to Newman?
George: He called in sick!
Kramer: Oh yeah right, it's raining.

George: (about George Steinbrenner) He fires people like it's a bodily function.

Steinbrenner: Costanza's in the building, and he's not in this office!

George: Beautiful women... Ya know, they get away with murder. You never see one of them lift anything over three pounds. They do whatever they want, whenever they want to, and nobody can stop them.
Jerry: She's like a beautiful Godzilla.
George: And I'm thousands of fleeing Japanese!

George: You don't work in the rain? You're a mailman! "Neither rain nor sleet nor snow"... IT'S THE FIRST ONE!!!
Newman: I was never that big on creeds.

George: (about Steinbrenner's love of the calzone) I'm like a drug dealer. I got the guy hooked. I'm having lunch at his desk every day this week... just him and me. He doesn't make a move without me.

Steinbrenner: George let me tell you something. When I find something I like I stick with it. From 1973 to 1982 I ate the exact same lunch everyday, turkey chili in a bowl made out of bread. Bread bowl George! You'd eat the chili then you'd eat the bowl. Nothing more satisfying than looking down after lunch and seeing just a table.

Jerry: You've got your shirt in my oven?
Kramer: Well, I didn't have enough quarters for the dryer, but this is better anyway. And it's more convenient.
Jerry: Oh, for both of us.
Kramer: Yeah, and I have a lot more control. I got a shirt going for ten minutes at 325.
Jerry: What's wrong with your oven?
Kramer: I'm baking a pie.

Kramer: I am never putting on another piece of clothing unless it's straight out of the dryer.

When Jerry first spots Kramer using his oven to heat clothes, Kramer is holding a newspaper open with both hands. In the next shot the paper is only in one hand and folded up, and later disappears completely.

When George comes into Jerry's apartment complaining that he's in a fix, Jerry's jacket is on. Then it is suddenly completely off and he's preparing to hang it up.

When George greets Steinbrenner with the replacement calzone, he alternately holds the paper bag in his hand or on top of the box.