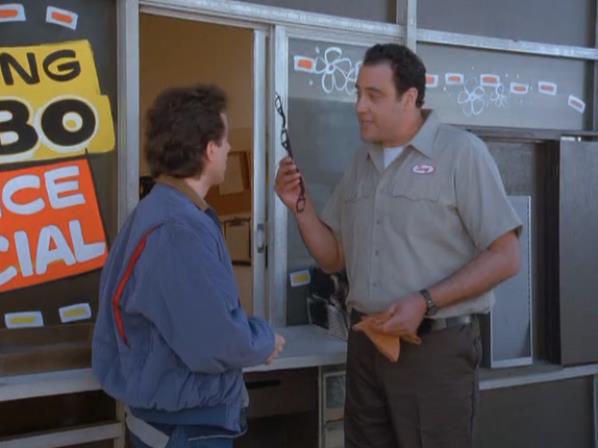 See this gasket? I have no confidence in that gasket!

George doesn't hear the details on an important project that Wilhelm wants him to champion. Peterman wants Elaine to bid on a set of golf clubs at the Kennedy auction, her ceiling is $10,000; however, she gets into a bidding war with Sue Ellen, the Oh Henry! candy heiress. Consequently, she spends a bit more than she was authorized. Newman finds the missing ingredient to make it cost effective in Kramer's scheme to collect used pop bottles and cans and take them to Michigan where the refund is doubled. Jerry takes his car to a mechanic, who's fanatical about car care. Elaine meets Jerry to get the golf clubs out of his car, but the mechanic, distraught over Jerry's negligence, steals it. Kramer and Newman collect their bottles and cans and hit the road in a mail truck.

Jerry: Hey. You put your groceries under the hood of my car?
Kramer: Aw, that's right, we forgot about those.
Newman: That's where my missing soda is.
Jerry: And your crab legs, and a thing of cheese. The Triple-A guy said I was this close to sucking a muffin down the carburetor.

Newman: We carry a couple of bags of mail and the rest is ours!
Kramer: Newman, you magnificent bastard, you did it!!
Newman: Let the collecting begin!!

When the women sets down the soda can, it is merely labelled generically with "Diet Soda", however the distinctive red and blue Pepsi symbol is clearly present.