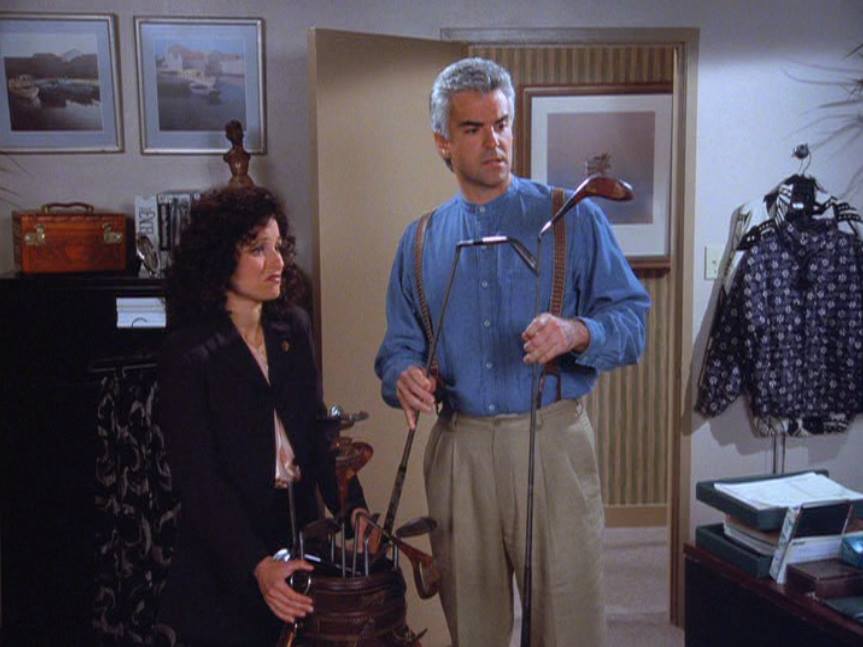 Elaine. I never knew Kennedy had such a temper

Wilhelm is delighted with the job George did on the project; however, he has no idea what he did or how he did it. The detective on the case thinks he's found Jerry's car, damaged beyond recognition. It's not, and later Jerry's mechanic calls him from the car. Kramer spots Jerry's car in Ohio. Steinbrenner calls George into his office about the project report and has him committed. Kramer ditches the cans, bottles, mailbags and Newman in pursuit of Jerry's car. Newman finds a farmer's house, complete with the proverbial daughter. The mechanic throws the clubs and bag at Kramer's truck, allowing him to get away. Deena is happy to see that George is getting the help he needs. Peterman is stunned when he finally gets the clubs, "Elaine, I never knew Kennedy had such a temper".

George: Aw, hoh, oh Deena, thank God. (he hugs Deena) Thank God you're here. Listen, you gotta help me. You gotta tell these people that I'm okay. You know that I don't belong in here.
Deena : George, this is the best thing for you.
(she walks away)
George : Yea. What? No, no!

J. Peterman: Elaine, you found the clubs. That's wonderful news! Where are they?
Elaine: Yep, let me get 'em for you Mr. Peterman.
J. Peterman: Aw, I'll be inaugurating them this weekend with none other than Ethel Kennedy, a woman whose triumph in the face of tragedy is succeeded only by her proclivity to procreate.
Elaine: (shows him the damaged golf clubs as he handles them) The, uh...the letter of authenticity is in the side pocket there.
J. Peterman: Elaine, I never knew Kennedy had such a temper.
Elaine: Oh...oh, yeah. The only thing worse was his slice. (hesitantly laughs)
J. Peterman: See you on Monday.
Elaine: Have a good game!

This is the first episode to show one of the main characters using a cell phone in the series.

At the end of the episode, when the farmer's daughter's cries out, "Goodbye, Norman! Goodbye", the actress, Karen Lynn Scott, actually missed her line and forgot the name of Wayne Knight's character. Since this made the scene funnier, it was left in the episode.

When Jerry says, "I didn't count on my mechanic pulling a Mary Beth Whitehead", he is referring to the the famous 1986 "Baby M" kidnapping case. Mary Beth Whitehead was a surrogate mother who fled the state with the infant she had given birth to.

After being thrown out of the mail truck, on foot, Newman approached a farmhouse. Of course, the farmer tells Newman that he can have anything he wants but must leave his daughter alone. This is the classic opening to every "farmer's daughter" joke ever told.

Wayne Knight credits this episode with prompting him to become healthier. After filming several takes of the last scene, in which Newman and Kramer dash through a cornfield, Knight began experiencing heart palpitations from running so animatedly. After visiting his doctor, he was told that he needed to shape up.

After discovering the farmhouse, Newman tells the farmer he was ambushed by "mail hating survivalists". This is a reference to "The Postman" by David Brin.

When Kramer and Newman are following Jerry's car, they pass by a certain patch of woods next to a graveyard type plot. It shows them driving on this same stretch of road several times throughout the chase.

When the postal truck is shown breaking down, the wide shot shows Kramer with both hands gripping the wheel. However, in close up shots, Kramer is on the phone with Jerry and has only his left hand on the wheel with the phone in his right.

When the mechanic throws the golf bag at the mail truck, it smashes the windshield to the far right as you face the truck. Later, the broken part is on the left and in one long shot, it isn't smashed at all.