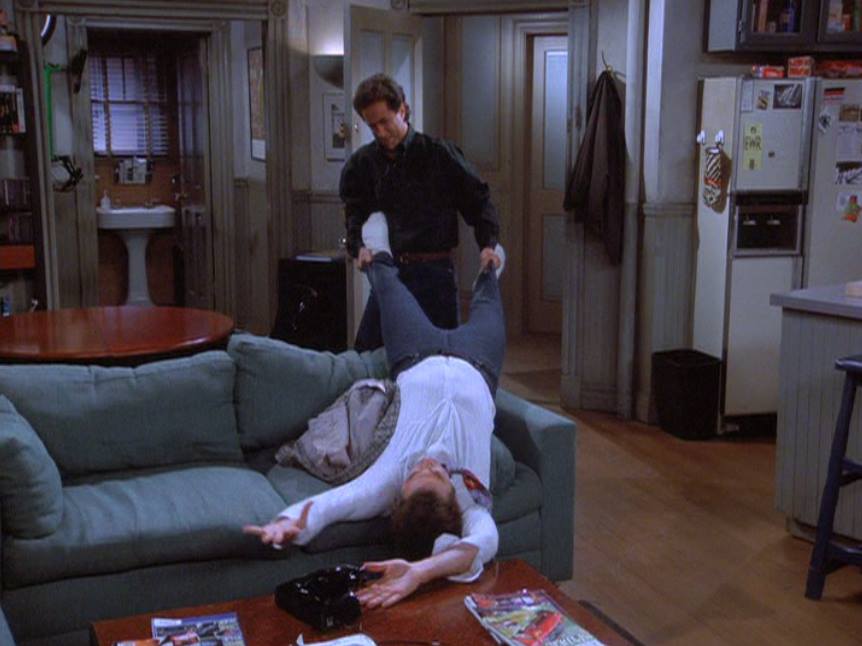 Man, these are tight!

After George makes an off-hand remark to a married couple with a rocky relationship, Jerry and Elaine wait in anticipation of their inevitable separation. Elaine sports a new hairstyle, starts driving again and almost makes Jerry car sick. Kramer starts wearing jeans again. The jeans are much too tight, so tight in fact, that he can't get them off when he really needs to. Elaine and Jerry make plans to move in on the separated couple, which they do. George feels guilty about breaking up the marriage and wishes to undo the damage. Jerry and Elaine physically oppose this action. David returns the off-hand remark to George in the presence of Susan. She tells George she has to think about some things- he thinks it is his ticket out.

George: A physician married to a salesman. I gotta tell you, Beth, you could have done a lot better than him.

Kramer: I've got the body of a taut, preteen Swedish boy.

Elaine: God, it is so great to drive again. I miss it so much. How about a left turn signal, you moron!
Jerry: (thinking) I'm so nauseous. She's the worst driver.
Elaine: You know what, on my first road test, I hit a dog. I think it was a golden retriever. No, no, no, it was a yellow lab.

Jerry: Remember Beth and David from yesterday? They got separated.
George: Really? Well, you don't think it had anything to do with what I said, do you?
Jerry: What did you say?
George: You know, that thing about her being too good for him. I mean, I was just being folksy. They could tell I was being folksy?

David: You know, as far as I'm concerned, this whole thing is George's fault.
Elaine: Well, David, the thing about George is that he's an idiot.

Beth: It's funny, George sometimes you don't know how you're feeling about something until a person like you comes along and articulates it so perfectly.
George: Articulate? Me? I've never articulated anything. I'm completely incoherent.

Elaine: You get your ass over to Beth's tout de suite. Turn on some of that so-called charm you tell me about.
Jerry: Yeah, I can try and do that.
Elaine: You don't try, you do it. I got the loser in this relationship. I'm breathing new life into him. Give me three more days, he won't remember her name. You got the winner, the easy part.

George: The shoelaces that you bought me they worked out well.
Susan: Well, you know, if you need some more I can get them for you.
George: It should be a while, though.

Elaine: (to Jerry) Confide in her. Open up to her. You know, women like that.
(later)
Jerry: Anyway, Beth You know, I was thinking on my way over how when I was 9, I wanted these handball sneakers. They were all black. But they only came in adult sizes. So, you know, I never got the sneakers.
Beth: Oh, really?

Susan: George why don't you go ahead. I think I'd like to be alone for a while.
George: Oh, sure. Sure, you want to be alone? Sure, I understand that. You want a little time to think? Think. Ponder things. You know, ruminate. You go ahead. A lot of stuff on your mind. You think things out. Think. Mull, just mull. Do a lot of mulling.
(later)
Susan: I've been doing a lot of thinking about the wedding and all and I've decided to go with the chicken.

When everyone is commenting on Kramer's jeans being too tight, Jerry says, "You're walking like Frankenstein". This is a common mistake as "Frankenstein" was the scientist and "Frankenstein's Monster" was the one who is known to walk stiffly.

You can hear Carey Elwes' British accent when he says the date of his anniversary to Elaine.