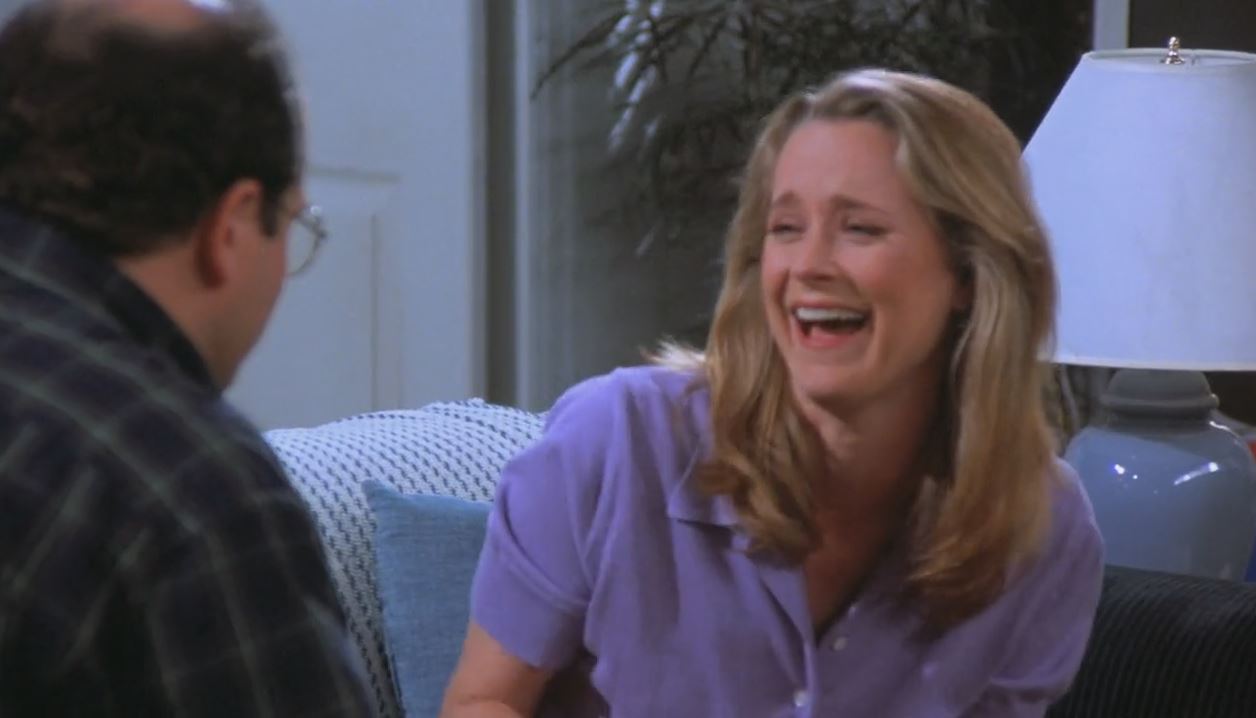 I put a lot of thought into this and I think I would like you to sign a prenuptial agreement.

As George and Susan pick out their wedding invitations, George is desperate to find a way out of getting married. Kramer is obsessed with a bank's promise to pay $100 to any customer not greeted with 'hello'. Meanwhile, Jerry thinks he's fallen in love with a woman with the exact same personality as him.

Elaine: Now I'm gonna be stuck at the singles' table with all the losers!?
Jerry: You can go with Kramer.
Kramer: No, no, no. Weddings are a great place to meet chicks. I have to be unfettered.

Jerry: Why don't you just break it off with her? Tell her it's over.
George: I can't.
Jerry: Why not?
George: Cause I can't face that scene. You know what kind of scene that would be? I'd rather be unhappy for the rest of my life than go through something like that.

Bank Manager: This man says he came in here the other day and you didn't say "hello"?
Bank Clerk: That's not true; I said "hey," you know, like a friendly greeting hey.
Kramer: But hey's not hello.
Bank Manager: This is a tough one. I'm gonna have to get some other people in on this.

Kramer: What is this, oak?
Bank Manager: I think it's pine.
Kramer: Pine is good.
Bank manager: Yeah, pine's aaalright.

George: (plotting a way out of his engagement) If only I could get her on a plane somewhere.
Jerry: And do what: hope for a crash?
George: It happens.
Jerry: Do you know what the odds of a plane crash are? It's a million to one.
George: It's something! It's hope!

Jerry: Now I know what I've been looking for all these years. Myself. I've been waiting for me to come along. And now I've swept myself off my feet!

The first episode of the season included a scene of George on a pier, contemplating marriage. This closing episode of the season repeats this scene with Jerry. In both cases, they were shot on the Santa Monica Pier in California. In fact, this episode has several parallels, and is almost like a mirror version of this season's premiere episode, "The Engagement."

This is the final episode where Larry David acted as executive producer. Although, he remained as the voice George Steinbrenner in upcoming episodes.

In an uncredited appearance, writer/producer Carol Leifer appears as one of the bank employees.

There were scenes shot with the real George Steinbrenner for this episode, but they were cut from the final edit. Apparently, Steinbrenner missed opening day of the Yankees' baseball season to make this appearance.

Up until the series finale, this was the last episode to feature Jerry's stand-up routines. This is because Jerry Seinfeld took over from Larry David as executive producer and head writer for seasons 8 and 9, and was too busy to come up with new stand-up material while simultaneously running the show.

Heidi Swedberg, who played Susan, stated that fans who recognized her on the street after the episode aired expressed frustration at her character's fate.

In light of the anthrax scares in the US in late-2001, the planned syndicated rerun of the episode "The Invitations" (originally aired on 16 May 1996) on 22 Oct 2001 was cancelled.

Jerry has a daydream where Kramer has an idea for a periscope in a car. This invention surfaces again in the Larry David series "Curb your Enthusiasm".

When Jerry imagines himself and Kramer as the only ones not married he has his glasses in his hand. As the shot goes behind Jerry, the glasses are on his face.