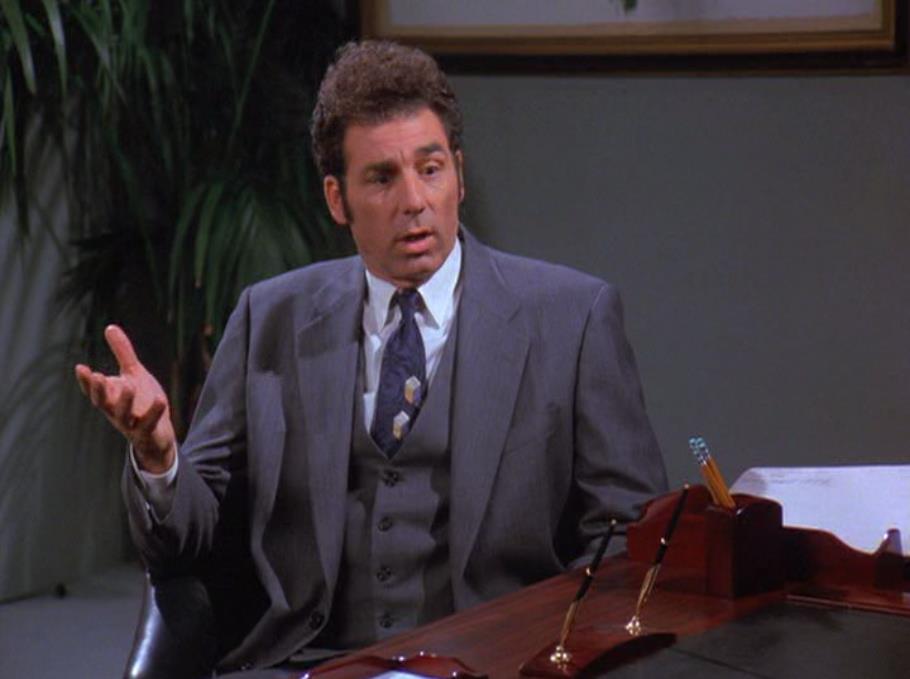 I don't even really work here!

Kramer uses a bathroom in an office building and just begins working there. He is "TCB." Elaine sets Jerry up with a friend who is very beautiful, but she has "man hands." George uses a picture of her and passes her off as his dead finance Susan; that gets him into the "Forbidden City" where high priced models hang out. Elaine meets Kevin and some of his friends; they are the exact opposite of Jerry, George and Kramer. With Kramer working, George inside the walls and Elaine hanging out with Kevin, Jerry begins to feel alone.

Kramer: You know what they say, you don't sell the steak, you sell the sizzle!

Kramer: But I don't even really work here.
Boss: That's what makes this so difficult.

Gillian: (smiles at him) Don't you just love lobster?
(Close-up of her Man hands tearing open a lobster.)

(Jerry walks in and sees Kramer cooking breakfast.)
Jerry: Kramer?
Kramer: Oh, good morning. This is breakfast... but I need to go, and I am going to work.
Jerry: How much time was I asleep?

Elaine: Would you prefer it if she had no hands at all.
Jerry: Would she have hooks.
Elaine: Do hooks make it more attractive, Jerry.
Jerry: Kinda cool looking.

Jerry: She had man-hands.
Elaine: Man-hands?
Jerry: The hands of a man. It's like a creature out of Greek mythology. I mean, she was like part woman, part horrible beast.

The Bizarro George's name is Gene, which incidentally is Larry David's middle name. Of course, Larry David was the character George.

In "Bizarro" Jerry's (Kevin's) apartment, there is a figure of Bizarro Superman on a stand, at the exact opposite spot of Jerry's, like all of his other furniture. Also, Kevin has a unicycle hanging on the opposite side of his bathroom door.

The Bizarro Superman statuette in Kevin's apartment was specially made for the episode. It is now owned by episode writer David Mandel and signed by the entire Seinfeld team.

The hands of actor James Rekart are the "Manhands" in this episode. James Rekart was personally cast by Jerry Seinfeld. Seinfeld remembered Rekart from acting classes at the James Best Theatre Center.

When Elaine comes into Kevin's apartment, you can see the shadow of the boom mic sweep across the top of the door.

In the scene where Kevin shows the ballet tickets to Elaine, notice that he first looks at his fall zone behind the couch to make sure he's lined up.

Several times in the episode, like when she is going to wash her hands, Gillian's smaller and more feminine hands are visible.