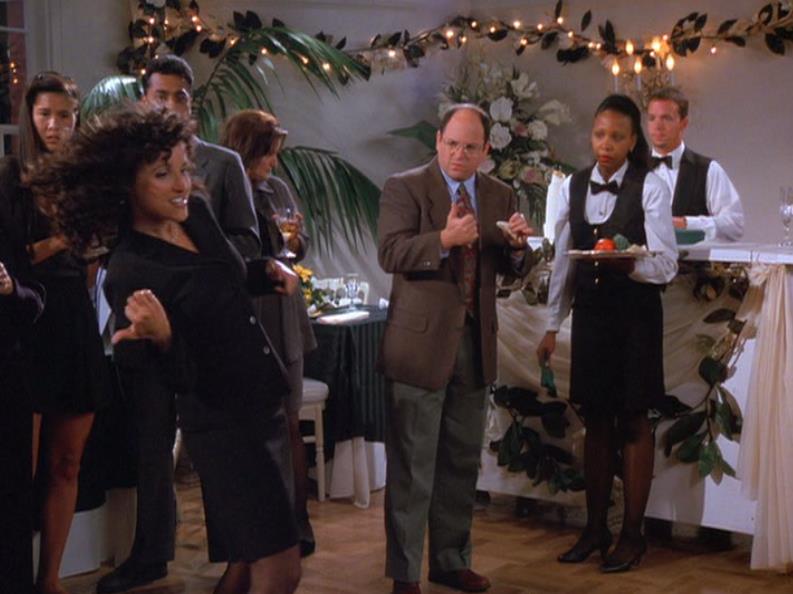 It's more like a full-body dry heave set to music.

Elaine reluctantly lets George attend a party she is throwing at work. "Sweet fancy Moses" exclaims George when he sees Elaine dance at a party she's holding for her employees. She wonders why they've lost respect for her. Jerry gets 2 tickets to a premiere of a film. Kramer asks him to get an extra ticket for his friend Brody. Elaine thinks the loss of respect might be due to George's influence, so she makes him off limits to Anna, one of the women George talked to at the party. That "bad boy" image makes him all the more desirable. Jerry and Kramer attend the film with Brody, who begins to make a bootleg tape. Brody gets sick and has Kramer take him home, leaving Jerry to finish making the tape. Jerry worries about the implications when Brody likes him camera work and asks him to do another film. However, he complains about the quality of Kramer's work. Elaine finds out the truth about her dancing after she tapes herself. Elaine apologizes to Anna and George, which suddenly makes him undesirable. Brody won't meet Jerry's demands for equipment; George takes on the challenge, but gets arrested. Frank comes to bail him out and Elaine lets him know the truth about his son. Elaine's dance becomes a big hit on the streets of New York.

Elaine: (after her fight with Frank Costanza) He wrote the check and I cashed it.

Jerry: Out of nowhere there's this lone dancer who appears to be injured.
Kramer: Yeah, it's a disturbing image.
Jerry: Yeah, so you cry, and then when you see the dancing, you cry again.

Jerry: People with guns don't understand. That's why they get guns, too many misunderstandings.

Kramer: Jerry, George got arrested.
Jerry: What?
Kramer: Yeah. He went at the Beackman, he tried to land, but they cheesed him.
Jerry: Oh now I see.

Kramer: Jerry, look, you got to shoot this movie for me. Brody is a reasonable man, but he's insane!

Anna: It's alright, George, you'll just pay a fine and that will be it.
George: (crying) But why did the police man have to yell at me like that?

Elaine: You know, revulsion has now become a valid form of attraction.
Jerry: Well, then you're driving me wild.

Kramer: Death Blow. Where someone tries to blow you up, not because of who you are, but for different reasons altogether.

Brody: (holding bat) May I borrow this?
Kramer: Yes. You need a glove?
Brody: Naah.

(about George's dad)
George: During that period when my folks were separated, he went a little crazy.
Jerry: Not a very long trip.

Kramer: (about bootlegging movies) It's a legitimate business.
Jerry: It's not legitimate!
Kramer: It's a business.

George: Ow! Dad...
Frank: Who put you up to this, was it her?
Elaine: All right. Wait a minute. I think you've got it backwards.
Frank: My George isn't clever enough to hatch a scheme like this.
Elaine: You got that right.
Frank: What the hell does that mean?
Elaine: It means whatever the hell you want it to mean.
Frank: You saying you want a piece of me?
Elaine: I could drop you like a bag of dirt.
Frank: You wanna piece of me? You got it! (They begin to fight)

When George is ironing his pants talking to Elaine and Anna on speaker phone, you can see George has hamsters. There is a little white hamster climbing through a colorful hamster tube behind him.

According to Julia Louis-Dreyfus, the key to the comedy in her dancing was to look as ridiculous as possible while keeping her face full of confidence and thorough enjoyment.

Dugan, the J. Peterman catalog staffer, must have writer's block. This episode marks the second time in four weeks that he brainstorms a writing sample that begins, "I pressed through the rushes..." (The first time, in "The Foundation," was to promote a washcloth.)

When Elaine arrives at the park in a taxi to take Anna away from George, the NYC taxicab has California license plates.

George mentions that he has his father's '68 Pontiac GTO. When we see the car, it is actually a '67.