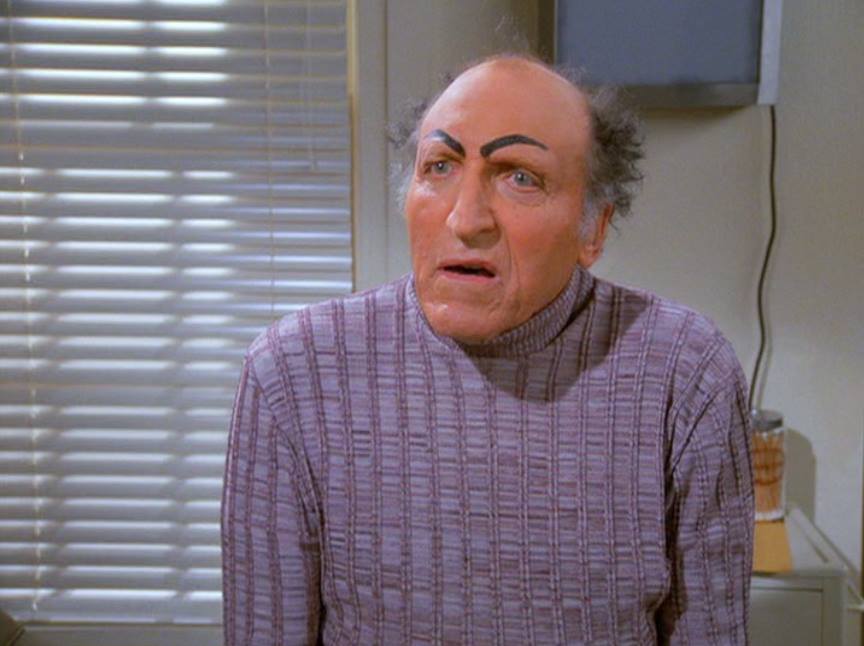 Whoa, whoa, no need to get angry. Calm down.

Elaine has a rash and looks for a doctor who will treat her; despite her doctor -- patient relationship reputation. Kramer offers Jerry a method to get a refund on his stereo that is two years out of warranty. George discovers the woman at the photo store is looking at his pictures. Jerry refuses delivery of a package with no return address. George thinks that the photo store clerk has stuck a revealing picture of herself in with his pictures. Kramer convinces George to return the compliment and offers to take the photos. Uncle Leo signs for Jerry's package. Elaine tries to lift her medical records. Jerry lets Uncle Leo open the package and there is the sound of an explosion. Leo's stove has exploded but eventually Jerry gets the package and opens it up. It contains his stereo in pieces. Kramer sent the package to him insured; now all they must do is collect the insurance money from the post office. Elaine poses as Uncle Leo's nurse to try a diagnosis for her condition. When that doesn't work she tries to get Kramer to lift her records. Newman grills Jerry on suspicion of mail fraud. George drops off his film at the photo store and gets a surprising result.

Elaine: I was looking at my chart and it said that I was difficult. Why would they write that?
Jerry: They've gotten to know you.
George: Why don't you find a doctor that doesn't know you're difficult.
Elaine: Oh come on, I'm not difficult. I'm easy.

Kramer: So, uh, one chart coming up. It's Bennett, right?
Elaine: It's Benes, you jackass! My last name is Benes!
(Kramer pauses, dumbfounded)
Elaine: Yeah!

Kramer: Yes, I'm Dr. van Nostrand from the clinic. I need Elaine Benes's chart; she's a patient of mine and she's not going to make it. It's, uh, very bad, very messy.
Nurse: I see. And what clinic is that again?
Kramer: Uh, that's correct.
Nurse: Excuse me?
Kramer: From the Hoffermanndale Clinic, in Belgium.
Nurse: Really?
Kramer: The Netherlands?

Mailman: Package for you. Sign here.
Jerry: Who's it from?
Mailman: No return address.
Jerry: What if I don't want it?
Mailman: Are you refusing delivery?
Jerry: Maybe I am.
Mailman: Why would you do that?
Jerry: I've never done it before.
Mailman: Why start now?
Jerry: Why not?

Newman: Alright, let me ask you this. Don't you find it interesting that your friend had the foresight to purchase postal insurance for your stereo? Huh? I mean, parcels are rarely damaged during shipping!
Jerry: Define 'rarely'.
Newman: Frequently.

Kramer: It's the timeless art of seduction.

Jerry: I wish I had the last 20 seconds of my life back.

Jerry: You don't know what a write off is, do you?
Kramer: No, but they do. And they're the ones writing it off.

Jerry: (to another of Kramer's schemes) Oh yeah, I like this idea.

Jerry: The explosion burned off his mustache and eyebrows, he's all smooth now, like a seal. (about Uncle Leo)

George: Who's going to bomb you? An airline? For all the stupid little peanut jokes?
Jerry: Oh, I suppose you think you're bombable.
George: There's a couple of people who wouldn't mind having me out of the way.
Jerry: There's more than a couple.

Jerry: I'm not gonna treat my uncle like a bomb-defusing robot.

The scene in which Newman interrogates Jerry is a reference to the famous Sharon Stone leg-crossing scene in the movie "Basic Instinct". In fact, Wayne Knight (Newman) actually appeared in that movie as one of the interrogators.

Even after Kramer packages Jerry's stereo and mails it, there is a stereo system still visible on Jerry's shelf. However, it must be noted that the faulty component that Jerry was initially jiggling with the screwdriver was on a shelf lower than the stereo components that remained on the shelf, and it is missing in subsequent scenes! (Therefore, this is not really a goof.)