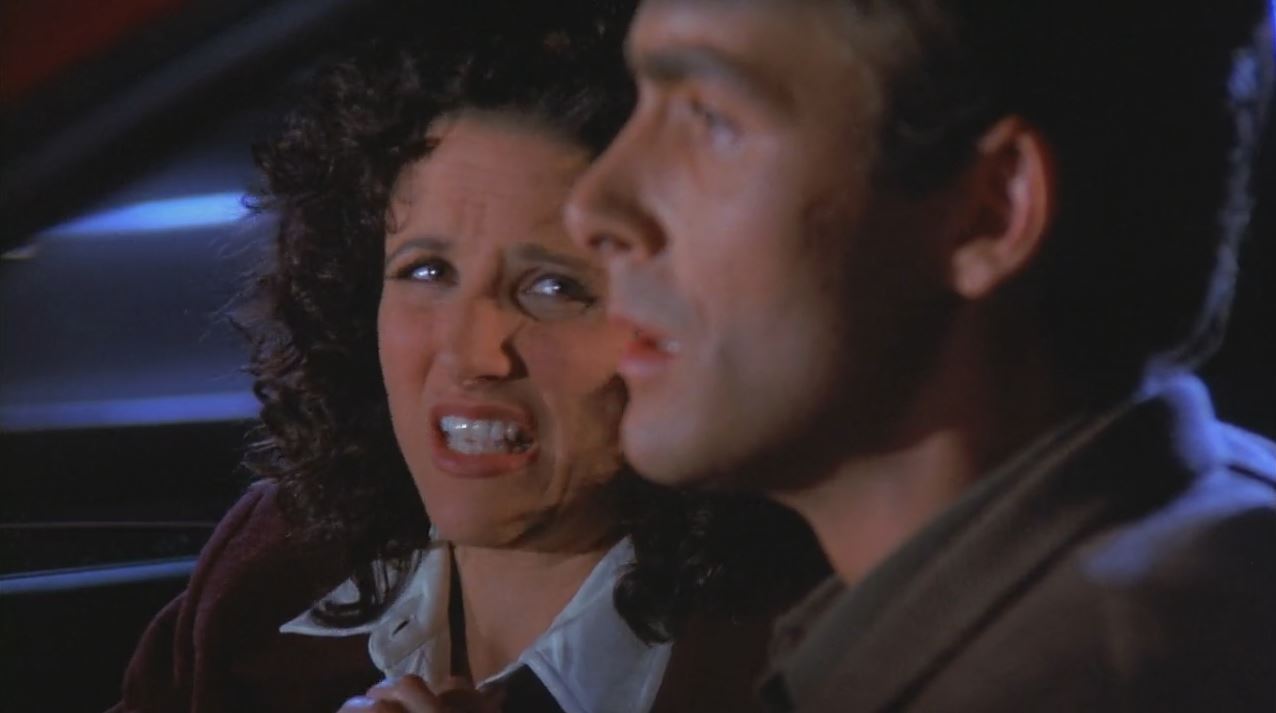 Elaine, could you just not talk for one minute?

Jerry receives countless 12-cent royalty checks for a clip of him used in a Japanese TV show. Kramer befriends a group of Japanese tourists, which leads George to try to revive the pilot of "Jerry" to air in Japan. Meanwhile, Elaine deals with a boyfriend who's obsessed with a furniture designer and the song "Desperado".

George: Who buys an umbrella anyway? You can get them for free in the coffee shop in the metal cans.
Jerry: Those belong to people.

George: He's giving you furniture? Who is this guy?
Jerry: Who are any of her losers?
George: You're on that list.

Jerry: So you're angry that this bizarre carpet cabal made no attempt to abduct you?
George: They could've at least tried.
Jerry: You know, maybe they thought you look too smart to be brainwashed.
George: Please.
Jerry: Too dumb?

Jerry: You have them sleeping in drawers?
Kramer: Jerry, have you ever seen the business hotels in Tokyo? They sleep in tiny stacked cubicles all the time. They feel right at home.
Jerry: This has international incident written all over it.

(Jerry picks up the phone)
Jerry: Yeah?
George: (panicked and rushed) Jerry! The Japanese guys had sake in the hot-tub! You gotta get 'em outta the drawers and get 'em down here, or I don't have a focus group to sell the pilot to Japanese TV!
Jerry: (kidding) Uncle Leo?
George: JERRY!
(George begins hammering the phone against the kiosk and Jerry lifts the phone away from his ear at the noise)
Jerry: All right, all right. I'll wake 'em up.

Jerry: (to Kramer) That's a lovely little bureau and breakfast you're running.

Kramer: Everybody laughs at Jerry here in America.

After their meeting with the Japanese TV execs, George talks about the female executive in the same way he talked about Susan after the NBC meeting. Also, notice how the female Japanese exececutive seems to be wearing an outfit similar identical to the one Susan wore .

The Urban Sombrero makes a cameo in this episode.

After being apparently brainwashed by Sunshine Cleaners, Mr. Wilhelm tells George that his name is Tania. Tania, is the name adopted by Patricia Hearst after she was allegedly brainwashed by the Symbionese Liberation Army.

When Jerry leaves to cash the checks he says "Konichiwa" to Kramer, which actually means "how are you" in Japanese.