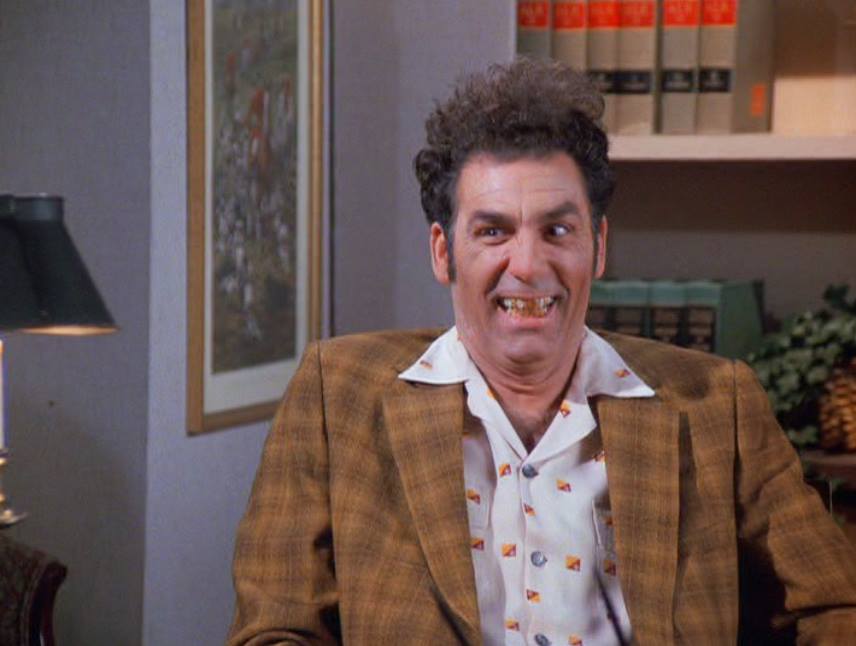 Your face is my case

George's girlfriend has mononucleosis and he can't have sex with her for six weeks. Elaine's met a doctor who's almost gotten his license to practice. Jerry agrees to appear at career day at his former junior high school, first he is bumped and then there is a fire drill. Kramer lights up a cigar in Monk's and is asked to leave. He meets others on the street who face his dilemma so he opens up his apartment as a smoking lounge. Jerry's agent gets him an assembly at the school. George's lack of sex makes his mind sharper. Elaine learns how much her doctor boyfriend doesn't know about medicine. She uses George's technique to help him study to get his license, but in the process she becomes an idiot. Jerry struggles to figure out how to fill two hours in front of a junior high crowd. George uses his new found intellect to give batting advice, speaks Portuguese and prepares a presentation for Jerry's assembly. Kramer sees his lawyer about a case against the tobacco company, smoking has destroyed his looks. He gets a settlement without Jackie's input. George calculates the odds of scoring with a Portuguese waitress. Elaine's boyfriend gets his license and leaves her sexless.

George: (who will have to abstain from sex) I can do six weeks standing on my head. I'm a sexual camel.

Jerry: (to George) So you're enjoying the not enjoying.

Jackie Chiles: This is the most public yet of my many humiliations.

Jackie Chiles: Jackie's cashing in on your wretched disfigurement!

Elaine: What is with all these books?
George: I stopped having sex.

Tobacco Executive: I think Mr. Kramer projects a rugged masculinity.
Jackie Chiles: Rugged? The man's a goblin. And he's only been exposed to smoke for four days; by the time this case gets to trial he'll be nothing more than a shrunken head.

Jerry: (at his old junior high) I'm getting bumped? You're bumping me from career day?

Ben: (to Elaine) I always knew that after I became a doctor, I would dump whoever I was with and find someone better. That's the dream of becoming a doctor.

George: (Derek Jeter and Bernie Williams) Guys, hitting is not about muscle. It's simple physics. Calculate the velocity, v, in relation to the trajectory, t, in which g, gravity, of course remains a constant. It's not complicated.

George: Who are you gonna eat to survive?
Jerry: Kramer.
George: So fast? What about me?
Jerry: No.
George: Kramer's so stringy. I'm plump, juicy.
Jerry: Kramer's got more muscle, higher protein content. It's better for you.
George: Well, I would eat you.
Jerry: That's very nice, I guess.
George: I still don't see why you wouldn't eat me. I'm your best friend.
Jerry: Look, if other people are having some, I'll try you.
George: Thank you.

Jerry: (to Elaine) To a woman, sex is like the garbage man. You just take for granted the fact that any time you put some trash out on the street, a guy in a jumpsuit's gonna come along and pick it up. But now, it's like a garbage strike. The bags are piling up in your head. The sidewalk is blocked. Nothing's getting through. You're stupid.

Kramer: My face is all craggly, it's crinkly!
Jerry: It's from all that smoke. You've experienced a lifetime of smoking in seventy-two hours. What did you expect?
Kramer: Emphysema, birth defects, cancer. But not this. Jerry, you know, my face is my livelihood. Everything I have I owe to this face. It's my allure, my twinkle.
Jerry: And your teeth, your teeth are all brown.
Kramer: Look away, I'm hideous.

"Two coffees and a big salad", is what George says in Portuguese.

The working title for this episode was "The Portuguese Waitress."

During the business with the lettuce, it is 'stalk up' when seen over Gerry's shoulder but not when seen from the front.

When Kramer says, "look away, I'm hideous", you can tell that Jerry is having trouble controlling his laughter. This is confirmed in the outtakes from this episode.