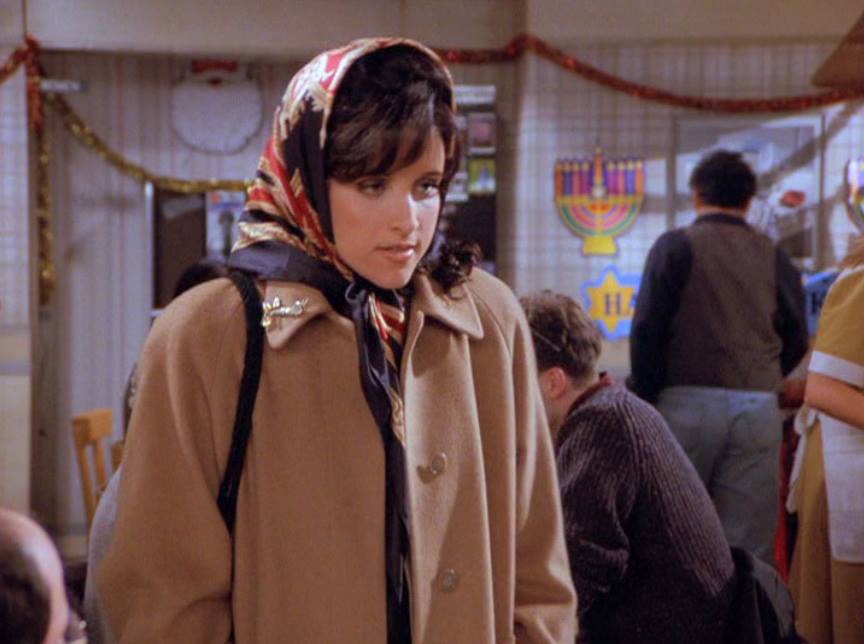 A bird ran into my giant freak-head.

George is excited about the new apartment he is going to move into. Elaine is on a blind date, now called a "set-up." Jerry takes Kramer to his self-storage where they discover that Newman has been hiding bags of mail. George finds out he can't get his apartment because the tenant association is going to give it to an Andrea Doria survivor. Elaine is told her date won't be making it because he's been stabbed. She is aroused by the situation. Kramer's cold is getting bad and he's not going to the doctor, they botched his vasectomy, he's more potent now than ever. Jerry tries to get Newman to get rid of the mail; however, he's not interested because he didn't get the transfer to Hawaii. Kramer finds a dog with a cold that he volunteers to take to the vet, so he can get medicine for their colds. Elaine meets her blind date who gets coffee thrown in his face from another ex-girlfriend. She discovers his problem is that he is a "bad breaker upper." George confronts his rival for the apartment and decides to wage war. Elaine's blind date breaks up with her and tells she has "a big head." From a suggestion by Jerry, George asks for a hearing with the association and tells them the story of his life. Jerry forms "an alliance" with Newman that will hopefully get him out of his life forever. Jerry tries to get Kramer to take his medication. He discovers that Kramer is taking dog medication and beginning to exhibit the signs of being a dog. The big head comment begins to hold true for Elaine and she makes a comment about jamming "a fork in his forehead." Jerry tries to take Kramer to a real doctor. After Kramer bites Newman's ankle, Jerry offers to deliver the rest of his mail. He is too efficient for the post office. Elaine meets up with her blind date and makes good on her promise. Kramer saves the day. George and the survivor don't get the apartment.

Newman: Hawaii... The most sought-after postal route of them all. The air is so dewy-sweet you don't even have to lick the stamps.

Jerry: Did you find out who stabbed him?
Elaine: Yeah, it turns out it was his ex-girlfriend.
Jerry: Well, you're not going near this hooligan anymore.
Elaine: Well, I don't know. I mean, think about it, Jerry. There must be something exciting about this guy if he can arouse that kind of passion. I mean, to be stab-worthy. You know, it's kind of a compliment.
Jerry: Yeah, too bad he didn't get shot. He could have been the one.

Jerry: (about Elaine's blind date) They like to call it a set-up now. I guess the blind people don't like being associated with all those losers.

George: That's my apartment. I earned it with 34 years of misery.
Alan: Tough luck, chinless!

George: The Stockholm may not have sunk ya, but I will!

George: Ahoy, Mr. Eldridge. I understand you were on the Andrea Doria.
Mr. Eldridge: Yes, it was a terrifying ordeal.
George: I tell ya, I hear people really stuff themselves on those cruise ships. The buffet, that's the real ordeal, huh, Clarence?
Mr. Eldridge: We had to abandon ship.
George: Well, all vacations have to end eventually.
Mr. Eldridge: The boat sank.
George: According to this, it took ten hours. It eased into the water like an old man into a nice warm bath, no offense.

Jerry: Elaine, Newman is my sworn enemy, and he lives down the hall from my home. My home, Elaine! Where I sleep; where I come to play with my toys.

Elaine: All I have to do is call him up, and sit with him, and show him that it doesn't bother me. You know, laugh it off. Or jam a fork into his forehead.
Jerry: Either way.

Elaine: I found out he's a bad breaker-upper.
Jerry: Bad how?
Elaine: Well, you know when you break up, how you say things you don't mean? Well, he says the mean things you don't mean, but he means them.
Jerry: I follow. So, what are you going to do?
Elaine: Dump him. I can't be with someone who doesn't break up nicely. I mean, to me, that's one of the most important parts of a relationship.

Kramer: 51 people died.
George: 51 people? That's it?! I thought it was like a thousand!
Kramer: 1060 survivors.
George: Thats no tragedy! How many do you lose on a regular cruise? 30? 40?!
George: In closing, these stories have not been embellished because they need no embellishment. They are simply, horrifyingly the story of my life as a short, stocky, slow-witted bald man. (George gets up to leave and adds, almost as an afterthought) Oh, Oh, also.. my fiance died from licking toxic envelopes that I picked out.

Alan: (to Elaine) You've got a big head. It's too big for your body.

George: (about Mr. Eldridge) Even if he did suffer, that was, like, forty years ago! What has he been doing lately? I've been suffering for the past thirty years up to and including yesterday!

Jerry: (about George's new apartment) So, it's a two-bedroom one-bath make-your-friends-hate-ya?

Jerry: I've been trying to jam stuff in the box, like you told me, but sometimes it says, "Photographs - Do not bend."
Newman: "Do not bend?" (laughs) Just 'crease, crumple, cram'; you'll do fine.

Kramer: No doctors for me. A bunch of lackeys and yes-men all towing the company line. Plus, they botched my vasectomy.
Jerry: They botched it?
Kramer: I'm even more potent now!

Newman: You can't deliver mail!
Jerry: Well, why not?
Newman: I guess you're right. It's just walking around putting it into boxes.

George reveals his age to be 34 even though he gave his age as 33 in "The Heart Attack", six seasons ago.

When Jerry says, "My home, Elaine! Where I sleep; where I come to play with my toys," he is alluding to a line by Don Corleone in the "The Godfather, Part II".

When George is in his new apartment the door says it is apartment number 608. When the head of the tenant association comes down to talk to him, she says that Mr. Eldridge from Apt. 8C is getting the apartment. What kind of weird apartment has two different numbering systems?

Kramer tells George that 51 people died and 1066 were rescued from the Andrea Doria. The actual numbers were 46 dead with 1660 survivors.