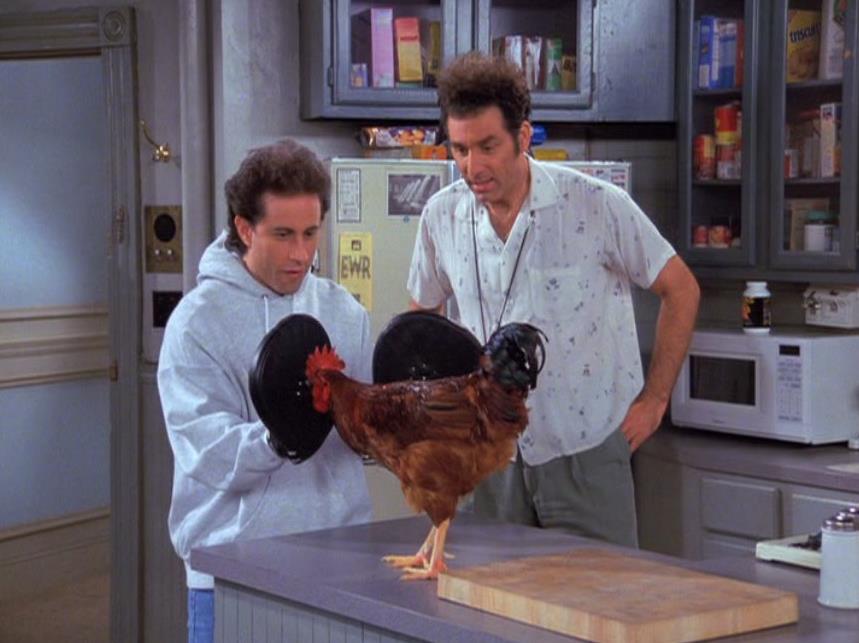 Jerry is disgraced when his clown patterned check bounces and is displayed outside the local bodega. Elaine starts dating a man who shaves his head but when he's depressed when he finds out he's going bald. George hooks up with a convict through the foundation and things go surprisingly well. Kramer buys a chicken in the hope of fresh eggs but when it turns out to be a Rooster, he trains it to cock-fight.

(At the cockfight)
Jerry: Celia didn't want to come?
George: Nah, she's not really into sports.

Jerry: He just shaves his head for no reason?
George: That's like using a wheelchair for the fun of it!

George: So Celia is up for parole today.
Kramer: Ya, 'Little Jerry' won his first cockfight.
George: What?
Kramer: Who?
(both stare at Jerry)
Jerry: I'm too tired.

Jerry: George, this is a little too much for me. Escaped convicts, fugitive sex... I got a cockfight to focus on.

Jerry: (about getting married) Your life's gonna totally change.
Elaine: Jerry, it's one in the morning; I'm at a cockfight; what am I clinging to?

Jerry: Little Jerry ran from here to Newman's in under 30 seconds.
George: Is that good?
Jerry: (shrugs) I don't know.

Kramer: The check comes down as long as little jerry wins his cock fight.
Jerry: Great... what?!
Kramer: Yea Marcelino has cock fights in the back of his store.
Jerry: Kramer, cock fighting is illegal.
Kramer: (with food in his mouth) Yea, but only in the United States!

Jerry: Kramer, cockfighting is illegal.
Kramer: Only in the United States.
Jerry: It's inhumane.
Kramer: Jerry, it's not what you think.
Jerry: It's two roosters pecking at each other!
Kramer: What? I thought they had gloves and helmets. You know, like American Gladiators.

George: You're in jail? That's so cool!

Kramer: But You should've seen 'Little Jerry' Jerry. Flapping his wings and strutting his stuff. His pecking, and weaving, and bobbin, and talking trash! He didn't even have to touch him. The other rooster ran out of the ring. The whole fight lasted 2 seconds.
Jerry: How long do they usually last?
Kramer: 5 seconds.

Jerry: That is a rooster.
Kramer: Well, that would explain Little Jerry's poor egg production.

Elaine: (to a bald Kurt) Are you saying that I could be dating this hair? ... With you under it.

At the beginning of the episode, the camera is pulled back just enough to reveal the actual name of the restaurant where the gang always meets as "Tom's Restaurant

On Jerry's bounced check that is on display in Marcelino's store, the word "forty" has been misspelled as "fourty."