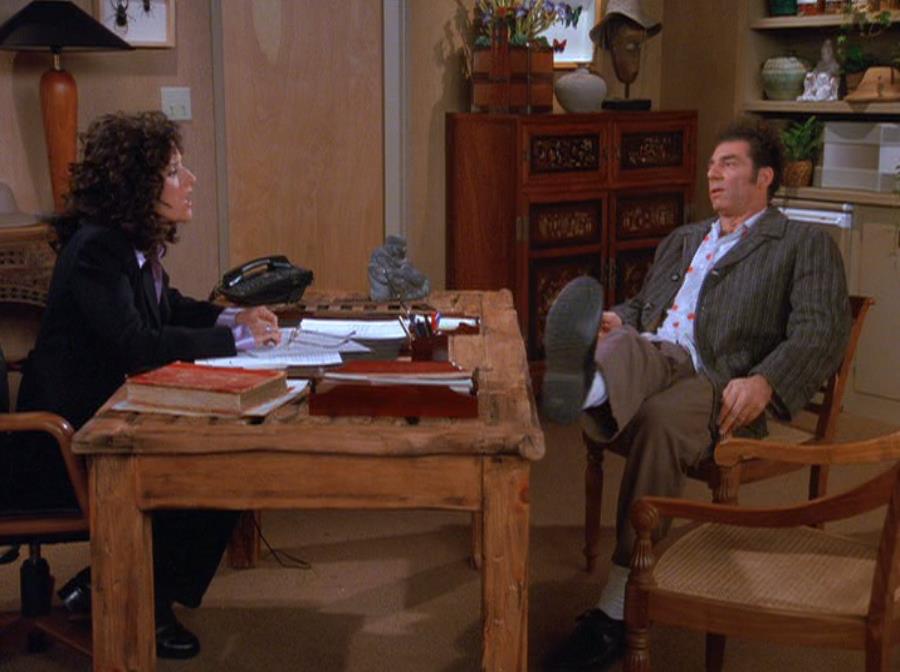 She's got the jimmy legs.

Jerry's parents sell the Cadillac to Jack Klompus for $6000 in order to give Jerry some money to help him out. They along with Kramer suggest that Jerry might try a career move. Elaine talks about her Peterman stock options and buys George's coffee. He thinks she is sticking it to him. Jerry and George talk about the money their parents might have. This piques George's interest. Kramer seeks advice from Elaine about his girlfriend's post-sex bed habit "she's got the jimmy legs." Jerry flies to Florida to buy the Cadillac back. George seeks information on his family's health history. Kramer works out a deal with his girlfriend. Jerry meets with Klompus and agrees to pay $14,000 for it. George anticipating a big inheritance begins to spend money. Unfortunately for him, so do his parents. Klompus has a problem with the car and Jerry returns to Florida. Jerry's parents are still worried about him and wonder what to do. Morty decides to see Elaine about a job; she reluctantly agrees to give him a job, just as Peterman returns. Kramer, fearing a prowler (Jerry's dad), decides he can no longer sleep alone; unfortunately his girlfriend has decided she can. So he moves in with the Costanzas, who tell George that they are moving to Florida. Elaine returns to her regular position at Peterman, with no options. George and Elaine try to discuss their respective problems. Still in Florida, strapped for cash and credit, Jerry sleeps in the Cadillac. Kramer and Emily spend the night as an old married couple in the Costanzas' house. The Seinfelds make a change in their housing as the Costanzas try to settle into their new place.

Helen: Jerry, your father and I have something to tell you...
Jerry: (excited) Am I finally getting a baby brother!?

Frank: I saw a bum sleeping in a Cadillac the other day.
Estelle: Why would someone break into a car to take a nap?
Frank: They don't nap. They make it their home. They URINATE IN THERE!
Peterman: These stories are what sell my clothes.
Morty: Cheap fabric and dim lighting. That's how you move merchandise.

Jack Klompus: What took you so long?
Jerry: I live in New York.

Jerry:(to Klompus) You are such an idiot.

Klompus: Do whatever you want! It's your car!
Jerry: My car? You drove it into the swamp!
Klompus: It drove itself into the swamp! Besides, I think I lost my pen, too.
Jerry: You know, that almost makes this worthwhile.

Peterman:(referring to Morty Seinfeld) Elaine, did you hire this man?
Elaine: No, no. Well, I mean, you know, he's more like an intern, you know, at best.

J. Peterman: Oh, Elaine, this dry air is curing me like a Black Forest ham!

According to Sarah Silverman, Michael Richards screamed at her because she kept blowing her line "It was probably the wind."

Sandy Baron (Jack Klompus) fell into a coma days before production. The episode was being rewritten for another character but Baron came out of his coma in time.

The name "Del Boca Vista" is a nonsensical invented Spanish phrase. The closest possible translation would be "of the seen mouth."

When Elaine is paying for George's coffee you can see her reaching for her wallet but in the next second she's already holding the coffee.

When Morty is doing his exercises on Kramer's doorknob, in the first shot, Kramer's clock reads 5:30. When it cuts back to a frightened Kramer, it reads 5:26.