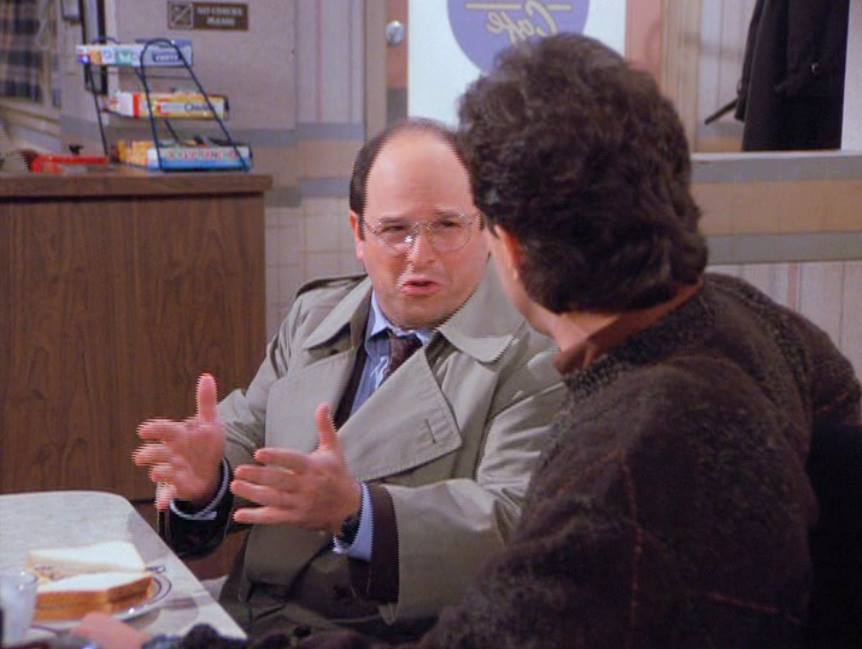 To have a line as perfect as 'jerk store' and to never use it... I couldn't live with myself.

George has trouble thinking of a comeback to a comment made by Reilly; he does think of one, but it's a little too late. Jerry buys a new tennis racket from a supposed professional. Elaine and Kramer discuss video picks. Elaine prefers picks by Vincent. He prefers picks by Gene or his own. He watches his latest pick and it makes him concerned about spending the rest of his life in a coma. Elaine is intrigued when she receives a phone call from the mysterious Vincent. Jerry discovers that the tennis pro is a hack player. George comes up with what he thinks is the perfect line and will listen to no one else's opinion. Kramer makes a living will, with Elaine as the executor. The tennis pro, fearing he will be exposed, tries to bribe Jerry, including a rendezvous with his wife. Elaine opts for another movie and makes Vincent angry. George finds out that Reilly doesn't work for the Yankees anymore, so he tracks him down to Ohio, where he plans to deliver his line. Kramer finishes the movie he rented and discovers it is possible to recover from a coma, he decides to change his will. Milos' wife has no respect for him; he asks Jerry to let him beat him in tennis. Elaine receives a phone call from Vincent and she convinces him to let her meet him. She is surprised by his appearance. Kramer goes into a coma after being hit with tennis balls. Meanwhile, in Akron, George delivers his line about "the jerk store."

Jerry: Trust me, Kramer. Given the legal opportunity, I will kill you!

Elaine: (on turning off a life support system) Yank it like you're starting a mower.

Kramer: (to Elaine) You're a calculating, cold-hearted business woman. And when there's dirty work to be done, you don't mind stomping on a few throats.

George: So, guess where Mr. "Ocean phoned" turned up? He's working for Firestone, in Akron, Ohio.
Elaine: Ohio?
George: Yep. I'm leaving first thing tomorrow morning.
Jerry: You're flying to Akron, just to zing a guy?
George: Don't you understand? It's not about him. To have a line as perfect as "jerk store" and to never use it. I, I couldn't live with myself.
Elaine: See, there are no jerk stores. It, it's just a little confusing, is all.
George: It's smart. It's a smart line, and a smart crowd will appreciate it. And, I'm not gonna dumb it down for some bonehead mass audience!
(George realizes that everyone in the coffee shop is staring at him)
George: (waving apologetically) Not you.

Kramer: (on being in a coma) I don't want to be a vegetable, Elaine. I just want out.

Reilly: So, George, you're proposing a snow tire day at Yankees Stadium?
George: (through a mouthful) As long as they don't throw 'em on the field.(laughs)Help yourself to some shrimp, I brought enough for everybody.
McAdam: I have to say this, this proposal doesn't make a whole lot of sense.
George: Well, you never know. (picks up more shrimp) Let's see how many I can fit in my mouth.
(George begins picking up shrimp one by one and stuffing them into his mouth)
Reilly: You know, George...
(George looks up, expectantly)
Reilly: The ocean called, they're running outta shrimp.
(Everyone except George starts laughing)
George: Oh yeah, Reilly? (wipes his mouth and stands up) Well, the jerk store called, they're runnin' outta you.
Reilly: (unperturbed) What's the difference? You're their all-time best seller.
(Everyone except George starts laughing again)
George: Yeah? Well, I had sex with your wife.
(long silence)
McAdams: (standing up and leaning over to speak in George's ear) His wife's in a coma.

Yankee exec: (to George) We only wake you up for the important meetings.

Milos: You're not planning to hit these balls with that racket are you?

Kramer: Go around ya bunch a crazies!

Fred: All right, let's get to it.
George: Wha...wait a minute, wha-what about Reilly?
Fred: Reilly doesn't work here anymore.
George: (surprised) What? I-I didn't hear about that.
Fred: Oh, we only wake you up for the important meetings.
(Everyone at the table collapses into laughter)

Jerry: You actually said that to him?
George: Well, no... I thought it up on the way over here.

When Kramer watches the end of his movie, he is sitting in his couch eating spaghetti. Behind him is a sign, that says "Elevator, forsigtig!". This is Danish for "Careful, Elevator!".

It seems that "Vincent: may be a reference to Vincent Van Gogh and the VCR Play Button would be the equivalent to his ear.

In this episode, Kramer says he didn't know it was possible to wake up from a coma. However, in "The Suicide" (S03E15), Jerry's neighbor Martin goes into a coma and when he wakes up from it, Kramer is in the hospital room.

When Kramer tells Jerry he's set up a meeting with a lawyer, he refers to him at "Shelbig". Then, when he arrives late for his appointment, the secretary calls him "Shelbock". And finally, when Kramer goes to find him at his tennis lesson, he calls him "Shelback".