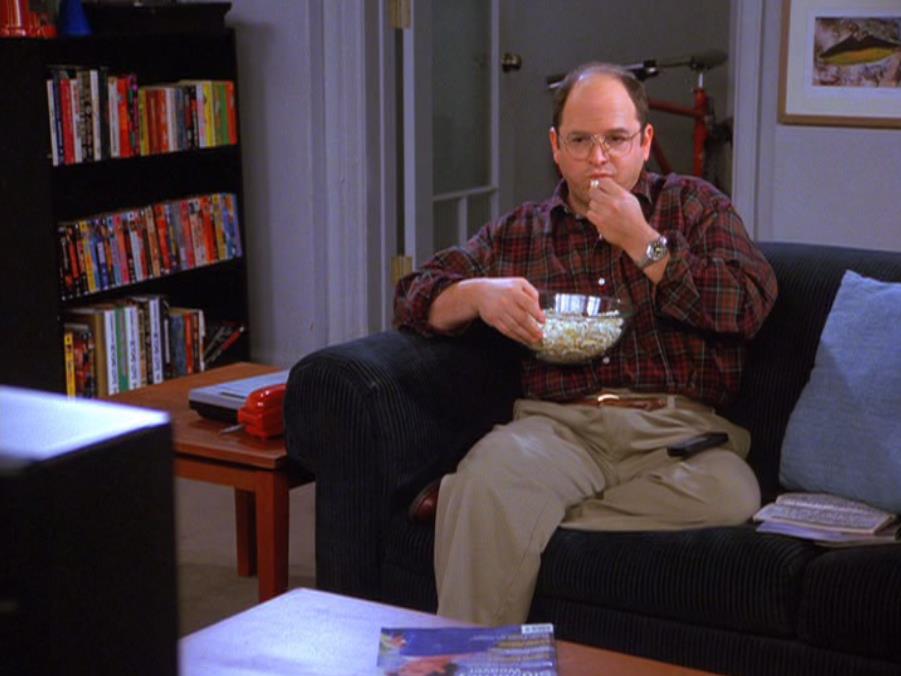 Kramer decides that daylight saving time isn't coming fast enough, so he sets his watch ahead an hour. Mike, the guy who once referred to Jerry as "a phony," has become a bookie. Peggy, a co-worker of Elaine's calls her "Susie." George is excited about Steinbrenner's ball. He hopes to show off his tall blonde girlfriend with a grand entrance. Instead, she says she wants to talk. He runs away. "If she can't find me, she can't break up with me." He really wants to make that big entrance at the ball. Kramer tells Jerry that he owes Mike $100 for a bet he made on that night's Knicks game. Only Jerry never made the bet; Kramer did it for him. In fact, Kramer attends the game and gets into a fight with a key player that causes Jerry to win his bet. Peggy starts talking to "Susie" about Elaine's memo. Peterman hearing about the complaints demands to see Elaine, Peggy and "Susie" in his office; first thing in the morning. Mike can't pay Jerry, so he offers to help him with his trunk problem, but instead gets his thumbs broken for the trouble. Kramer breaks up with George on behalf of Allison. Elaine makes it through the morning meeting. Mike gets trapped in Jerry's trunk. Elaine and Jerry, in his car, decide it would be best to eliminate "Susie." George reconciles with Kramer. Elaine delivers the eulogy at "Susie's" wake, much to the confusion of Peggy. Kramer, with George, makes a spectacular entrance at the ball. Mike escapes from Jerry's trunk and accuses him of murder. The same fate befalls Elaine that befell George; Peterman puts her in charge of a foundation in "Susie's" honor.

Peterman: Between you, me, and the lamppost... and the desk, Peggy says this Suse isn't much of a worker.
Elaine: It's Susie.
Peterman: Nevertheless Elaine, the House of Peterman is in disorder.

Elaine: Look, we don't have to name names or point fingers or...name names! Me and her have had our problems. She and I have had our problems. You and I and she and you.
Peterman: Don't you drag me into this. This is between you and her and her.
Elaine: Yes! And I'm convinced that if she were here with us today, she would agree with me too.
Peterman: Who?
Elaine: (weakly) Her.
Peterman: Where is she?!
Elaine: Ah, this is part of the problem.
Peggy: I thought I was part of this problem?
Elaine: You're a Huge part of the problem. But, I think that at its core, this is a Susie and Elaine problem that requires a Susie and Elaine solution. And who better to do that than...(pauses) Elaine and Susie, Susie and Elaine!
Peterman: Well, now that we have that cleared up, why don't the three of us have lunch?
Elaine: (pretends she heard someone in the hall) What! Oh, I'm...coming! I-I gotta go.(runs out)
Peterman: (to Peggy) She is the best. What was your name again?

George: Maybe I'll call you sometime.
Kramer: George, it's over.
George: What do you think, Jerry?
Jerry: I don't know. I didn't see you guys together.

Peterman: Elaine, I'm going to start a charitable foundation in Susie's honor and, as Susie's best friend, I want you to be involved.
Elaine: Mr. Peterman (whispers) I'm Susie. She's me.
Peterman: (also whispering) I feel the same way.
Elaine: (looks bewildered)
Peterman: That's why this foundation will meet around your schedule. Nights, weekends, every free moment you have. (pats her on the shoulder and leaves)
Elaine: SUUUUUUUUUUUUUZE!!!!

George: Wait till you see the dress that she's got. It's backless! Eh? I'm finally gonna make a great entrance!
Elaine: Backless? You're gonna back her in?
George: Elaine, when a woman makes a ball entrance, she twirls.
Elaine: She's not gonna twi...
George: She'll twirl!

Jerry: I thought you went to the game?
Kramer: Naw, I was kicked out for fighting with one of the players.
Jerry: Who?
Kramer: Reggie Miller.
Elaine: Cheryl Miller's brother?
(After Kramer leaves the room and is done explaining the scenario)
Jerry: Can you believe that?
Elaine: I didn't know Cheryl Miller's little brother played basketball.

Elaine: You won't believe this, but as I'm leaving she calls me Susie.
Jerry: I don't see you as a Susie. Sharon, maybe.
Elaine: What am I, a bulimic, chain-smoking stenographer from Staten Island?

Kramer: By the way, you owe Mike a hundred dollars.
Jerry: What for?
Kramer: Well, I put down a bet for ya on tonight's game. If the Knicks beat the Pacers by more than 35, it pays 10:1. That's some sweet action!
Jerry: But I don't want any sweet action!

Mike Moffit: Guess what? I just started my own business. I'm a bookie.
Jerry: No openings in arson?

(Kramer bursts in)
Kramer: The Knicks killed 'em 110 to 73!
Jerry: What, of course, without Reggie Miller, it's a blowout.
Kramer: No, Jerry, that's 37 points! The Knicks covered! You won! Now that's a cool gee, daddy-o. Now ya gotta let it ride.
Jerry: On what!?
Kramer: Come on Jerry, I don't want to lose this feeling!

George: My whole life, I've never made a great entrance!
Jerry: You've made some fine exits.

In the scene where Peterman pulls up in his car at the funeral home, notice the illogical parking.

Elaine screaming "Suse" and the camera from above is just like the end of "The Foundation" when George does this in the coffee shop and yells "Kahn".

George's phone message song is a parody of the theme song to "The Greatest American Hero." The song actually became a top 40 hit for singer Joey Scarbury in 1981.

We cut back and forth between a daytime funeral and a "simultaneous" nighttime bar scene.

When Elaine gets up from her chair to speak at Susie's funeral, she places her coat on the seat next to her. But the next time the camera cuts back to the seats, the coat has jumped to Elaine's.