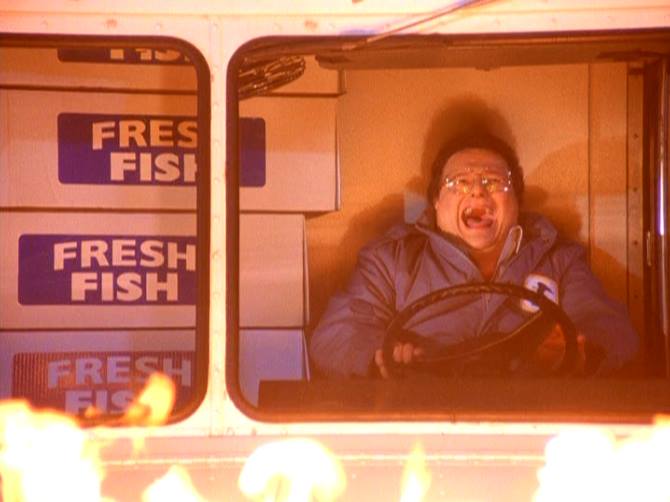 Elaine wants to have some Chinese food delivered, but lives just outside the delivery zone. In order to fool the delivery man, she pretends that the janitor closet in the building across the street is her apartment. The trouble is the landlady mistakes her for the janitor. Kramer joins the "adopt a highway" program, but his methods are a little unorthodox. Jerry's new girlfriend uses a toothbrush that had fallen into the toilet, which causes him more trouble than he could have imagined. George loses his keys, and by the time he finds them, they're buried at the bottom of recently filled pothole.

(Trying to dig up his Phil Rizzuto keychain with a jackhammer, George accidentally hits a water pipe, causing it to be violently launched into the air by a geyser of water)
Keychain: Holy Cow!

Elaine:(to the delivery boy) This isn't fair. This is address discrimination!

Elaine: I'm plum out.
(in reference to Kramer asking for a gallon of paint thinner)

George: I just have to do all the jack-hammering myself.
Jerry: Oh that's nice, kind of a hard-labor fantasy camp.

Elaine: Hi. Jerry, can I borrow your car?
Jerry: For what?
Elaine: I have to haul some dirty garbage to the dump.
Jerry: Dirt? That's alright, because there's nothing wrong with dirt.
Elaine: Well, actually it's pretty grimy.
Jerry: Grime, grease, filth, funk, ooze. Whatever it is, you take that stuff and put it right on my leather upholstery.
Elaine: Well, I don't know who you are, but thanks for the car.

Jerry: (After George squeezes the Phil Rizzuto keychain head to get it to say 'Holy Cow!') Do they have to squeeze the real Phil Rizzuto to get him to say that?
George: Just in the last few innings of a double header.

Jerry: You're pretending to live in a janitor's closet just to get this flounder?
Elaine: It's better than eating it alone in the restaurant, like some loser.

Kramer: This parenting isn't about delegating responsibility, it's about being there.
Jerry: At the side of the road, with a pile of garbage.
Kramer: Quality time.

Newman: Cause you're once, twice, three times a lady.

Elaine: (to Jerry) So now you're finding fault on a sub-atomic level.

Jerry: I'm never going to let a 'hygienic mishap' ruin what could be a long and meaningful relationship.

Jerry: (referring to George's keychain stuck in the pothole) Poor son of a bitch.

George: So the plan is to secretly sterilize her mouth?
Jerry: By the time I'm through with her mouth, she'll be able to eat off it.

Elaine: Jerry, you have tendencies. They're always annoying, but they were just tendencies. But now, if you can't kiss this girl, I'm afraid we're talking disorder.
Jerry: Disorder?
Elaine: And from disorder, you're a quirk or two away from full-on dementia.

Kramer: You could've introduced me.
Jerry: I wouldn't know where to start.

Kramer: As of today I am a proud parent of a one-mile stretch of the Arthur Berkhardt Expressway.

You can hear Newman's screams replacing the music during the Castle Rock logo at the end of the episode.

The scene where the gang all crowds into Elaine's janitor's closet is an homage to the 1935 Marx Brothers movie, "A Night at the Opera", in which fifteen people crowd into a passenger ship's tiny stateroom.

When Newman exclaims, "Oh, the humanity!" he is making a reference to WLS radio reporter Herb Morrison upon witnessing the Hindenburg disaster.

Between cuts in the janitor's closet scene a cardboard box labeled "tortellini soup" appears among the clutter in the foreground then is seen turned round so that the writing is no longer visible.

Some of the road signs that Kramer had at Jerry's apartment, such as "Yield" and "One Way" would never be used on a highway.

When Elaine calls from Jerry's apartment to order the food, she gives the fake apartment number, but never gives the building address.