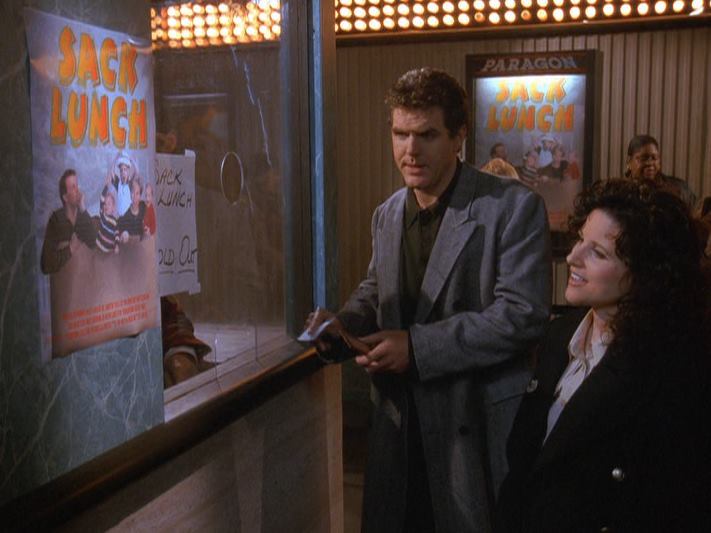 So do you think they got shrunk down or is it just a giant sack?

A woman mistakes George for her boyfriend Neil, a guy who looks just like him. This intrigues George; he wants to meet Neil. Jerry is going to Florida to help his parents move. Kramer asks him to pick up some Cubans from his cigar guy and also gives him a T-shirt. Elaine and her boyfriend see "The English Patient"; she absolutely hates it and that makes her unpopular and dumped. Jerry's dad gets the T-shirt, #1 Dad, that he is very proud to wear, despite its small size. At his parents' exercise room, Jerry meets Izzy, an 80-year-old man who can't stand to lose; he challenges Jerry to a weightlifting competition; "It's go time!" He throws his back out again and again. Kramer's Cubans arrive; they're real people and not the cigars that Jerry thought he would be getting. George is overly obsessed with Neil, to the point where he is missing out on Danielle. Jerry is back in New York, where Izzy has returned to see a back specialist. Though Kramer's Cubans are really Dominicans he tries to pass them off as "Cubans" anyway; it doesn't work. Elaine's dislike for the film alienates her from everyone. When she tells Peterman that she hasn't seen the film, he immediately takes steps to correct the situation. Jerry meets the rest of Izzy's family all of who are fiercely competitive. He finds work for Kramer's "Cubans." Elaine still hates the movie, but must go to the Tunisian desert to live in a cave to save her job. Kramer thinks his unemployed Dominicans, whom he educated about communism, are planning to revolt; later they do. George gets a last word on Neil when Danielle makes a decision between the two of them.

Guillermo: Ladies and gentleman, because we have been exploited by your Magic Pan Crepe restaurants, we are hijacking this plane to Cuba. Kindly stay in your seats, and shut that movie off.
Elaine: Aw, nuts!

Elaine: Oh, come on. Good? What was good about it? (scoffs) Those sex scenes! I mean, please! Gimme something I can use!

J. Peterman: Elaine, you don't like the movie?
Elaine: I HATE IT!!! (everyone shushes Elaine) OH, GO TO HELL!!!

Izzy: Hi, son.
Izzy Jr.: Hi daddy.
Jerry: This is your son?
Izzy: I got married in high school.

Jerry: Why are the crepes spraying?
Kramer: I think the Dominicans are rolling them too tight. That's why you got to get real Cubans.

Elaine: You know, sex in a tub, that doesn't work!

Morty: Son, this shirt is the best thing you've ever given me.
Jerry: You know I bought you a Cadillac, twice.

George: How old is the son?
Jerry: I think he's the same age as the father.

Izzy: Call an ambulance!
Jerry: We're already in a hospital!

Kramer: (nervous) Yeah. I'm a little worried. When there's no work, and the people get restless, who do you think they come after? (pointing to himself, shrill) El Presidente!

Jerry: You're not wearing a shirt, are you?
Kramer: Yes, I am.
Jerry: What color is it?
Kramer: (looks down) Damn!

Elaine: Oh, come on, Blaine. I mean, look at the poster for Sack Lunch.
Blaine: It's a family in a brown paper bag.

Jerry: I swear to you, I didn't know the TV was bolted to the table.

Morty: Okay. Tomorrow, Jerry and I will visit Izzy and apologise.
Now, goodnight. (heads to the bedroom with Helen following him)
Helen: You're not sleeping in that shirt. It's too tight.
Morty: This shirt will never leave my body.

George: Maybe it's some small thing I could change. Like a moustache. Or wearing a top hat, or a monocle, or a cane.
Jerry: Who's she dating, Mr. Peanut?

George: I've got to out-do this Neil guy.
Jerry: What if it's Neil Armstrong?
George: Then I'm going to Mars!

Izzy Sr.: Hey, I can't see the TV.
Jerry: (approaches the TV and moves) Here! (leaves w/ the Mandelbaums shocked)
Izzy: You think you're better than us, don't you?!

Dugan: (enthusiastically about "The English Patient") Oh yes. It was so romantic. It ravished me.

Izzy: How 'bout that, huh? "The World's Greatest Dad." My son made it for me.

Elaine: So do you think they got shrunk down, or is it just a giant sack?

(While talking about the Mandelbaums.)
George: What is with this family?
Jerry: I don't know. It's like if one of them dies, the other one wants to bench press the casket.

Mandlemaum: Now who is the number one dad?
Jerry: Well I don't know how official any of these rankings are.

Danielle: How could you not like that movie?
Elaine: How 'bout... it sucked?

Helen: How could you do that to Mr. Mandelbaum? You should be ashamed of yourself.
Jerry: He egged me on.
Helen: You should be more mature.
Jerry: He's eighty!
Elaine: Hey, what're you guys doing here?
Lisa: We just saw The English Patient again.
Gail: It's even better the second time.
Elaine: They make it longer?

Jerry: (to George) So she wanted you to come up but you left because you thought some guy might be calling you!?!

George: So, we meet at last. I admire your skills, Mr. Peanut.

Danielle: George, I can't move in with you.
George: What?
Danielle: I'm sorry, but I'm taking Neil to a clinic in England.
George: No. You can't leave me. Marry me! I'll burn myself! I'LL BURN MY PARENTS!!

Izzy Jr.: (to Jerry) Hey, who are you?
Izzy: This is Seinfeld's kid.
Izzy Jr.: Oh, you think you're tough, picking on an old man? Maybe you'd like to try taking on somebody your own age.
Jerry: (chuckling) You got any kids?

When George finally meets Neil, he is in the hospital with his face bandaged after being burned, just as the English Patient's was.

One of the investors in Kramer's cigar rolling business is Earl, Kramer's airport lounge gambling partner from the season 6 episode 'The Diplomat's Club'. Apparently, Earl has forgiven Kramer for "hustling" him in that episode.

This is the first Florida - based episode where Jack Klompus doesn't appear.

Instead of the Castle Rock logo closing music, we hear the three Mandelbaums saying "Mandelbaum! Mandelbaum!"

One of the reasons Elaine gives as to why she hated The English Patient is her contention that sex in a tub "never works". Actually, in the movie, the main characters do share a bathtub, but they do not have sex in it.