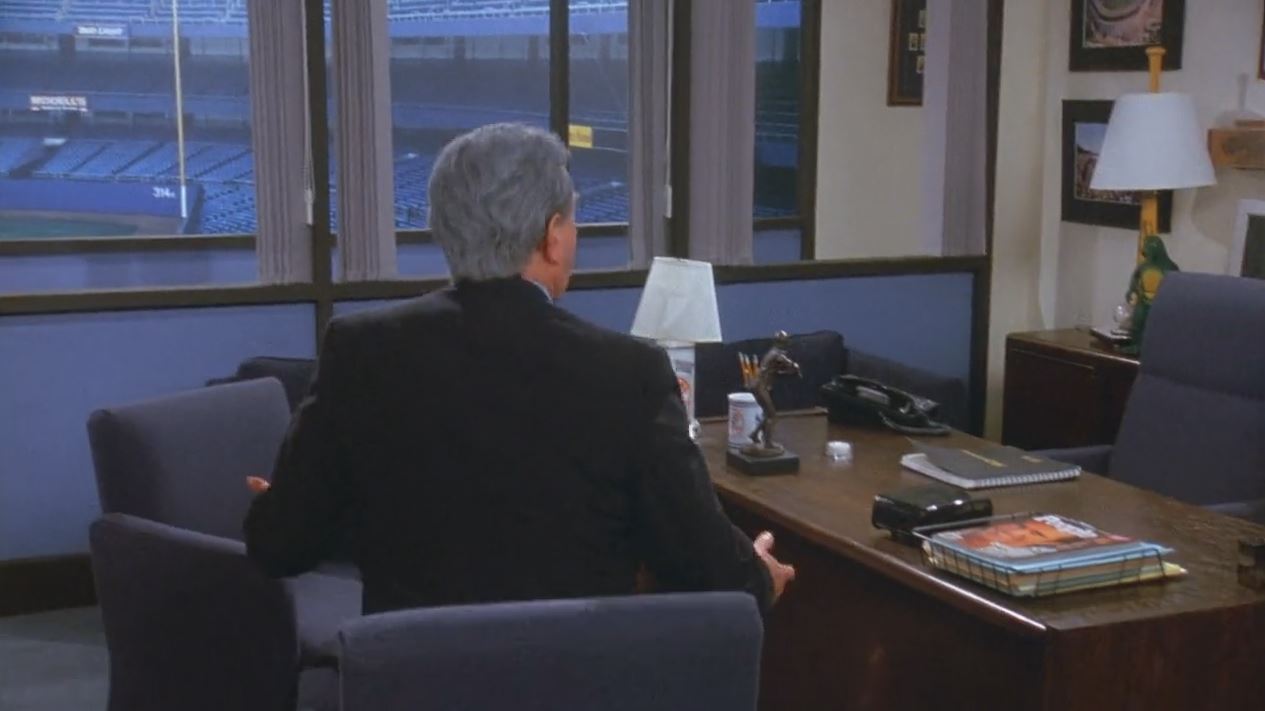 George is tired and needs to take a nap while at work; he finds the perfect place, under his desk. Kramer has taken up swimming, but he finds the pool too constricting for his needs; he begins swimming in the East River. Elaine's date is worried about his back and hers; he sends her a mattress and she gets the wrong idea. She gives the mattress to Kramer. Jerry is getting new kitchen cabinets, but the contractor is constantly asking him questions. George gets Jerry's contractor to make some modifications for his desk, including space for an alarm clock. Steinbrenner is in George's office looking for him; he decides to wait for George to return. George gets Jerry to phone in a bomb threat in an effort to get Steinbrenner out of his office. After finding George under the desk, Steinbrenner thinks he has ESP and would be perfect to meet the terrorist's demand of a fitted hat day. Meanwhile, Jerry's contractor, left on his own, has made a change in Jerry's kitchen that no one likes. Elaine gets her mattress back when she gets the right idea; however, Kramer has fouled it up with the stench of the East River. Elaine's boyfriend discovers the benefits of swimming in the East River. Steinbrenner hears a ticking sound in George's office, thinks it's a bomb and calls in the bomb squad. Jerry decides he needs his old kitchen back. Elaine throws her back out trying to get rid of the mattress. Kramer's river gets crowded and George finds a new place to nap.

George: Jerry! Jerry, I'm trapped under my desk. Steinbrenner's in the room. You gotta help me!
Jerry: Who is this?

Kramer: Well, I had been swimming for 3 hours and I was in a real groove so I decided to keep going, but at 10 they start the aquasize. 35 geriatrics throwing elbows. It's like a flabby arm spanking machine.

Jerry: How could you swim in that water!?
Kramer: I saw a couple of other guys out there.
Jerry: Swimming?
Kramer: Well, floating. They weren't moving much...but they were out there!

Jerry: What is that smell?
Kramer: That's East River.
Jerry: You're swimming in the East River? The most heavily trafficked, overly contaminated waterway on the eastern seaboard?
Kramer: Technically, Norfolk has more gross tonnage.

Jerry: The walking date is a good date. You don't have to look right at the person.
Elaine: Hey, it's the next best thing to being alone.
George: I love a good nap. Sometimes it's the only thing getting me out of bed in the morning.
Elaine: So Kramer completely funked up my mattress.
Jerry: Does it smell like the East River?
Elaine: How did you know?
Jerry: Because Kramer has been swimming laps between the
Queensborough bridge and the Brooklyn bridge.
Elaine: (a la Kramer) Oh, GREAT!
Son: Hey, there's a man swimming in the water.
Father: No, that's probably just a dead body, son. You see, when the mob kills someone they throw the body in the river.

Steinbrenner: Nothing but male curiosity and empty calories... hey Georgie?

Elaine: It'll be years before they find another place to hide more cheese on a pizza.

George: Jerry, look at my eyes.
Jerry: Hmmm... they're a little less beady today.
George: Because I'm refreshed! I finally found a way to sleep in my office. Under the desk! I lie on my back, I tuck in the chair. I'm invisible!
Jerry: Sounds like a real cool fort.

Hank: I buy all my furniture at an ergonomics store.
Elaine: Oh those places always the stupidest names!...like uh... "Back in Business" or..."Good Vitabrations"
Hank: Not this one...it's called the Lumbar Yard.

When George is under the desk talking to Jerry, Steinbrenner can be heard in the background rambling on about random stuff.

Hal tells Elaine that Twinkies aren't cooked. In reality, they are cooked.

The song that Steinbrenner is trying to find the name of is Pat Benatar's 1979 song "Heartbreaker". The actual lyrics are, "You're a heartbreaker, dream maker, love taker, don't you mess around with me."

A scene in Jerry's apartment reveals the bottom of set lights. It is in the scene with Jerry and George, right after Elaine and Kramer leave.

One section of Jerry's new cupboards is supposed to be secured to the ceiling, but when George hits this section it noticeably swings back and forth.