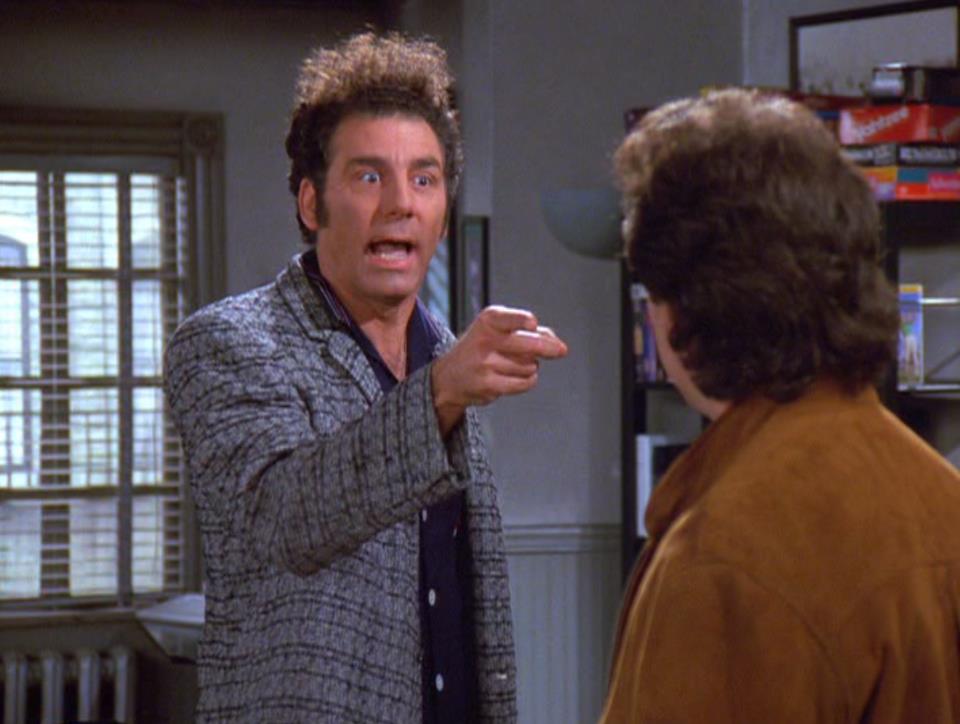 After Tim Whatley converts to Judaism, Jerry gets a sneaking suspicion that his motivation was the ability to tell Jewish jokes. Kramer and Mickey ask out two girls, but can't decide who will date which. Elaine tries to help some friends adopt a baby, but soon sees that she's in for more than she'd bargained for. Meanwhile, George isn't sure what to make of his latest girlfriend's frequent use of the phrase, "Yada yada yada..."

Jerry: Hi, Mr. Abbott.
Mr. Abbott: That's Dr. Abbott, D.D.S. Tim Whatley was one of my students. And if this wasn't my son's wedding day, I'd knock you teeth out you anti-dentite bastard.
Beth: What was that all about?
Jerry: Oh, I said something about dentists and it got blown all out of proportion.
Beth: Hey, what do you call a doctor who fails out of med school?
Jerry: What?
Beth: A dentist.
Jerry: That's a good one. Dentists.
Beth: Yeah, who needs 'em? Not to mention the Blacks and the Jews.

(George walks in on Jerry at Whatley's)
George: Oh, you're in here.
Jerry: What are you doing here?
George: I knew you had an appointment!
Jerry: Well this is very awkward!

(Jerry walks in, Kramer's just finished talking on the phone)
Jerry: Date with Karen?
Kramer: No, Julie. She's the one!
Jerry: What happened to Karen?
Kramer: Well, Mickey and her have a lot more in common. You know her parents are little people?
Jerry: Oh... small world.

(Jerry reenters the wedding hall after Beth's slur.)
Elaine: Where's Beth?
Jerry: She went out to get her head shaved.

Jerry: Elaine, the guy's Jewish two days, he's already making Jewish jokes.
Elaine: So what? When someone turns twenty-one, they usually get drunk the first night.
Jerry: Booze is not a religion.
Elaine: Tell that to my father.

Tim: You have no idea what my people have been through.
Jerry: The Jews?
Tim: No, the dentists. Did you know we have the highest suicide rate of any profession?
Jerry: Is that why it's so hard to get an appointment?

Jerry: So you won't believe what happened with Whatley today. It got back to him that I made this little dentist joke and he got all offended. Those people can be so touchy.
Kramer: "Those people", Listen to yourself.
Jerry: What?
Kramer: You think that dentists are so different from me and you? They came to this country just like everybody else, in search of a dream.
Jerry: Kramer, he's just a dentist.
Kramer: Yeah, and you're an anti-dentite.
Jerry: I am not an anti-dentite!
Kramer: You're a rabid anti-dentite! Oh, it starts with a few jokes and some slurs. "Hey, denty!" Next thing you know you're saying they should have their own schools.
Jerry: They do have their own schools!
Kramer: Yeah!

(Jerry's phone rings)
Jerry: Hello?
Saleswoman: Would you be interested in a subscription to the New York Times?
Jerry: Yes! Slams the phone down.

Tim: All right, it is cavity time. Ah, here we go. Which reminds me, did you here the one about the rabbi and the farmer's daughter? Huh?
Jerry: Hey.
Tim: Those aren't matzo balls.
Jerry: Tim, do you think you should be making jokes like that?
Tim: Why not? I'm Jewish, remember?
Jerry: I know, but...
Tim: Jerry, it's our sense of humor that sustained us as a people for 3000 years.
Jerry: 5000.
Tim: 5000, even better. Okay, Chrissie. Give me a stickle of fluoride.

George: You don't think she'd yada yada sex?
Elaine: I've yada yada'd sex.
George: Really?
Elaine: Yeah, I met this guy. We went out to dinner. I had the lobster bisque. We went back to his place. Yada, yada, yada. I Never heard from him again.
Jerry: But you yada yada'd over the best part.
Elaine: No, I mentioned the bisque.

Jerry: I gotta get on that Internet. I'm late on everything.

Father: Tell me your sins, my son.
Jerry: Well I should tell you that I'm Jewish.
Father: That's no sin.
Jerry: Oh good.

Jerry: You know the difference between a dentist and a sadist, don't you? Newer magazines.

Jerry: Don't you see what Whatley is after? Total joke-telling immunity! He's already got the big two religions covered. If he ever gets Polish citizenship, there'll be no stopping him.

(Jerry at confession)
Jerry: ... I wanted to talk to you about Dr. Whatley. I have a suspicion that he's converted to Judaism purely for the jokes.
Father: And this offends you as a Jewish person.
Jerry: No, it offends me as a comedian.

George: I gotta tell you, I am loving this yada yada thing. I can gloss over my whole life story.

Elaine makes a joke about Raquel Welch, who appears a couple of episodes later.

An opening dialog between Jerry and George about what to bring on a desert island was cut for syndication.

This episode was nominated for the 1997 Emmy Award for Outstanding Writing for a Comedy Series.

After Elaine has substantially finished peeling an orange the next cut shows most of the peel still on.