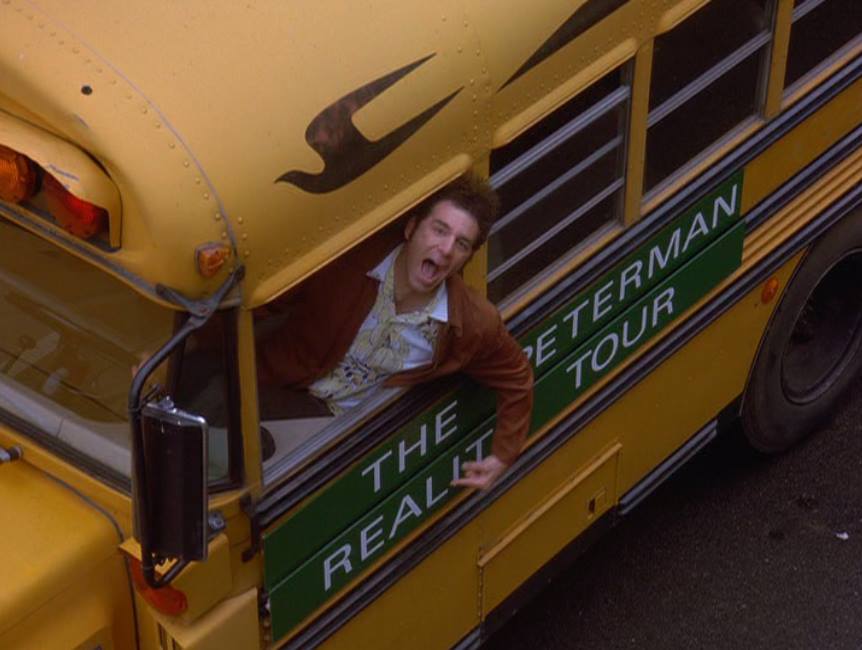 I'm starting a Peterman Reality Bus Tour. Check it out!

Upon learning that his stories were used in the Peterman autobiography, Kramer declares himself the "Real Peterman" and begins his own reality bus tour. When George is asked to watch a suitcase for a tourist that never claims it, George begins wearing his clothes, and starts up a relationship with a tourism director. Mr Lippman steals Elaine's idea for a business selling muffin tops, and brings her into the business for her muffin expertise. A shaving mishap leads Jerry to shave his chest.

George: All right, let me ask you something: When do you start to worry about ear hair?
Jerry: When you hear like a soft russeling.
George: It's like puberty that never stops. Ear puberty, nose puberty, knuckle puberty, you gotta be vigilent.
(during Kramer's reality bus tour)
Kramer: We have a bonus ultra-reality stop today. We're going to be hauling muffin stumps to the local repository.
Tourist We're going to a garbage dump?
Kramer: And we're off!
Jerry: You know, I never thought he'd be able to recreate the experience of actually knowing him, but this is pretty close.

George: (referring to Mary Anne's statement that New York would 'eat him alive') We'll see who can make it in this town.
Jerry: What is it she thinks you can't do?
George: Find a job, get an apartment.
Jerry: How did you do those things?

Jerry: So you're pretending to be a tourist?
George: It's beautiful. She makes all the plans. I'm not from around here, so it's okay if I'm stupid. And she knows I'm only in town visiting, so there's no messy breakups.

George: You know if you take everything I have accomplished in my entire life and condense it down into one day... it looks decent!

Jerry: I did something stupid.
Kramer: What'd you do?
Jerry: Well, I was shaving, and I noticed an assymmetry in my chest hair. And I was trying to even it out. And the next thing I know... Gone!

Jerry: Wait. Those are the clothes from the bag!
George: The guy never came back.
Jerry: He asked you to watch them, not wear them.
George: I'm still watching them.

Elaine: (describing Newman's ability digest heaps of food) They call him a cleaner. He makes problems go away.

George: Where are you meeting these women? When they get off the bus at the port authority?
Jerry: Right here, George. In here. (pointing to his chest) Try opening this up. You'll find the biggest dating scene in the world.
George: Thanks. Thanks a lot.

George: Let me ask you this: Do you know where Walker Street is downtown? I've got a league meeting there.
Jerry: Oh right, the new job, how is it?
George: I love it. New office, new salary. I'm the new Wilhelm.
Jerry:So who's the new you?
George: They got a new intern from Francis Louis High. His name is Keith. He comes in Mondays after school.

The same man from Jiffy Park ("The Wig Master") is also the attendant at Jiffy Dump.

The dog that is seen in the park is actually a Chinese Crested and not Mexican Hairless.

The "Peterman Reality Tour" is a spoof of Kenny Kramer's "Kramer Reality Tour", a New York City bus tour that points out actual locations of events or places featured in Seinfeld. Kenny Kramer was the inspiration for Michael Richards's character.

This episode marks Larry David's final "appearance" as George Steinbrenner until the series finale. He explains on the Season 8 DVD that he had started to feel uncomfortable speaking lines he hadn't written himself.

Every time there is an exterior shot of Yankee Stadium you can see a "7" banner. The Yankees honored Mickey Mantle, who had died the year before, by hanging the "7" banner.

In this episode, Elaine is telling her old boss, Lippmann, to take the exclamation point out of the title for his muffin shop. In "The Sniffing Accountant" (S05E04), Lippmann has Elaine remove the inordinate amount of exclamation points from a book she's editing.

The man on Kramer's Reality Tour bus who asks, "What is this? Pizza pound cake?" is actually Schlemo, the 'good' truck driver in "The Frogger".

The character Rebecca DeMorne also appears again in "The Bookstore", when George goes to the shelter to donate his "toilet book".

Tyler Chicken was supposed to be Tyson Chicken at one point, but was changed to avoid any legal entanglements.

At the end of "The Muffin Tops," Elaine has called upon the services of Newman to make their muffin-stump problem go away. His role is a direct reference to the Winston Wolfe character in "Pulp Fiction," including his mannerisms and choice of words.

At the end of the episode where Newman is going to eat the muffin stumps, he removes the milk bottles out of his bag but never fills his glass. When he starts eating the muffins, his glass is somehow full.