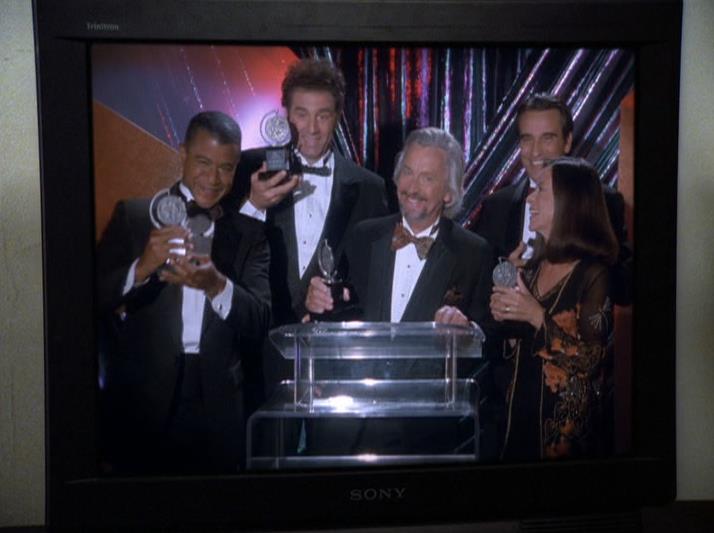 This has truly been a Scarsdale surprise!

Receiving three months pay as a severance package from the Yankees, George decides to make the most of his summer. Jerry asks out a waitress, but when she accepts, he's surprised to learn that she already has a live-in boyfriend. Elaine has trouble dealing with a female co-worker, but the situation is perceived by others as a "catfight". Kramer gets a job filling seats at the Tony Awards, and ends up receiving an award himself.

Jerry: When I went to pick her up there was this dude.
George: How do you know it was her dude?
Jerry: What, do you think it could've been just some dude?
George: Sure, dudes in this town are dime a dozen.
Jerry: I reckon.
George: Or maybe, she just wanted to go to the Tony's. I tell you what; you ask her out again. No Tony, just Jerry. That way you know it he was her dude or just some dude.
Jerry: Dude!

George: This was supposed to be the "Summer of George!"

(using George's 'mumbling under breath' escape at the Mump's)
Jerry: The one with the... the flavman

Jerry: So, has the summer of George begun? Or are you still decomposing?
George: Decompressing.

Kramer: I can't describe how great it is to win.
Jerry: That's because you didn't win.

Store Clerk: Have I seen you in here before?
George: About a year ago . . . wedding invitations.
Store Clerk: Oh, right. How'd that work out?
George: No complaints.

George: The Yankees are giving me three months full pay for doing nothing.
Jerry: They did it for three years, what's another few months?

Jerry: (in George's mind) What's the deal with airline peanuts?

Kramer: Jerry, you got any Tums?
Jerry: Stomach ache?
Kramer: I drank too much water in the shower.

George: Maybe the two of us, working together at full capacity, could do the job of one normal man.
Jerry: Then each of us would only have be like a half man. That sounds about right!

Jerry: Can you believe she expected me to squire her around town while the dude sits at home in swaddling clothes?
George: Do they make swaddling clothes for adults?
Jerry: It's like she's split the job of boyfriend into two jobs. Except the dude's playing the showroom and I'm stuck doing food and beverage.

Elaine: What is so appealing to men about a cat fight?
Kramer: Yeah, yeah, cat fight!
Jerry: Because men think if women are grabbing and clawing at each other there's a chance they might somehow kiss.

If you look at the awning outside Jerry's building; the building's name "The Shelley" has been painted over to hide the fact that it's filmed in California not New York City.

In this episode when Jerry is wearing just towels with his girlfriend, she asks him if he shaved his chest. Of course in the previous episode "Muffin Tops" Jerry did shave his chest.

In the scene where George is watching the Tony Awards and eating snacks, we get to see most of the contents of the built-in fridge in his armchair: Mug Root Beer, Sprite, Canada Dry Ginger Ale, Pepsi and fun-size Three Musketeers.

A new contract for Season 9 was signed around the time of this airing that would pay Jason Alexander, Julia Louis-Dreyfus and Michael Richards $600,000 each per episode. Until this time they had been receiving $160,000 each per episode. Jerry Seinfeld, as star, co-creator and producer would continue to receive approximately $1 million.

Writer Dave Mandel makes an appearance as the guy who asks George if he wants to play frolf (frisbee-golf).

When Kramer is at Sardi's, he says, "So I said to him, Arthur, Artie come on, why does the salesman have to die? Change the title! The Life of a Salesman. That's what people want to see." This is a reference to the 1949 play Death of a Salesman, written by Arthur Miller.

In the scene where George is phoning Jerry to see what's happening, Kramer has his jacket buttoned. However when he leaves it is suddenly unbuttoned.