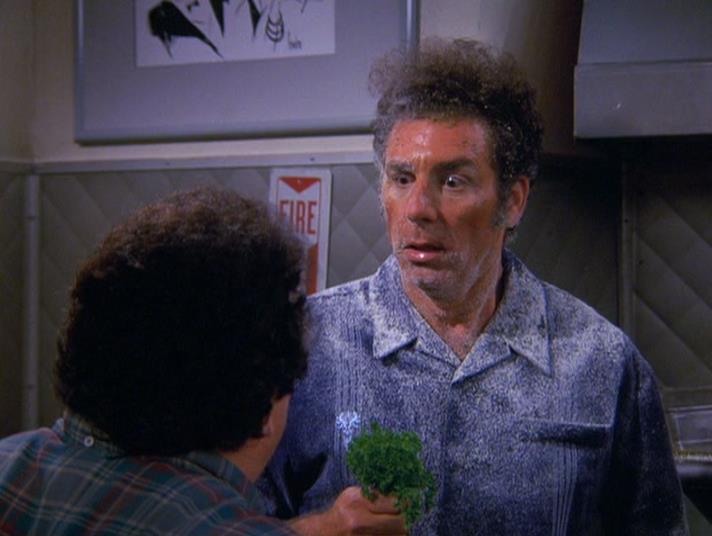 What is this, parsley?

Kramer discovers that butter is far superior to any shaving cream, but things go too far when he starts putting it on his body. George takes advantage when his new employer thinks he's handicapped. Jerry is annoyed when Kenny Bania is experiencing success by always following him. Meanwhile, Elaine has a nightmare of a return trip from a European vacation with David Puddy.

Elaine: (to Puddy) Please! I took you back. You know it, I know it, vegetable lasagna here knows it.
Vegetable Lasagna: (apologetically) I don't want to get involved.
Elaine: Ugh, I hope a giant mountain rises out of the ocean and we just ram right into it and end this whole thing!
Vegetable Lasagna: Oh god.

Bania: Hey, Jerry, did you see me up there? I was killing, Jerry, killing. I killed!
Jerry: Killed?
Bania: Killed! I'm gonna go pick up some chicks, Good looking ones too. Hey, what's your name?

(after hitting the senior's mobile scooter)
George: What's that the four volt? I did you a favor.

Kramer: Oh man, I think I cooked myself.

Jerry: (after George gets a scooter by faking a handicap) It must be comforting to know you'll be going straight to hell at no more than three miles an hour.

Jerry: They think you're handicapped? How can you do this?
George: Jerry, let's face it. I've always been handicapped. I'm just now getting the recognition for it. Name one thing I have that puts me in a position of advantage, huh?! There was a guy that worked at the Yankees...NO ARMS. He got more work done than I did! Made more money. Had a wife, a family. Drove a better car than I did!
Jerry: He drove a car with no arms?!
George: Alright I made up the part about the car, but the rest is true. He hated me anyway!
Jerry: Do you know how hard it's getting just to tell people I know you?

Kramer: Stick a fork in me Jerry, I'm done.

George: Well, I was buttering myself up for a nice shave-
Jerry: Oh no, not you too?
George: I must have dripped some on the floor and I slipped and...
Jerry: You know what's good for that? Relish.

George: I love that bathroom. It's got that high-high toilet. I feel like a gargoyle perched on the ledge of a building.

Kramer: Boy, a month in Europe with Elaine. That guy's coming home in a body bag!

Puddy: What's going on over there with you and, uh, vegetable lasagna?
Elaine: This guy? He's an idiot. He doesn't mean anything to me.
Passenger: I can hear you.

(Newman is sitting in the Coffee shop when the head of a Turkey turns into Kramer's head)
Turkey Kramer: Hey buddy! (waves wing)
(Newman panics and bolts from the restaurant)

George: Bania is the voice of a new generation; my generation!
Jerry: We're four months apart!

Jerry: You like Bania's act. You're a closet Bania fan!
George: Maybe I am.
Jerry: Oh, I'm gonna puke.
George: Puke! That's a funny word. Puke. (laughing) puke! Don't have to think about that.

Elaine: (to flight attendant) Hey, you gonna bust out that drink cart or what?

(Newman smells food in the air and thinks it's coming from Jerry's apartment)
Newman: You know, old friend, sometimes I ponder this silly gulf between us, and I say 'why?'. Are we really so different...
Jerry: I'm not the one doing the cooking, Newman.
Newman: Damn you Seinfeld. You're a useless pustule.

(Kramer starts rubbing a stick of
Jerry's butter across his face)
Jerry: Wait a minute. Do I have to ask?
Kramer: Well, I ran out of butter, so I had to borrow yours. Anything else, Mr. Nosey?
Jerry: Why are you buttering your face?
Kramer: I'm shaving with it.
Jerry: Oh, Moses smell the roses!

(Phone rings, Jerry answers.)
Jerry: Hello? Yeah, this is Jerry Seinfeld. What? No. No! No! No!! NO!!! Thank you.(hangs up) I don't believe this. They've added Bania to the network showcase and he's going on right after me.

(Jerry and George discuss Elaine's getting back with Puddy)
Jerry: (wisecracks) I guess she's batted around, and she's back at the top of the order.

The song "My Baby Takes the Morning Train" by Sheena Easton, was also used in "The Bizarro Jerry" as Kramer made his way to work. It was also used in the movie "Euro Trip", which was produced and written by Seinfeld writers Alec Berg, David Mandel and Jeff Schaffer.

Jerry refers to Bania as a "time-slot hit". This may be a reference to the fact that whatever show aired following "Seinfeld" was considered a time-slot hit.

When Newman is sitting next to Kramer (who is in the hot tub basting himself in butter) he is reading the book "Alive", a story of plane crash in the Andes where the survivors had to resort to cannibalism.

This episode was dedicated "In Memory of Our Friend Brandon Tartikoff." Tartikoff was a former president of NBC who was responsible revitalizing the network in the 1980s. He died of Hodgkin's Disease a month before this episode aired.

When Kramer explains to Jerry why he's started using butter on his face, he keeps waving the stick of butter in his hands around. At the end of the stick you can see his makeup that has rubbed off on the butter stick. Later, the makeup also rubs off on the slices of bread Jerry smears on his face.

Although he speaks with an accent the whole episode, "Vegetable Lasagna" clearly has no accent when he delivers the line "I can hear you."

A flight from Oslo to New York does not take 22 hours.

The exterior of the aircraft that Puddy and Elaine are flying in shows a silhouette of a Boeing 747. However, the interior shots of the plane two sets of rows of seats, one on each side, which is not the seat layout of a wide-bodied 747.

When Puddy is looking through his Norwegian coins he says "femti kroner" which is 50 kroner. In actuality, there is no coin of that value, only a bill.