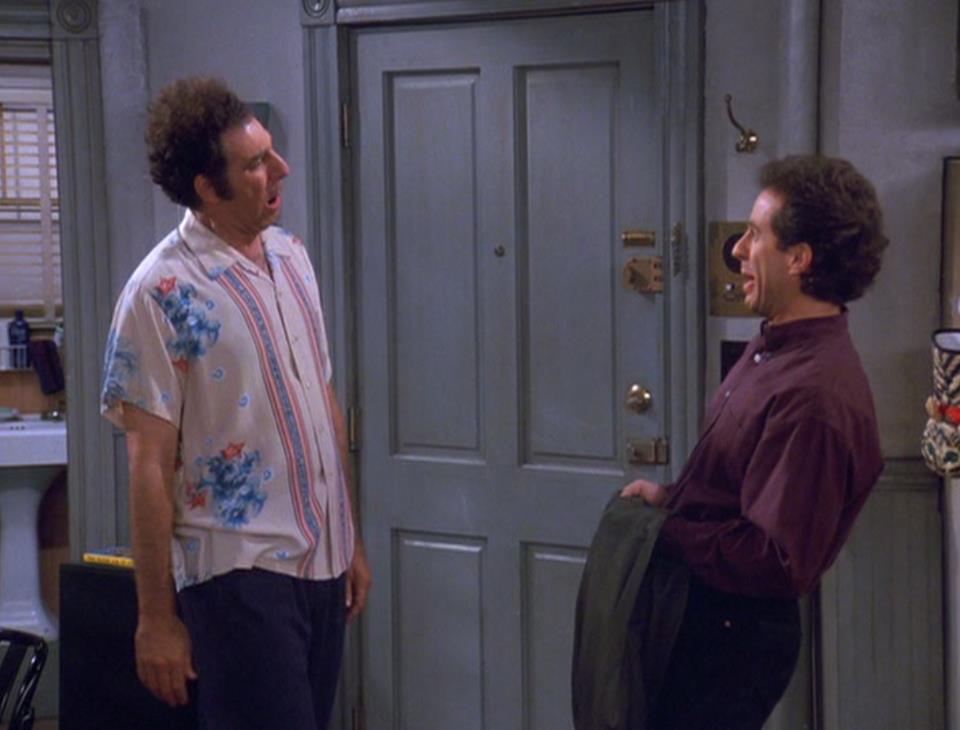 The gang start using a fun, booming, jovial voice, but when Jerry's girlfriend learns that the voice is supposed to represent her stomach, she makes Jerry choose between her and the voice. Elaine bumps into David Puddy, which leads them to get back together. However, despite her best efforts to stay apart from him, every time they break up, they end up sleeping together. Kramer decides that he wastes too much time, and therefore gets an intern from NYU. Meanwhile, now that George's boss knows he isn't handicapped, the two engage in a battle of wits over whether George keeps working at Play Now.

Elaine: (referring to her latest run-in with Puddy) It's an isolated sexual incident. We are not back together!
Jerry: Then what do you call it? People don't just bump into each other and have sex. This isn't Cinemax.

Kramer: I come up with these things, I know they're gold but nothing happens. You know why?
Jerry: No resources, no skill, no talent, no ability, no brains, no...
Kramer: No, no time! It's all these menial tasks. Laundry, grocery shopping, coming in here and talking to you. You have any idea how much time I waste in this apartment?
Jerry: I can ballpark it.

George: You broke up with her? Why?
Jerry: So we could do the voice. La-la-la. What's the matter?
George: I think I'm getting tired of it. I mean is that all it does? "Hello? La-la-la?"
Jerry: No, it can do anything. It can be Spanish Spanish. (doing the voice) Hola. Hello-o-o-o.
George: I think I like the girl better than the voice.
Jerry: Really?

Jerry: Breaking up is like knocking over a Coke machine. You can't do it in one push. You gotta rock it back and forth a few times, and then it goes over.

Kramer: Whew. You know Darren, if you would have told me twenty-five years ago that some day I'd be standing here about to solve the world's energy problems, I would've said you're crazy. Now let's push this giant ball of oil out the window.

Darren: Mr. Seinfeld went to the restroom, at which point Mr. Costanza scooped ice out of Mr. Seinfeld's drink with his bare hands, using it to wash up. (Jerry stops drinking mid-sip) Then Mr. Costanza remarked to me, "This never happened." (Jerry spits out water).

George: (on phone after breaking into office) Hello Marjorie, George Costanza. How are you sweetheart? Listen, can you give Mr. Thomassoulo a message for me? If he needs me, tell him: "I'M IN MY OFFICE!!!"

Jerry: (to George) So, basically, you can withstand anything except actual work.

George: Oh, you might want to stick around Jerry. Mr. Thomassoulo picked the wrong man - to hire because he was fake handicapped.

Dean Jones: It seems to me that Kramerica Industries is little more than a solitary man in a messy apartment, which may or may not contain a chicken!
Kramer: And with Darren's help, we'll get that chicken!

Mr. Thomassoulo: George, I think it would be better if we went our separate ways.
George: I don't understand.
Mr. Thomassoulo: We don't like you; we want you to leave.
George: That's clearer.

Jerry: I put a six hour tape in. That should cover the experiment, the arrest, and most of your trial.

In this episode, this bench on the pier is again used as Jerry daydreams about doing "the voice," and runs off to choose it over Claire.

The Dean at Darin's University is named Dean "Jones". Dean Jones is a veteran actor whose first film appearance was in 1956's "Somebody Up There Likes Me". He has appeared in many Disney movies, including the original 1968 film "The Love Bug".