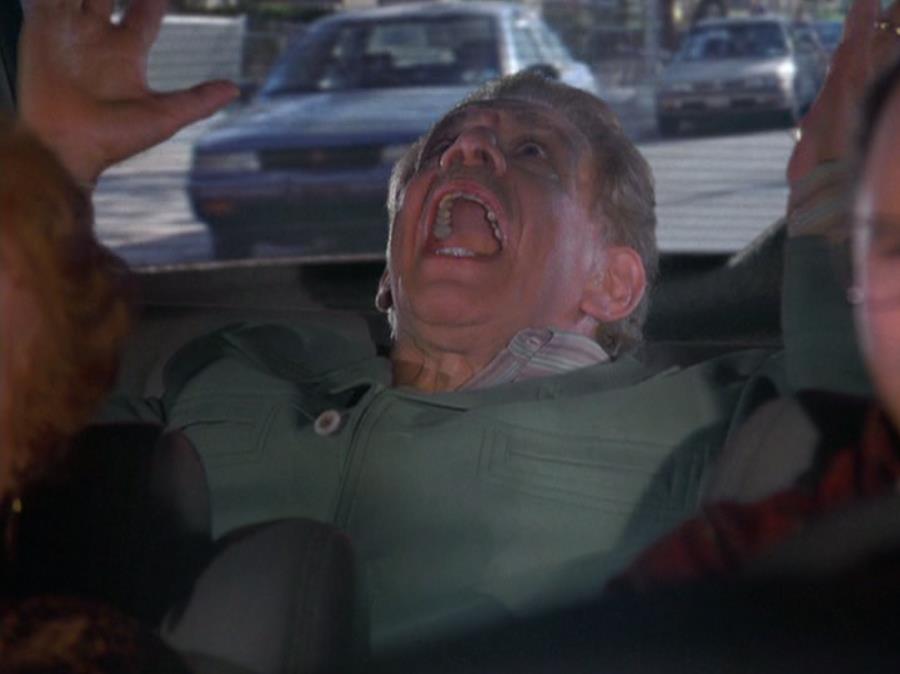 George gets roped into selling computers with his father, who is using a strange relaxation method to control his blood pressure. Kramer has some trouble with the "neighborhood children" when he remodels the front of his apartment. Jerry's latest girlfriend helps him get in touch with his emotions. Meanwhile, Elaine's invitation to a bar mitzvah ends up being more than she bargained for.

George: (Walking in as Jerry is kneeling in order to propose to Elaine) Something wrong with your leg?

Jerry: You've heard me yell.
George: Not really. Your voice kind of raises to this comedic pitch.

Jerry:I don't know what's happening to me.
Kramer: Simple. You let out one emotion, all the rest will come
with it. It's like Endora's box.
Jerry: That was the mother on Bewitched. You mean Pandora.
Kramer: Yeah, well, she... had one, too.

Elaine: What happened to the new Jerry?
Jerry: He doesn't work here anymore.

Frank: Starting tonight we're having a little sales contest. The loser gets fired. The winner gets a Water Pik.

Elaine: What's the matter?
Jerry: It's Patty.
Elaine: Jerry, you break up with a girl every week.
Jerry: What is this salty discharge?
Elaine: Oh my God, you're crying.
Jerry: This is horrible. I care.

Jerry: George, letting my emotions out was the best thing I've ever done. Sure, I'm not funny anymore, but there's more to life than making shallow, fairly obvious observations.

Elaine: If you weren't Jewish, you wouldn't be interested in me.
Mr. Lippman: You are wrong. I'll prove it.
Elaine: Oh, no. Don't!
Mr. Lippman: I renounce Judaism!
Elaine: Oy, vey!

George: (referring to Jerry and Elaine) You know, all these years, I've always wanted to see the two of you get back together.
Elaine: Well, that's because you're an idiot.

Kramer: Y'all come back reeeeal

This episode's plot was inspired by real-life events in the life of writer Steve Koren. While driving with his arguing parents, Koren was bewildered to hear his father shout "Serenity now!" at the top of his lungs as part of a rage controlling exercise his doctor had told him about.

When Frank tells George about how he became interested in computers, he mentions he saw a movie called ""The Net", with the girl from the bus". He is referring to the movie The Net, starring Sandra Bullock, who also starred in Speed, about a city bus armed with bombs by a terrorist.

The sales contest Frank Costanza institutes (where the highest seller is rewarded and the lowest is fired) is a parody of the 1991 movie "Glengarry Glen Ross".

Kramer mentions to Jerry that he was ambushed with eggs by the "neighborhood kids", including Joey Zanfino, whom Kramer previously babysat in "The Wait Out" and shared a karate class with in "The Foundation".

When George asks Kramer if he wants to go to Queens, Kramer was looking in Jerry's fridge. As Kramer walked away, the fridge door remained open. However, in the next shot the fridge is closed.

The second time we are in Frank's garage the handwriting on the chalkboard changes between shots: note the Gs in "GEORGE".

In the scene when George first shows up for work in Frank Costanza's garage, Lloyd Braun hands Frank Costanza a cup of coffee that is obviously empty.

When George moves a dolly holding boxes of computers, the boxes shake like they are empty.