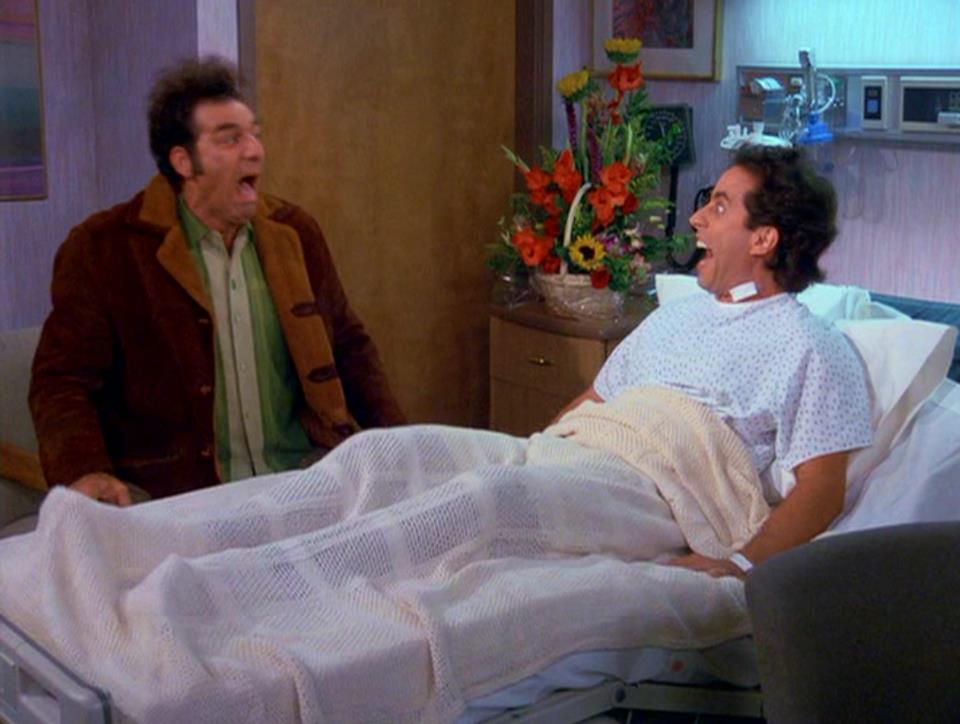 You got three pints of Kramer in you, buddy!

Jerry has an encounter with an Exacto knife and ends up having an infusion of 3 pints of Kramer's blood infused into him because Kramer decided to store his blood. Jerry's parents buy him sessions with personal trainer, Izzy, who's going to help him work off his spare tire because they are concerned with his lack of exercise. George decides that adding television and food to his equation will make sex even better. Elaine visits her friend Vivian and is disappointed when Vivian implies that she isn't responsible enough to watch her son Jimmy, so she works overtime to prove how responsible she is.

Jerry: Is this about me?
Elaine: No.
Jerry: Well, then I've lost interest.

(on Kramer's blood transfusion)
Jerry: I can feel his blood inside of me... borrowing things from my blood!

Jerry: Why are you calling my parents?
Kramer: Well, if you called a little more often, then maybe I wouldn't have to.

Jerry: If even one corpuscle of that blood should find its way across that hall, I will freak out on you. Freak out!
Kramer: You know, for a fat guy you're not very jolly.

Kramer: Well, somebody's baby-sitting.
Elaine: You? I'm more responsible than you are!
Kramer: Don't be ridiculous. Now, if you'll excuse me, I have to go to fill my freezer with my own blood.

(George is moaning while eating a sandwich and watching a portable TV under covers)
Tara: George, what are you doing? (pulls covers off of him)
George:(with mouthfull) Pleasuring you?

Kramer: If I'm out on the street and it starts to go down, I don't back off until it's finished.

Elaine: I couldn't raise a kid? C'mon, I love bossing people around.

(Elaine looks very tired while babysitting Jimmy)
Jimmy: (pointing a toy gun at Elaine) You're dead President Lincoln, you're dead!
Elaine: I wish I was dead.

George: (in bed) You got your strawberries, your chocolate sauce, your pastrami on rye with mustard...

Kramer: (to Jerry who received a blood transfusion) You've got three pints of Kramer in you, buddy!

George: I flew too close to the sun on wings of pastrami.
Jerry: Yeah. That's what you did.

(when she finds out Kramer is babysitting instead of her)
Elaine: I'm more responsible than you are!
Kramer: Don't be ridiculous. Now if you'll excuse me, I have to go fill my freezer with my own blood.

Vivian: I find pastrami to be the most sensual of all the salted, cured meats.

Jerry: So, how's the Fornicating Gourmet?
George: Doing quite well, thank you. Yesterday I had a soft-boiled egg and a quickie. You know what? If I could add TV to the equation, that would really be the ultimate.

George: Food and sex, those are my two passions. It's only natural to combine them.
Jerry: Natural? Sex is about love between a man and a woman, not a man and a sandwich.
George: Jerry, I'm not suggesting getting rid of the girl. She's integral.
Jerry: Maybe instead of trying to satisfy two of your needs, how about satisfying oneof somebody else's?

Lloyd Bridges received an Emmy nomination in 1998 for Outstanding Guest Actor in a Comedy Series for playing "Izzy Mandelbaum" in this episode.

The writers have said this episode is so dark they considered making it a Halloween episode.

If you look closely when Vivian turns on the TV, you can clearly see an episode of 'Seinfeld' on the screen.