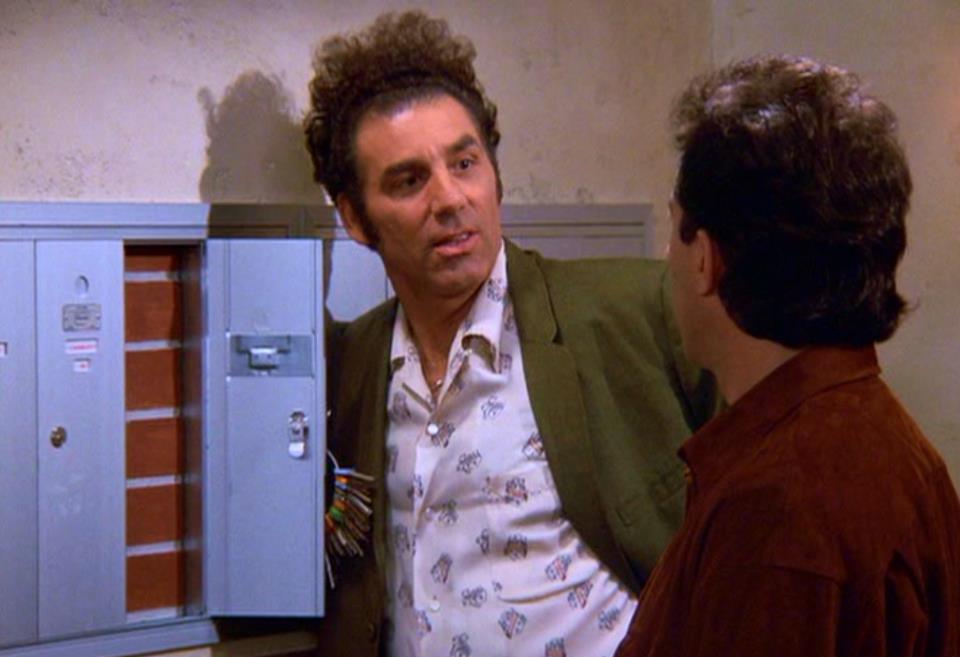 Rain and sleet may not stop them but let's see them get by these bricks.

Jerry's childhood friend arranges for a van as payment for one of Jerry's performances. Kramer uses the van in his campaign against mail. Elaine meets a man at the coffee shop whose charm seems too good to be true. Meanwhile, George discovers that his parents have had enough of him.

Kramer: How many miles?
Jerry: Two.
Kramer: City or highway?
Jerry: Look, do you really wanna buy this thing or what?
Kramer: Hey, hey, hey! Take it easy! I'm not gonna be pressured. I'll walk away right now!

Puddy: You dumped me for some idiotic TV pitchman.
Elaine: Look, I'm sorry, Puddy. It was a mistake. So, let's just put it behind us, and we can continue like this never happened.
Puddy: Gee, I don't know. What if we're out somewhere and you see the Maytag repairman?

Kramer: Oh that's it, they have gone too far!! They keep pushin' me and pushin' me, and now I have no choice but to go down there...and talk to them.

Elaine: He's the Wiz, and nobody beats him! Nobody...

(George is sitting on the kitchen counter in the dark when his parents come in)
George: (When the lights come on) Welcome back. (Estelle jumps in surprise) Pretty quick for a catered event isn't it?

Jerry: So, you wanna grab a bite?
George: I can't. I gotta make the weekly call to the folks.
Jerry: So call now.
George : I gotta prep. I need a couple of anecdotes; a few "you were rights". It's a whole procedure.

George: Why is the mailman wearing a bucket?
Kramer: Huh? Well, it symbolizes our persecution.
George: Then...shouldn't YOU be wearing the bucket?

(frustrated by his parents after looking in their fridge)
George: No Chinese food, George is getting suspicious!

Jerry: So, what do you know about this Jack fellow?
Elaine: Isn't he the best?
Jerry: Yeah, nobody beats him.

George: Elaine's dating the Wiz? That's kind of pathetic.
Jerry: I know, they're not even related.

Kramer: Rain or snow may not stop them, but let's see them get past these bricks.
Jerry: Where'd you get the bricks?!
Kramer: Jerry...the whole building is brick!

Puddy: Seriously, is this the best okra you've ever had or what?
Elaine: Mmmmm. Dee-lish.
Puddy: Delish?
Elaine: Delish... you know, short for 'delicious.'
Puddy: Ah...like 'Scrump'.
Elaine: ...Yeah.

Wilford Brimley's guest appearance as Post-Master General of the United States was an homage to the actor's father, a postmaster.

When Wilford Brimley threatens Kramer it is a reference to Brimley's performance within "Absence of Malice (1981)" where, as an Assistant U.S. Attorney General, Brimley threatens a room full of lawyers and subordinates using similar statements.

When Newman pulls alongside Kramer and tells him, "this is the way it will happen, someone you trust will ask you to get in the car with them," it I s a parody of Max von Sydow's final scene within "Three Days of the Condor" (1975).

In the closing credits, the "Nobody Beats the Wiz" theme plays over the Castle Rock logo.

When Newman is arguing with Kramer about the uselessness of mail the amount of sweat on his face changes between shots.

When George drives the van to the park with his cousin, it is clearly seen from an overhead shot that a larger man in a brown shirt is driving and not George.

When Kramer and Jerry come in offering to help write the ad to sell the van, Jerry's table has nothing on it as Kramer starts pulling a piece of paper out of his jacket pocket. When we see him starting to write an envelope appears on the table.