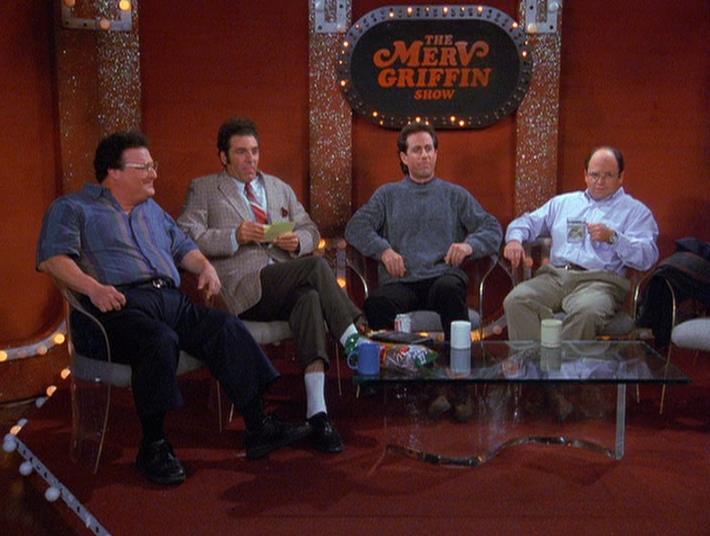 Smile, everyone! We're back!

After Kramer finds the set of the old Merv Griffin Show in a dumpster, he begins to treat his entire life like a talk show. Jerry's new girlfriend has a priceless toy collection that she won't let him play with, with leads him to some questionable behavior. George runs over a squirrel with his car, and he's forced to spend time and money on its recovery. Elaine has to find a way to deal with a new co-worker, whose 'sidling' is both annoying and potentially dangerous to her job.

Elaine: Kramer, what is wrong with you?
Kramer: What do you mean?
Elaine: Well for starters, you're looking at note cards.

Kramer: It's the Merv Griffin set.
Jerry: How did you get this in here?
Kramer: You just bring it in sideways and hook it.
Jerry: So where are you gonna sleep?
Kramer: Backstage.

Kramer: Jerry, Now what you do with your personal life is your business but when you're on my set, you clean it up mister!

(George swerves to avoid a pigeon on the road)
George: Did you see that? The pigeon didn't move!
Miranda: (upset) What pigeon? You just hit that squirrel! (Exits the car)

George: Don't we have a deal with the pigeons?
Jerry: Of course we have a deal. They get out of the way of our cars...we look the other way on the statue defecation.

Jim Fowler: (appearing on Kramer's set) Where are the cameras?

Jerry: Why were you making gravel?
Kramer: Well, I like the sound it makes when you walk on it.

Celia: (to Jerry) If you think you can drug me and play with my toys you've got another thing coming buddy!
Newman: Go Girl!

Elaine: I am going to sidle the sidler.
Jerry: You sidle? You stomp around like a Clydesdale.
Elaine: Not with these honeys... Wrestling Shoes.
Kramer: Only in New York!!

Elaine: It happened as I was making cup-a-soup, singing that song from "The Lion King."
Jerry: 'Hakuna Matata'?
Elaine: I thought I was alone.
Jerry: That doesn't make it right.

Kramer: It was a grind having to fill 10 hours a day. I'm not sure I was ready to have my own talk show set.

George: (about the squirrel he has to care for) It's not a pet. It's a wild invalid. And it knows that I tried to kill it. As soon as it gets better, it's gonna gnaw my brain out in my sleep.

Kramer: What is this? Amateur hour?

Elaine: There's this creepy new guy at work. He just comes out of nowhere and he's right next to you.
Jerry: So he just sidles up.
Elaine: That's right. He's a real sidler.

Kramer: We're like Cain and Abel.
Jerry: You know Cain slew Abel.
Kramer: No he didn't. They were in business together...drywall or something.
Jerry: The way I remember it, Abel worked all summer harvesting his crops, while Cain just played in the field. Then when winter came, Abel had all the nuts. Cain had no nuts. So he killed him.
Kramer: See, the way I remember it, Cain - he was a successful doctor, but when he took this special formula, he became Mr Abel.
Jerry: You broke my blender, didn't you?
Kramer: Yeah, I was trying to make gravel, and it just, didn't work out.

Newman: Lately I've been eating the generic brand of wax beans. I rip off the label and, I can't tell the difference...
Kramer: Well we've officially bottomed-out. Who's our next guest?
Newman: We've got no one!
Kramer: We need a new foremat. We should shut down and re-tool.
(Kramer pulls the plug and the show goes dark)
Newman: What about a guest-host?
Kramer: I'll pretend I didn't hear that.

When Kramer "takes a break" to warn Jerry about his questionable content, the music he plays is the theme music for the pilot of "Jerry" from season 4 (The Pilot - Part 2).

Kramer plays his pre-recorded theme music as George enters, and eventually, a voice comes on and says "Turn music off". This is the second time this joke has been used. A similar instruction was recorded on the tape of banjo music Kramer used for his "Peterman Reality Tour" in Season 8's "The Muffin Tops".

When Kramer says, "OK let's take a break!" and then proceeds to down some chips and Diet Coke... when he burps, watch George very closely as Jason Alexander has difficulty holding back his laughter.

The theme from The Merv Griffin Show plays over the Castle Rock logo at the end of the episode.

When Elaine gives the Tic Tacs to her co-worker, every time he walks around, you hear a rattling sound; however, the first time she gives it to him and he walks to the door there is no sound.