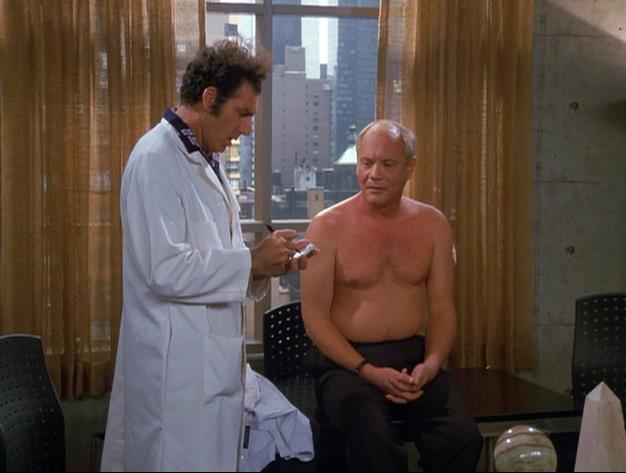 Unsatisfied by the quality of commercially cut meats, Kramer buys his own meat slicer, and takes things a bit too far. Elaine can't catch a break, as her neighbor's alarm clock and cat drive her crazy. Jerry gets annoyed when the dermatologist Elaine set him up with won't stop talking about 'saving lives'. Meanwhile, George's new job is in jeopardy when a photo reminds him of a nasty confrontation he'd had with his new boss years earlier.

Elaine: How was the doctor date?
Jerry: It died on the table.

Jerry: You call yourself life saver, I call you pimple popper MD!

Kramer: I haven't had a decent sandwich in thirteen years.

George: This Kruger guy is clueless. I can't wait to work for him.

Kramer: I've cut slices so thin, I couldn't even see them.
Elaine: How'd you know you cut it?
Kramer: Well, I guess I just assumed.

George: You simply must apologize.
Jerry: Must I?
George: Yes! Because it is the mature, adult thing to do.
Jerry: How does that affect me?

Kramer: Yes, but where does the meat go?

Dr. Seredes: Do you have any idea what it's like to save someone's life?
Jerry: Is it anything like hitting a homer in softball?!
Dr. Seredes: No.
Jerry: Cuz I hit a whopper last week!

George: So I set up a screening, everyone takes their shirt off and click, I snap me a shot of a bare-chested Kruger.
Elaine: You have a little thing for this fella'?

Kramer: Why would I, a Juilliard-trained dermatologist, send [Kruger] to another doctor?

George: Saving lives? She's one step above working at the Clinique counter.
Jerry: Dermatologists. Skin doesn't need a doctor.
George: Of course not. Wash it, dry it, move on.

Kramer: And Jerry, we are gonna need a case of Kaiser Rolls.
Jerry: I think we might have some left in the stockroom.
(Later on in the episode)
Kramer: Oh yeah, I couldn't find that stockroom!

Before Elaine is awakened by her neighbor's alarm, she has a dream where she's in bed with Jerry, George and Kramer. This scene is edited from the syndicated version.

When Elaine thinks it's her alarm clock buzzing, we see it's 3:30. However, seconds later when she screams, the clock shows 3:29.

Kramer estimates that the space under Elaine's neighbor's door is about half a millimeter. In actual fact, it's more like a full centimeter.

When Dr. Sitarides storms out of the exam room, she goes from the door to halfway across the hall in an impossibly short time.