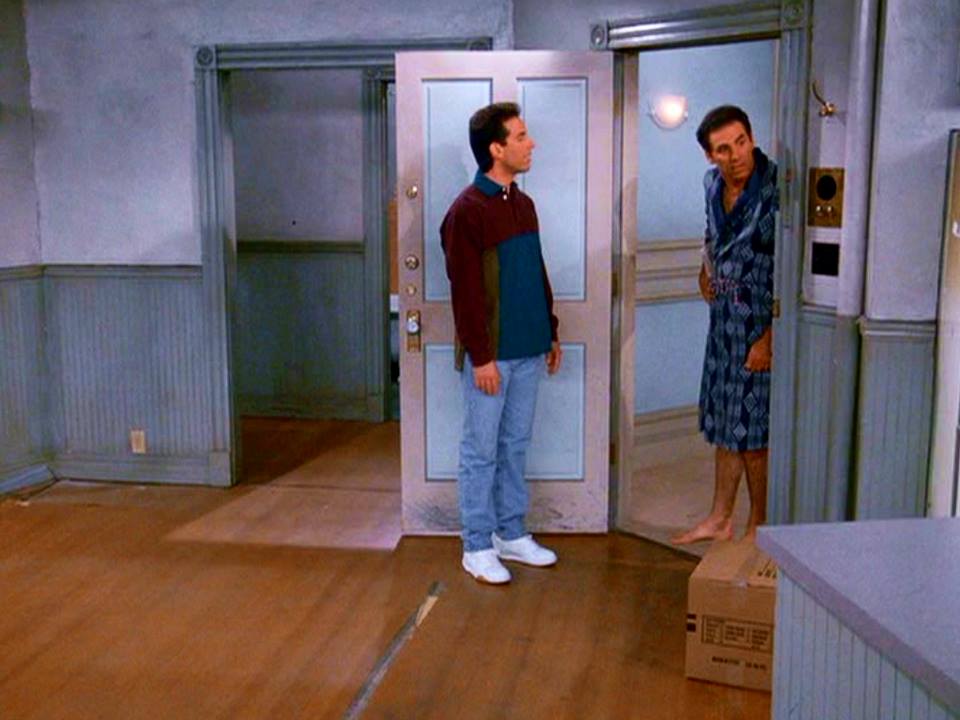 We're neighbors. What's mine is yours.

In this unique, "backwards" episode, Jerry, George, and Elaine go to India for Sue Ellen Mishky's wedding. Meanwhile, Kramer stays behind in New York and tries to "out wish" a friend who wants him to drop dead.

Elaine: (drunk and peering through the slats in Jerry's door) Goodnight, Jugdish!

Kramer: Franklin Delano Romanowski: I go to his birthday party, and just before he blew out his candles, he gives me this look.
George: Stink eye?
Jerry: Crook eye?
Kramer: Evil eye.
Elaine: I'll put it in the vault.
Jerry: No good. Too many people know the combination.
Elaine: What combination?
Jerry: *mimes drinking schnapps*
Jerry: Hey, Kramer, wait up. I'll go with you.
Kramer: I'm goin' to Newman's!
Jerry: (follows Kramer) Great, I love Newman!

Elaine: Oh boy. There's Sue Ellen. She didn't want me at this wedding, but here I am with a bunch of my idiot friends!
Jerry: (enthused) This is gonna be great!

George: So, how come nothing ever happened between you and Nina? (suspicious)Is there a problem with her? Is she a man?
Jerry: Are you?

Elaine: What's that smell?
Jerry: I think it's the stench of death.

Usha: Don't go. India is a dreadful, dreadful place.
Zubin: You know, it's the only country that still has the plague? I mean the plague! Please!

George: You can stuff your sorries in a sack, mister!

George: (whispering) Look, we are gonna settle this right now! I demand reparations! I should get to sleep with Elaine. That's the only way to punish you!
Jerry: That doesn't punish me. It punishes Elaine! And cruelly, I might add.

Jerry: Well, everybody's a little cranky on their birthday.
George: Oh, it's a bad day. You got everyone in your house, you're thinkin', "These are my friends?!"
Jerry: (Sarcastic) Every day is my birthday.

Newman: I'll tell you a little secret about zip codes; they're meaningless!

Elaine (drunk): What if I got myself a nose piercing? That'd be pretty freaky!

Elaine: The wedding is in one week. I got this (Holds up invitation) today.
Jerry: So you think it's a "non-vite"?
Elaine: It's an "un-vitation"!

Kramer: Does your girlfriend have to be here?
Newman: Does yours? *camera pans to Jerry*

Elaine: Would you grow up, George?! What is the difference? Nina slept with him, he slept with me, I slept with Pinter. Nobody cares! It's all ancient history.
George: (very loud) You slept with the groom?!
*room goes silent*

Newman: (To his new girlfriend) You see, my dear, all certified mail is registered but registered mail is not necessarily certified.
Girlfriend: I could listen to you talk about mail all day.

At the end of the episode, Jerry calls Kramer, "Kessler". This is a reference to the fact that Kramer's name was originally going to be Kessler, and that Jerry even calls him by that name in the pilot. Incidentally, in syndication, the scene is edited to remove Jerry accidentally calling Kramer "Kessler".

The backwards episode "The Betrayal" is based on a Harold Pinter play, "Betrayal", which also uses the same gimmick. Sue-Ellen Mishke's fiance in the episode is named Pinter in tribute to the playwright.

As the episode continues backward in time, Heidi Swedberg returns as George's girlfriend/fiancee, Susan, even though the character died in the Season 7 finale, "The Invitations".

There is a deleted scene where Elaine says, "I think I chipped a tooth", and then you see five minutes earlier where she rolls her head backwards with a Schnapps bottle held in her teeth.

Andy Ackerman won the Director's Guild of America Award for this episode.