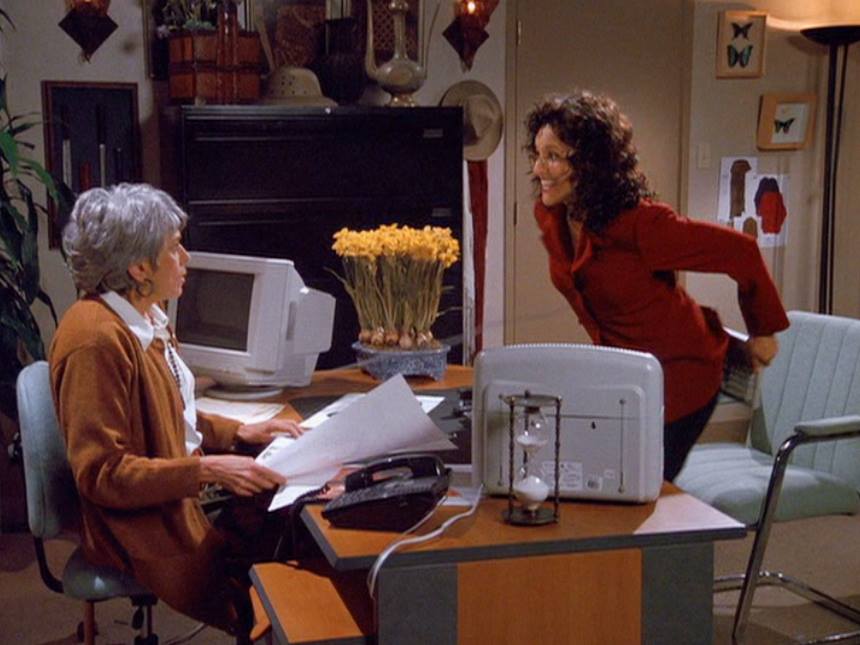 You think I've got germs? I'll give you some germs.

George is obsessed with getting an apology from an acquaintance now working on step nine of Alcoholics Anonymous. Jerry is surprised when his girlfriend spends all her time naked. Elaine is annoyed when a female coworker is turned off by her germs. Kramer has a unique solution when he discovers he's spending too much time in the shower.

Jerry: He took you to Rage-aholics? Why?
George: Probably because this whole universe is against me!
Jerry: I think you've got a little rage.
George: I know. And now they want me to bottle it up. It makes me so mad!
George: (about Henke) Instead of an apology, he was be-boppin' and scattin' all over me.

Jerry: What is wrong with my body?
Elaine: Chicken wing shoulder blades.
Jerry: Is that it?
Elaine: No but that's one problem, why?

George: This bread has nuts in it!

Kramer: Well, here's my shower routine. Maybe I could make some changes. Wash cloth mittens and maybe some liquid soap, and just focus!

Kramer: You went to the coffee shop without me? I told you I just wanted to hop in the shower.
Jerry: That was an hour ago. What were you doing in there?
Kramer: Showering. How long's it take you?
Jerry: Ten minutes.
Kramer: Ten minutes? That's kooky talk.

George: It's like you're living in the Playboy Mansion! Did she frolic?
Jerry: I don't really have enough room.

George: I'm not here for rage, I'm here for revenge.

Puddy: Puddy
Kramer: Is David Puddy there?
Puddy: This is Puddy.
Kramer: Well this is Kramer.
Puddy: I know.

Elaine: This food was in the shower with you?
Kramer: Mmm hmm... I prepared it as I bathed.

(on Kramers shower routine)
Jerry: You're probably wasting time working piece-meal, first cleaning one area and then another.
Kramer: Well, that's how cats do it.
Jerry: But when you have a faucet instead of a tongue, you want to use gravity.

Elaine: The female body is a work of art. The male body is utilitarian. It's for gettin' around. It's like a Jeep.

Elaine: (about her co-worker) This is all in her mind, okay? She is insane. She thinks I made her sick because I coughed on her doorknob, rubbed her stapler in my armpit, and put her keyboard on my butt. Yeah... She's a whacko.

(getting mad at an anger management class)
George: Am I talking to you Pinhead?

Kramer: (observing men in a gym shower) Oh yeah yeah, I'm watching you too, but this guy's really showing me something.
Henke: Alright George, alright. I'm sorry. I'm very very sorry. I'm so sorry that I didn't want your rather bulbous head struggling to find its way through the normal size neckhole of my finely knit sweater.

George: So she coughed.
Jerry: Coughing? Naked? It's a turn-off, man.
George: Everything goes with naked.
Jerry: When you cough there are thousands of unseen muscles that suddenly spring into action. It's like watching that fat guy catch a cannonball in his stomach in slow motion.
George:You spoiled spoiled man. You know how much mental energy I expend just trying to picture women naked?
Jerry: But the thing you don't realize is that there's good naked and bad naked. Naked hair brushing - good. Naked crouching - bad.

When George is tricked into going to rageaholics anonymous, the actor playing the man at the podium is David Dunard. He was also the security guard in Season 3 "The Parking Garage", and he also made an appearance in the series finale, again playing a security guard.

Although Jerry's girlfriend goes about the apartment supposedly naked, you can clearly see that some type of white garment or undergarment is covering her breasts when she gets up from the table while they are playing Scrabble. Later, when Jerry brings out the belt sander and is supposed to be naked, you can see the top of the pants he is wearing.

Peggy is presented as a germaphobe, but she readily drinks water from the bottle from which Walter had just drunk.