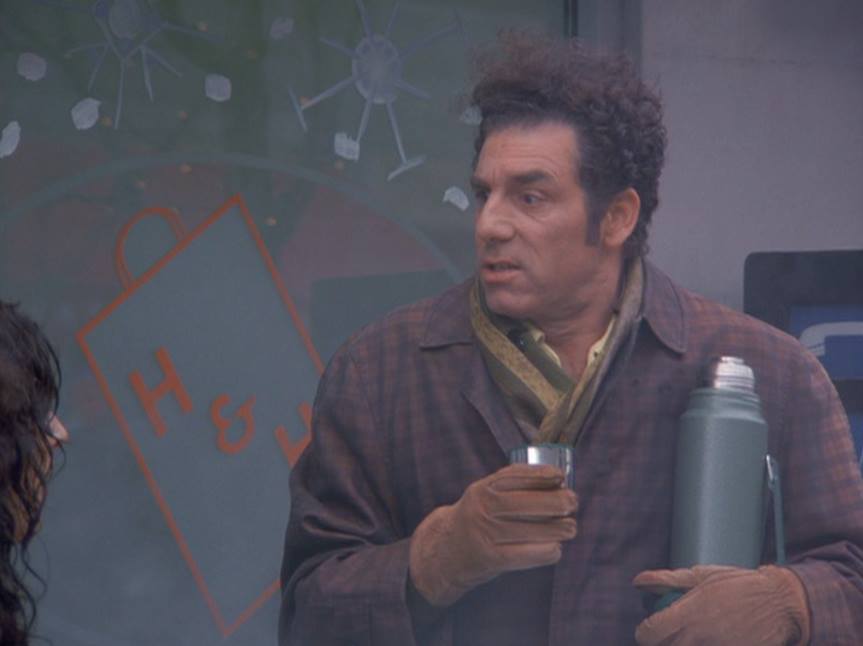 An increase in the minimum wage is enough to finally meet the demands of the striking employees of H&H Bagels, and as such, Kramer announces that after 12 years, he's going back to work. Jerry meets an attractive woman at a party, but when he later tries to date her, she doesn't look nearly as good. Elaine's use of a fake phone number backfires when she loses a card that will entitle her to a free sandwich. George tries to get away with giving away fake donation cards as Christmas gifts at work, and much to his chagrin, his father decides to revive Festivus, a unique holiday he'd invented years earlier.

Jerry: Why didn't you ever mention this?
Kramer: Jerry, I didn't want you to know I was out of work. It's embarrassing.

Kramer: H&H wouldn't let us use their bathroom while we were picketing. It put a cramp in our solidarity.

Jerry (surprised): Gwen, what are you doing here?
Gwen: Kramer told me you were here.
Kramer (excited): Another Festivus miracle!

George: (on Gwen) She's a two-face.
Jerry: Like the Batman villain?
George: (condescending) If that helps you.
Jerry: So if I ask her out again, I don't know who's showing up -- the good, the bad, or the ugly.

Jerry: You might not know it to look at me, but I can run really really fast.

Jerry: When George was growing up, his father hated all the commercial and religious aspects of Christmas, so he made up his own holiday.
Elaine: Oh... and another piece of the puzzle falls into place.

George: I got him Yankees tickets! He got me a piece of paper saying, "I've given your gift to someone else!"

George: I'm embracing my roots.
Jerry: They got you on the 20G's?
George: Busted cold.

Jerry: You don't need the card. High-end hoagie outfit like that, it's all computerized!(Snaps) They're cloning sheep now.
Kramer: (Correcting) No, they're not cloning sheep. It's the same sheep! I saw Harry Blackstone do that trick with two goats and a handkerchief on the old Dean Martin show!

Jerry: Nice cuff links, by the way.
George: Office Christmas gift. I tell you, this Human Fund is a gold mine!
Jerry: That's not a French cuff shirt, you know.
George: I know. I cut the button off and poked a hole with a letter opener.
Jerry: Classy.

Frank: Many Christmases ago, I went to buy a doll for my son. I reached for the last one they had, but so did another man. And as I rained blows upon him I realized there had to be another way.
Kramer: What happened to the doll.
Frank: It was destroyed, but out of this came a new holiday, 'a Festivus for the rest-of-us.'
Kramer: That must of been some doll.
Frank: SHE was!

Frank: At the Festivus dinner, you gather your family around and tell them all the ways they have disappointed you over the past year.
Kramer: And is there a tree?
Frank: No. Instead, there's a pole. Requires no decoration. I find tinsel distracting.
Kramer: Frank, this new holiday of yours is scratching me right where I itch.

Frank: George, you're forgetting how much Festivus has meant to us all. I brought one of the cassette tapes. (Franks pushes play, George as a child celebrating Festivus is heard.)
Frank: Read that poem.
George: (Complaining) I can't read it. I need my glasses!
Frank: You don't need glasses, you're just weak! You're weak!
Estelle: Leave him alone!
Frank: Alright, George. It's time for the feats of strength.
(George has a break down)
George: No! No! Turn it off! No feats of strength! (Gets up and starts running out of the coffee shop) I hate Festivus!
Frank: We had some good times.

Festivus was originally celebrated by the family of Dan O'Keefe, the writer credited for including Festivus in the Seinfeld episode.

Near the beginning of the episode, when Jerry meets Gwen, he introduced himself as, "Hi. I'm Jerry. You might not know it to look at me, but I can run really, really fast." This was likely a reference to the Season 6 episode "The Race" (S06E10).

At the Costanzas', Mr. Kruger recognized Kramer as Dr. Van Nostrand. This was a reference to the earlier season 9 episode "The Slicer" (S09E07), when Kramer, who was dressed in his butcher's smock, posed as a dermatologist doing a skin cancer screening.

"The Strike" marked Bryan Cranston's final appearance as Tim Whatley on Seinfeld. After Seinfeld, he went on to even bigger and better roles.

Around the time "The Strike" aired, it was announced that this would be the final season of Seinfeld.

Tracy Letts, who played "Counterguy" at the Off-Track Betting location, successfully went on to a career as a playwright, eventually receiving the 2008 Pulitzer Prize for Drama for his play August: Osage County. He also received a Tony Award as an actor, for his portrayal of George in the revival of "Who's Afraid of Virginia Woolf?"

H&H Bagels is the name of a real bagel shop in New York City. The company is world famous for its bagels, and the Seinfeld writers regularly consumed their product.

In the DVD commentary feature, during the scene where George receives a Festivus card from his father, Dan O'Keefe mentioned that he actually used to receive Festivus cards from his own father.

In the scene where Frank tells Kramer about the fight for the doll, the final two lines, "That must have been some kind of doll" and "she was", were totally ad-libbed by the actors.

According to Jerry Stiller, when they were preparing for the scene where his character enters the diner with the aluminum pole, Michael Richards advised him to drag the pole along the ground. The idea was to make the hollow dragging sound, which Michael thought would make it even more hilarious.

The idea of the "Two-Face" nickname given to the character Gwen was introduced to the episode by writer Dan O'Keefe. It was based on a woman he had met in college who often exhibited similar characteristics. O'Keefe also said that the situation always reminded him of the Batman character Harvey Dent, who was also nicknamed "Two-Face".

When Jerry Seinfeld and Karen Fineman (Gwen) were shooting the scene where they were in the dark tunnel, the makeup crew put a prosthetic in Karen's mouth to puff her upper lip and tissues in her nose to flare her nostrils.

Originally, instead of using makeup gimmicks, another actress (Suzanne Krull) was cast to play "Different Gwen". It was eventually decided that using an entirely different person for the less attractive version of the character would be too confusing for the audience.

Incidentally, Gwen was Jerry's 69th successive girlfriend in the series.

When Jerry says, "It has a certain understated stupidity" George claims he is quoting The Outlaw Josey Wales. Smart movie buffs will tell you that George was wrong, and the line isn't actually in the movie.

When "Denim Vest" (Kevin McDonald) looked across the street to try to find a fake number to give Elaine, he spotted a truck labeled with the name "Azzari Brothers". This was named after Seinfeld set designer Tom Azzari, who is also the man shown standing in front of the truck.

Jerry stated that Gwen "looks good when sitting in the back booth" at the coffee shop, and that he'll try to always sit there with her. However, on the two subsequent occasions that they ate there, they just sat in the booth that is directly behind the cash register, and not actually in the back booth.

Elaine is a rule breaker! Who knew? When she is at the Off Track Betting location, there is a sign on the window that states, "No verbal bets. Cash must accompany betting slip." However, she places a verbal bet for a race at Belmont, without any paperwork.

When Elaine looks down at Kramer's business card from 10 years ago, the card says "Cosmo Kramer Bagel Technician". If the card was printed 10 years earlier, why would it have his first name? Kramer never used his first name and kept it secret from everyone until more recently in the series.

When Kramer returned to work at H&H Bagels, he claimed he had never seen a raisin bagel before. However, previously in the 8th season episode "The Muffin Tops", he served pizza bagels made from cinnamon raisin bagels to the patrons of his "Peterman Reality Bus Tour".

Since Mr. Kruger had already acknowledged Kramer as "Dr. Van Nostrand", why wasn't he suspicious when Frank Costanza referred to Kramer as "Mr. Kramer"?

Earlier in the episode, Frank had expressed derision for tinsel. However, at the dinner, as he is introducing Mr. Kruger to the aluminum pole, a garland of tinsel was clearly visible on the wall in the background.

In the scene where Kramer brings day-old bagels to Jerry's apartment, George was holding a bagel when he prepared to leave. When he reached the door he turned and pointed, and was no longer holding the bagel.