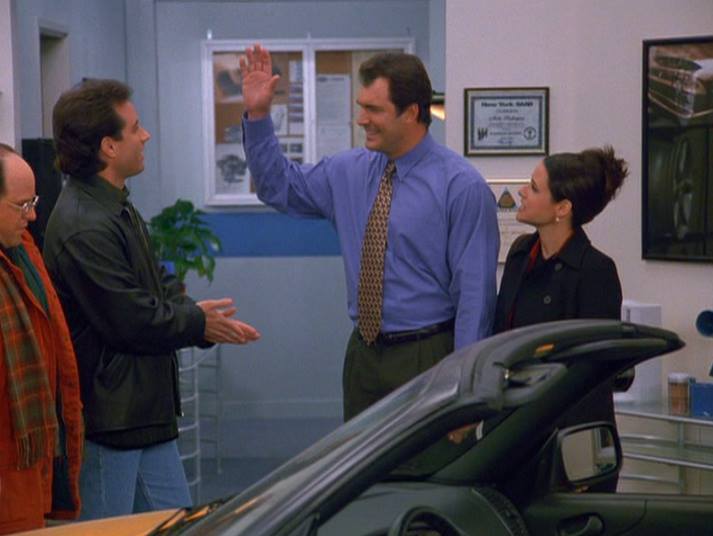 Elaine's relationship problems with David Puddy could influence Jerry's ability to get an insider deal on a new car. While waiting for Jerry, George has a series of misadventures trying to get a snack. Meanwhile, Kramer takes a test drive, and attempts to see just how far the car can run with the gas gauge on empty.

George: (about car salesmen) First they stick you with the undercoating, rust-proofing, dealer prep... Suddenly you're on your back like a turtle.

Jerry: Alright, alright. Alright, that's enough! Let's get back to my deal. That undercoating, that's just a rip-off, isn't it, David?
Puddy: Oh, we don't even know what it is.

(Puddy is adding up all the extra charges)
Puddy: Keys.
Jerry: Keys?
Puddy: How you gonna start it?

George: Twix is the only candy with the cookie crunch!
Clerk: What about the 100,000 dollar bar?
George: Nope, rice and caramel.
Clerk: Nougat?

Jerry: Slapping hands is the lowest form of male primate ritual.
Elaine: It's that bad?
Jerry: What do you think the Nazis were doing? That was the "heil five."

Salesman: So where are we going?
Kramer: Just a little place I like to call... you'll see.

(Jerry is trying to finalize the deal for his new car with Puddy just after Puddy and Elaine break up again)
Jerry: Did you two break up?
Puddy: That chick's whacked, we're history. I just left out a couple of things. Rust-proofing...
Jerry: Rust-proofing?
Puddy: Transport charge, storage surcharge, additional overcharge, finder's fee...
Jerry: Finder's fee!? It was on the lot!
Puddy: Yeah, that's right. Floor mats, keys...
Jerry: Keys!?
Puddy: How ya gonna start it?

Elaine: You're a salesman now - and the high-five is... it's very grease monkey.
Puddy: What did I tell you about that?
Elaine: I'm sorry, but the high-five is just so stupid.
Puddy: (Somewhat hurt) Oh yeah? I'll tell you what's stupid. You. Stupid.
Elaine: Well, that is really mature.
Puddy: Yeah? So are you.
Elaine: Huh?
Puddy: You're the grease monkey.
Elaine: (Confused at his attempts at a comeback) Uh.. that doesn't make any sense. I am leaving.
Puddy: Yeah, if you leave, we're through.
Elaine: Fine! We're through!
Puddy: Oh, so you're leaving?
Elaine: (While leaving) That's right. (Mocking Puddy, she puts her hand up) High-five!(Turns around, putting her hand behind her back like he had done) On the flip side!(As Elaine is leaving, she mutters to herself) Takin' me to Arby's.

Jerry: So Puddy, this is a pretty good move for you, huh? No more 'grease monkey.'
Puddy: I don't care for that term.
Jerry: Oh sorry, I didn't know.
Puddy: I don't know too many monkeys that can take apart a fuel injector.

George: I think I've reached a point in my life where I can tell the difference between nougat and cookie.

Salesman: Let's just go for it like "Thelma and Louise"!
Kramer: They drove to a dealership?
Salesman: No, they drove off a cliff!
Kramer: You're one sick momma... I like it!

Puddy: I can't give you black at that price.

George: I have the window!

George: It's wrinkled, it's worthless.

When Jerry frantically calls Elaine to tell her to get back together with Puddy, she replies, "Who is this?" This is very similar to multiple phone calls in earlier episodes, only George is usually the frantic one and Jerry cool and sarcastic.

The dealership's owner's father can be heard over the Castle Rock logo repeating his line "A nickel!"

As Jerry is talking to Elaine on the phone, look in the background. You can see Puddy at his desk just sitting motionless and staring off into space.

A rare episode in which Jerry's apartment isn't seen. \

After his candy line-up is ruined, George screams "Twix" to the sky, a reference to James Kirk screaming "Khan" in "Star Trek II: The Wrath of Khan". George previously imitated this scene in the season 8 premiere, "The Foundation".

At the end, Kramer and the salesman look at each other, hold hands, and Kramer steps on the gas pedal. This is a reference to the 1991 film "Thelma & Louise".

George does a "candy line-up" with 10 unwrapped candy bars, but never had either the change or the dollar bills to buy any of them.