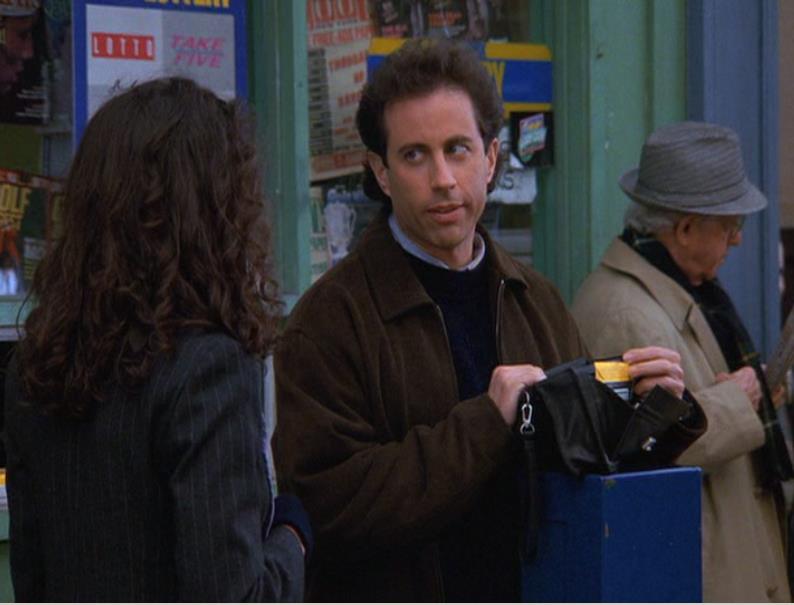 I can never find anything in here.

Puddy is wearing what can only be described as a "man fur." Jerry and Elaine leave it to George to sniff them out a deal on a massage chair, for an apartment warming gift for their friend Joe Mayo. Elaine doesn't like Joe's parties, because he always gives his guests an assignment. Kramer and Newman are going to reverse the peepholes on their doors. The landlord wants to evict Newman, because he is an agitator. Jerry decides to go wallet-less. George is opposed to the idea; he keeps everything in his wallet. Jerry, George, Elaine and "man furred" Puddy go to the party and get their assignments. Elaine, who is in charge of the coats, decides to throw "Dr. Zaius" (Puddy's coat) out the window. Kramer comes to Newman's defense with the landlord. Joe Mayo has the same kind of coat that Puddy had, so he wants Elaine to replace the coat, after all she was in charge. George complains about back problems that Jerry attributes to the size of his wallet. The massage chair gets delivered to George's apartment. Wallet-less Jerry must carry all his girlfriend's stuff, when they go out on their date. Newman admits to Kramer that he is sleeping with the landlord's wife. Kramer and Newman find Puddy's coat hanging in a tree. Jerry complains about carrying all his girlfriend's stuff and Elaine tells him about Peterman's small men's carryall. "It's not a purse, it's European." Elaine decides she is out of the gift, if she has to replace the coat. George is enjoying the new chair and lies about getting the chair. Elaine finds out that Newman has Puddy's coat and she invites Newman to her apartment. Despite Elaine's come-ons, Newman won't give up the coat, he has given it to the landlord's wife. The landlord confronts Kramer, when he discovers the fur coat. Kramer says that it belongs to Jerry, because he is one of those insecure entertainers. Kramer convinces Jerry to wear the coat in front of the landlord. George continues to lie about the receiving the gift. Jerry drops out of the gift, when he finds out that Joe Mayo didn't like the music he provided at last year's party. Kramer was never in the gift, he just thought it was a good idea for a gift, he doesn't even know Joe Mayo. George will be able to return the chair, after he has the receipt in his wallet. Out on the street, George's wallet explodes. Jerry goes out on the street in the fur coat, where his "purse" is stolen and the landlord finds out the truth about the coat. Puddy gets a new coat.

Jerry: I can't believe we're going dancing.
Keri: You don't go that often?
Jerry: No, because it's so stupid.

(On the phone with George, Jerry can hear the massage chair in the background)
Jerry: What is that noise?
George: That's my toaster. I gotta go. Ohhhhhhhhhhhhh!
(Jerry hangs up the phone)
Jerry: You know, sometimes I get the feeling George isn't being completely honest with me.

George: Oh, so now I have to buy the whole chair by myself?
Jerry: No, you don't have to buy anything.
George: I already bought it! I've been lying to you for three days and now you're all screwin' me!
Jerry: I don't understand. Why didn't you tell us you had it?
George: I needed it. My back is...a little tweaked.
Jerry: Because of your giant wallet. Just get rid of it.
George: Never! It is a part of me. I will just return the chair, and it will be easy, because the receipt is in my good friend.
Jerry: Your good friend is morbidly obese.

George: (taking out his wallet) Well, I'm satisfied. Uh...my back is...killing me.
Jerry: Of course. Because of that wallet. You-you got a filing cabinet under half of your ass.
George: (putting his wallet back in his pocket) This...is an organizer, a secretary, and a friend.

Kramer: Newman and I are reversing the peepholes on our door. So you can see in.
Elaine: Why?
Newman: To prevent an ambush.
Kramer: Yeah, so now I can peek to see if anyone is waiting to jack me with a sock full of pennies.

Jerry: It's not a purse. It's European!

(Puddy approaches Elaine wearing a cheap (probably vinyl) sports coat)
Elaine: What is that?
Puddy: It's my new coat.
Elaine: What happened to the fur?
Puddy: Oh, I saw Jerry wearing a fur coat and he looked like kind of a dandy. Hey, check it out (turns around revealing a large 8-Ball on the back) 8-Ball! You gotta question...you ask the 8-ball.
Elaine: Are you gonna wear that, all the time?
Puddy: ALL SIGNS POINT TO YES...hahaha high five!

Elaine: So now Joe Mayo wants me to buy him a new coat.
Jerry: Because you threw it out.
Elaine: No, because I was in charge of the coats. It's insane!
Jerry: But you did actually throw his coat out the window?
Elaine: But he doesn't know that. As far as he knows someone stole it, and that's the person who should be held responsible.
Jerry: But that's you.
Elaine: So I guess I'll have to buy him a new coat, even though I don't think I should be held responsible, which I am anyway.

Silvio: Why are we in Jerry's apartment?
Kramer: Well, I like to think of this as my conference room. It has a more formal atmosphere, you know, with the shelves... and the furniture.

(After seeing his girlfriend's large keychain)
Jerry: What are you a medieval dungeon master?

Jerry: Hi, I'm Jerry. How do you like my pants?

Kramer: (to Elaine after he and Newman found Puddy's fur coat in a tree) Have you ever seen Newman climb? He's like a red tailed lemur.

Kramer: Nobody carries a wallet anymore. All you need is a few cards and your money. You put the big bills on the outside.
Jerry: That's a five.

Jerry: Hey Silvio. Just out for a little stroll in my favorite fur coat.
Silvio: That is your coat?
Jerry: It sure is.
Silvio: Kramer says you need it because you're an entertainer and you're desperate for attention.
Jerry: That's true.
Kramer: Hey Silvio, look at Jerry here, prancing around in his coat with his purse. Yup, he's a dandy. He's a real fancy boy!

Jerry: (to George) You know, just the fact that you're so dead set against this makes me think I'm on to something.

George: I'll sniff out a deal. I have a sixth sense.
Jerry: Cheapness is not a sense.

Jerry: So Puddy wears a man-fur?
Elaine: He was struttin' around the coffee shop like Stein Erickson.

Jerry: (comparing George's wallet with his hamburger) You got more cow here than here.

Newman: (Regarding Elaine's apartment) Ah, this is very much as I imagined it to be, aside from this rattan piece which seems oddly out of place.

In the original broadcast, Jerry asked George why he has Irish money in his wallet. However, in syndication, Jerry instead wonders why George has a free coupon from an Exxon.

Joe Mayo is actually the name of one of the crew members, which makes it even funnier when Kramer says "it sounds made up".

When Elaine calls Puddy "Stein Erickson" she is making a reference the former alpine ski racer who won a gold medal at the 1952 Olympics in the Giant Slalom.

When Elaine calls Puddy "Dr. Zaius" she is making a reference to the simian scientist from the Planet of the Apes movies.

When we're shown the inside of Kramer's apartment via the peephole, we see what looks like a living room immediately in front of the door. However, whenever Kramer has opened his door there is always a wall immediately behind the door.