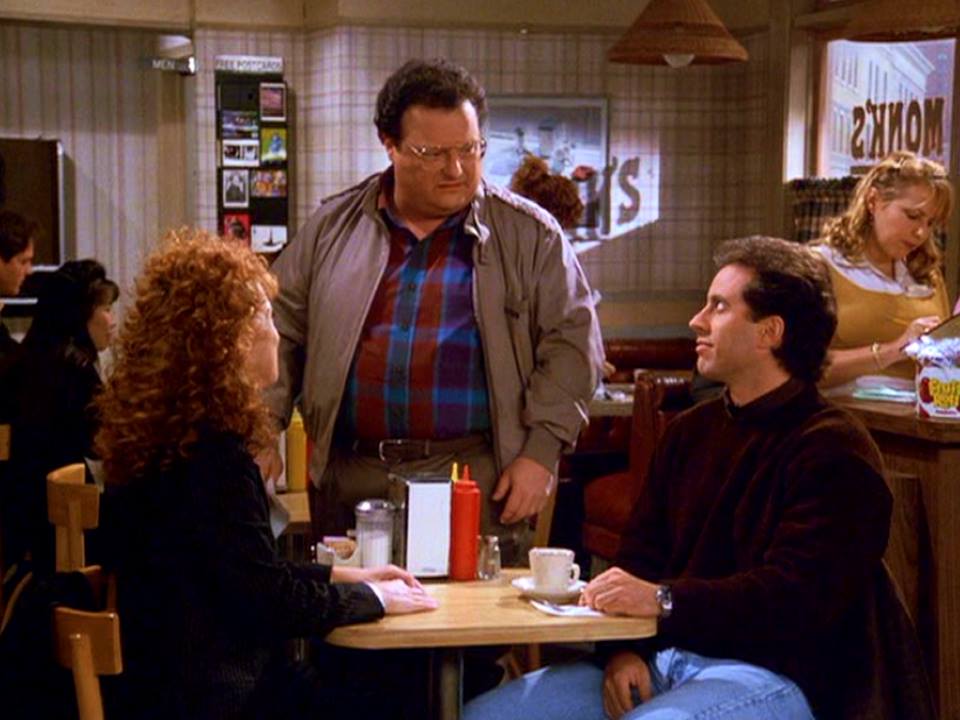 It's so great to see a show that's about something.

Elaine is obsessed with a cartoon in the New Yorker and is determined to prove that it doesn't make sense. George finds himself in "weird trouble" when he realizes that his latest girlfriend looks very similar to Jerry. Jerry's comments about how bad of an actress someone is causes him to be the subject of her entire one-woman show. Meanwhile, when Kramer says more than he should too many times, he decides never to speak again.

Elaine: He said I could submit some of my own cartoons.
Jerry: Wow, that's incredible. But you don't draw.
Elaine: I do too.
Jerry: What, your sad little horsies? The house with the little curl of smoke? The sunflower with the smiley face. The transparent cube.
Elaine: It's better than your drawings of naked Lois Lane.
Jerry: Where did you see that? Those are private!

Sally: (seeing the silent Kramer at the coffee shop) Hey, you're Jerry's friend. You're kooky. Mind if I sit? My show is going really well. Have you seen it yet? You should, everybody else has. And you know what? I got recognized the other day! How weird is that? I know, at first I liked the attention, but it's like, 'Whoa, take three steps back, get a life, OK?' But then there wouldn't be a Sally Weaver without the fans, know what I mean? But who am I, anyway? I mean, there's Sally Weaver the woman, Sally Weaver the artist, Sally Weaver the person--
Kramer: (abruptly) Now, you got to shut up!

Jerry: (to Susan's friend Sally, in an effort to fill an awkward pause) So, Susan's dead.

Kramer: (to Jerry) You know what woman I always thought you looked like? Lena Horne.

Janet: I like gum.
George: I do too. You see, that's what we're about. You don't remind me of anyone and we love gum.

Elaine: (Reading what Kramer wrote for the comic) The pig says: "My wife is a slut"?
Jerry: Now that's a complaint.

George: Maybe it's got something to do with that 42 in the corner.
Elaine: That's the page number.
George: Well, I can't crack this one.

Elaine: I'm gonna get to the bottom of this!
Jerry: I think we're at the bottom!

Elaine: Everything with you has to be so jokey.
Jerry: I'm a comedian.

Kramer: C'mon George, relax. Just because they look alike that doesn't mean you're secretly in love with Jerry.

Elaine: Some people should just give up. I have.
Jerry: What did you want to be?
Elaine: I don't remember, but it certainly wasn't this.

Newman: (reffering to Sallys show) It's so great to see a show that's about something.

Kramer: (to Jerry) Hey, you got some messages. Yeah, uh... George, George, Elaine, George again, Elaine... Newman, but that was a crank call.

(Seeing Sally on TV in his apartment)
Jerry: Get outta my house!!

Jerry: You ripped off a Ziggy?
Elaine: It must've seeped into my subconscious. Puddy has Ziggy bedsheets.

(Kramer insists he is going to stop talking)
Kramer: Starting NOW! (Suddenly stubs his toe, he cries out in pain then looks at Jerry) ...now!!!

Kramer: What do I need to talk for, huh? What, to blab to the neighbors about how George has a new femme Jerry friend? To tell everybody at the coffee shop how George is all mixed up in a perverse sexual amalgam of some girl and his best friend? See now, I've done all that. Now it's time for silence.
George: Silence, yes!

Kramer takes only 16 seconds to shave off his moustache.

When Newman says that it's nice to see a show about something, the character is referring to the "Seinfeld" show, in the sense that it is often referred to as "the show about nothing".

The Sally Weaver storyline in this episode was inspired after Kathy Griffin ridiculed Jerry Seinfeld during her HBO stand-up special, alleging that he was rude to her during her appearance in the episode "The Doll".

In "The Doll", Sally is said to be a "big executive for Federal Express". When did she become a struggling comic?