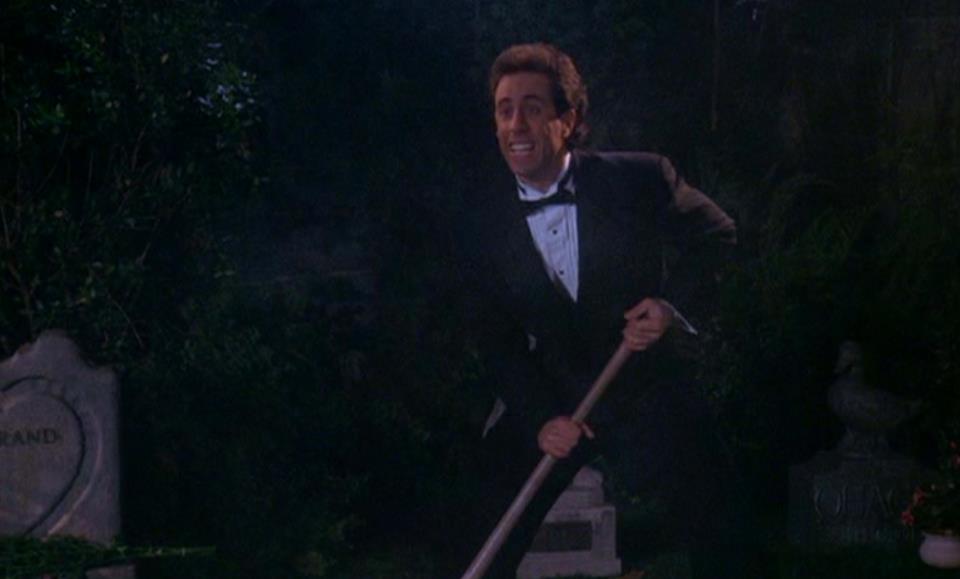 Due to recent robberies in the building, Jerry refuses to let a stranger in the front door, but things get awkward when he learns that the man is his neighbour. Kramer buys a strongbox in order to safeguard his valuables, but Jerry can't help but keep finding the keys. Elaine starts dating a mysterious man who she suspects is either married or a superhero. Meanwhile, despite his numerous attempts, George's current girlfriend refuses to let him break up with her.

George: Why does it seem like I'm the only one working at this breakup?!

George: (about his girlfriend Maura) She's like a district attorney. If it's not the truth I'll break under the cross.

Jerry: You were in the Army?
Kramer: Briefly.
Kramer: Oh. Well, would you look at that? Guess I forgot to lock it.
Jerry: You mean it was open? We desecrated a pet cemetery for nothing?
Kramer: Well, this is one for the books.

Kramer: (to Jerry) You wouldn't last a day in the army!
Jerry: Well how long did you last?
Kramer: Well, that's classified.

Maura: A relationship is like launching nuclear missiles from a submarine, you both have to turn your key.
George: Turn your key Maura!
Maura: I'm afraid I can't do that.
George: TURN YOUR KEY!
Maura: No.
George: (giving up) ...alright...

Kramer: (reading a tombstone) Man's best friend. (just talking) Jerry, I want something like that on my tombstone.

George: (having trouble ending a relationship) Apparently I was unable to break up beyond a reasonable doubt.

Jerry: (To George) So you're in a relationship with a woman you don't like and you're having an affair with a woman that won't have sex with you.

George: I am caught in my own web of lies.

Jerry: (about Elaine's new boyfriend) Is he wretchedly poor? Does he wear one of those barrels with the straps?

George: I think that ginger ale at the coffee shop is just Coke and Sprite mixed together.

Jerry: Kramer, they think I killed Fredo! And who buries a bird?
Kramer: Yeah. Just give it to the Portuguese guy, and he... puts it in the incinerator.
Jerry: Just get the key and let's get out here.
Kramer: You know, it's a funny thing about that bird dying. I hid the key in Fredo's food dish. Whew! That's a weird coincidence.
Jerry: Kramer!?
Kramer: What?
Jerry: You killed Fredo!
Kramer: Fredo was weak and stupid. He shouldn't have eaten that key.
Jerry: Kramer, I need those cufflinks, but now they're in the box, and the key is in the bird. What are we gonna do?
Kramer: You just answered your own question.
Jerry: Oh, no...
Kramer: (walking towards his apartment) I'll get the shovel.

Jerry: We found out his super power was lack of money.
Elaine: Alright.
Jerry: He's invulnerable to creditors.

(Jerry getting into his building elevator from the lobby, and seeing Phil get in with him.)
Jerry: So you do live here.
Phil: Yeah.
(going up in the elevator, both men awkwardly stand in silence. Jerry, getting off the elevator at the same floor as Phil.)
Jerry: You live on this floor?
Phil: Yeah.
(Jerry, seeing Phil start to open his apartment door, only one door down from Kramer's)
Jerry: So you live right... there.
Phil: Yeah.
Jerry: So I guess I'll see-
(Phil goes into his apartment as he slams the door behind him)

George: You can already start up a conversation with Jerry Lewis-you guys have the same first name.
Jerry: That won't work...
George: That's not what I said when I met George Peppard last week.
Jerry: George Peppard has been dead for years.
George: Well whoever I was talking to sure knew a lot about The A-Team!!!

Glenn: You are the bearclaw in the garbage bag of my life.

Kramer mentions that one of the items he plans to store in the strongbox is his Tony award. This is a reference to the episode "The Summer of George", where Kramer was mistakenly awarded a Tony.

At the end of the episode during the Castle Rock logo Kramer can be heard to say "Really one for the books."

This is the second of only two episodes in which Jerry can be seen using the computer in his apartment. The first was the season five episode, "The Stall".

When Kramer says, "Fredo was weak and stupid" he is making a reference to the 1972 film "The Godfather." Fredo was the dumbest of the Corleone brothers. His famous line was, "I'm smart, I can do things."

When Phil angrily shuts his door, we see that his apartment number is 5E. However, 5E is Newman's apartment.

When Kramer bursts into Jerry's apartment to escape the bird, the door slams shut by itself.