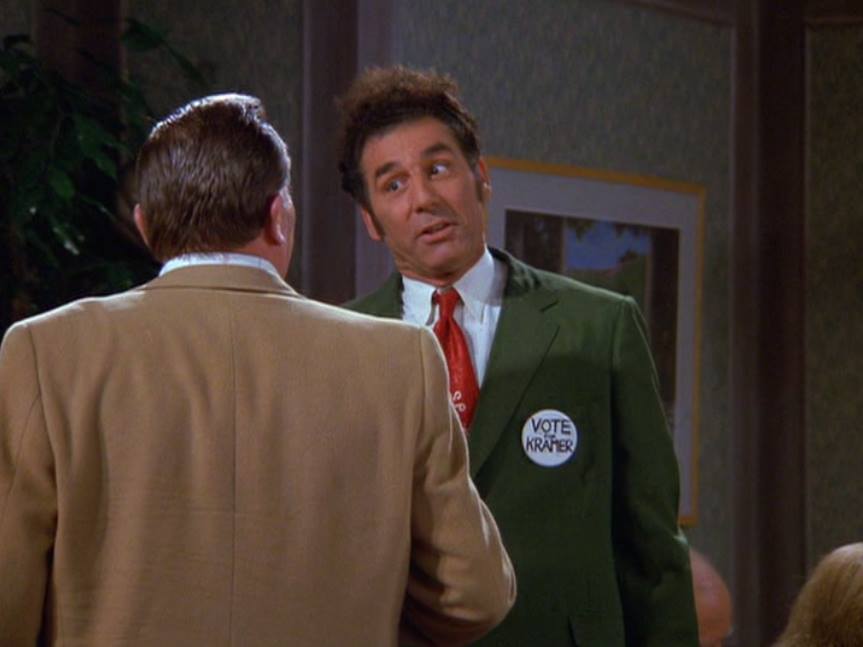 Jerry gives his father an electronic organizer for his birthday. Jerry and George debate about the race of Elaine's new boyfriend which triggers her curiosity. Kramer plans on running for president of Morty and Helen's condo association. George lies to the Rosses about owning a house in the Hamptons.

Helen: I'll fix ya something. How about feta cheese omelet?
Kramer: Mmmm, that sounds great, Mom.
Jerry: You feed him, he'll never leave!
Helen: I don't have any feta. How about cottage cheese and egg beaters?
Kramer: (pouts) I guess...

Jerry: (about retirement homes) Kramer, you can't live here. This is where people come to die! (his parents look at him)

(George is preparing to drive the Rosses to the Hamptons)
George: Ya wanna get nuts? LET'S GET NUTS!!!

Kramer: Polls close in an hour; I think we got this baby all sewn up. (fishes a wizard out of his pocket) There was one extra. (shakes head) Norman Bergerman...he won't be leaving any tips where he is.

Elaine: (to Darryl) You're black. You said we were an interracial couple.
Darryl: We are. Because you're Hispanic.
Elaine: I am?
Darryl: Aren't you?
Elaine: No. Why would you think that?
Darryl: Your name's Benes, your hair, and you kept taking me to those Spanish restaurants.
Elaine: That's because I thought you were black.

George: And I have horses too.
Mr. Ross: What are their names?
George: Snoopy and Prickly Pete.

Elaine: So Kramer's running for president of the condo?
Jerry: Yeah, it's all my father's doing. He wants to install Kramer in a puppet regime and then wield power from behind the scenes.
Elaine: Who are they running against?
Jerry: Common sense and a guy in a wheelchair.

Kramer: Boys, I'm retiring.
Jerry: From what?
Kramer: From the grind. I mean, who needs it? I've accomplished everything I've set out to do.

George: I've been lying about my income for a few years. I figure I can afford a fake house in the Hamptons.

George: I'm calling up the Rosses and inviting them out to my non-existent place in the Hamptons. Then we'll see who blinks first.
Elaine: Haven't you done enough to these people?

Morty: How could you spend 200 dollars on a tip calculator!?!
Jerry: It does other things!

A deleted scene from the Season 9 DVD set features a brief appearance of Bob Saccamano Senior.

When Morty protests that he resigned as condo president instead of being impeached, he is making a reference to Richard Nixon, who resigned from Presidency of the United States before he could be impeached.

When George says, 'Ya wanna get nuts? Let's get nuts!", he is making an homage to the scene from the 1989 film "Batman" where Batman (Michael Keaton) confronts the Joker (Jack Nicholson).

The Boca Breeze also reports on Larry David's hole in one, hurting his elbow and his never playing golf again.

When Elaine is talking to George and Jerry about Darryl possibly being black, her purse switches from being on her shoulder to not being visible at all.

When Kramer is greeting people on his campaign trail, it's obvious there is a doll, not a real baby in the baby carriage pushed by the mom.

If you watch Mr. Ross closely at Monks after Elaine leaves you can clearly see him having his hands behind his back one second and the next shot shows him immediately having his hands in his pockets.