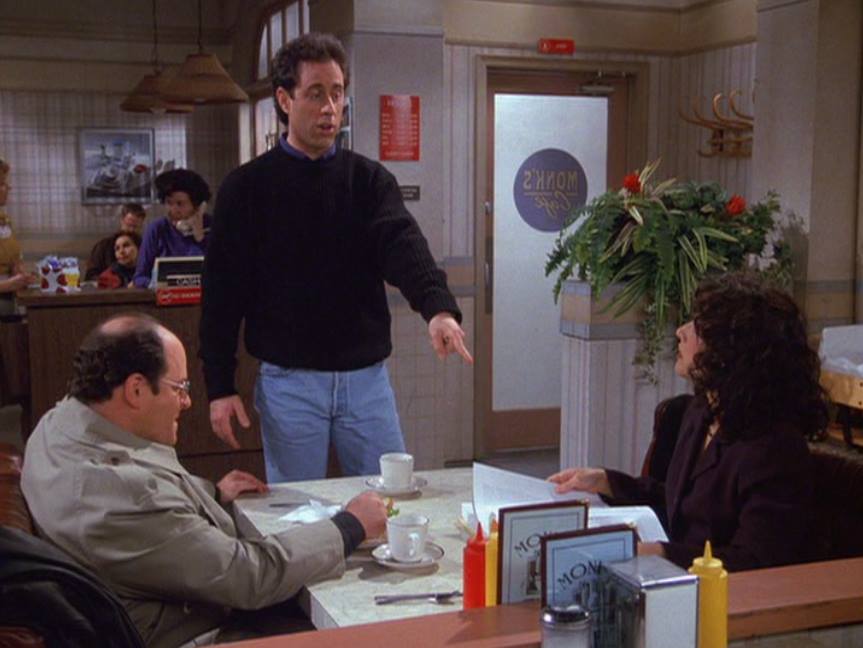 That book has been on a wild ride.

Jerry is disturbed when spots Uncle Leo shoplifting. George takes a book into a bookstore's bathroom, and is outraged when they force him to buy it. Kramer and Newman plan to bring rickshaws to New York. Meanwhile, Elaine embarrasses herself again at the annual Peterman party - this time by making out with a stranger.

Elaine: (after helping a co-worker through withdrawals) I even got an idea out of it... The Detox Poncho.

George: I can't return the book. It's been flagged in every Brentano's in town. So instead I'm going to steal it, return it, get my money back, and then everything will be even.
Jerry: You defile one book, steal another, get your money back, and that seems even to you?

Co-Worker: So Elaine, you gonna dance this year?
Elaine: Maybe....all over your face!

George: They made me buy it! A hundred bucks this thing cost me!

Jerry: Leo, I saw you at Brentano's yesterday.
Uncle Leo: Why didn't you say hello?
Jerry: Because you were too busy stealing a book!
Uncle Leo: You still say hello.

Helen: It's not stealing if it's something you need.
Jerry : (confused) What does that mean?
Helen: Nobody pays for everything.
Jerry: (shocked) You're stealing too?!

Peterman: Elaine, who among us hasn't snuck into the break room to nibble on a love Newton?
Elaine: (confused) Love Newton?

Jerry: (about the book George took into the bathroom) That book has been on a wild ride.

George: If it wasn't for the toilet, there would be no books.

Kramer: (doing a Jerry impression) What's the deal with politics? I don't get it. Am I right, people?

Charity Worker: This book has been in a bathroom!
George: What are you talking about?
Charity Worker: It's been flagged. I know, I used to work in a Brentano's. Mister, we're trying to help the homeless here; it's bad enough we've got some guy out there trying to strap a rickshaw to 'em!

George: Well you just lost a lot of business because I love to read!

Jerry: You could get arrested.
Uncle Leo: Arrested? Come on! "I'm an old man. I'm confused! I thought I paid for it. What's my name? Will you take me home?"

Jerry: (to Kramer and Newman) To the Idiotmobile!

Kramer: Well, the rickshaw's gone. We strapped it to a homeless guy and he phhhffew! He bolted.
Jerry: Well, you know, 85% of all homeless rickshaw businesses fall within the first three months.
Kramer (to Newman): See, we should've gotten some collateral from him...like his bag of cans, or...his other bag of cans...

Elaine: We made out at the table like our plane was going down.

Jerry: (pointing the finger at George for shoplifting) That Guy! Swarm! Swarm!

(In Jerry's bedroom)
Jerry: I want everyone out!
Kramer: All right. (to Newman) We'll talk in Jerry's kitchen. I'll make some cocoa.

Kramer: Look at this, Hong Kong's outlawed the rickshaw. You know, I always thought those would be perfect for the city.
Jerry: Yeah, New York needs more slow-moving wicker vehicles.

This episode marks the second appearance of the character "Rebecca DeMornay", the worker at the homeless shelter. In this episode, she refuses to take George's book that was flagged for being in the bathroom. She also appeared in "The Muffin Tops" and was upset with Elaine for donating only the muffin stumps to the homeless.

When Kramer says, "I once met a horse named Rusty', he is referring to the flatulent horse that pulled the carriage in the episode "The Rye".

This is the only episode in which we see one of Jerry's bicycles get any use -- Kramer rides it around Jerry's apartment in the opening scenes.

The music playing when Peterman wows the crowd with his dancing is the exact same song to which Elaine danced in "The Little Kicks", "Shining Star" by Earth, Wind and Fire.

When Newman careens down the hill in the rickshaw, he's actually rolling down Bunker Hill in downtown Los Angeles. You can see the One Wilshire building in the background for a few frames, after he collides with Zach. Also, a white Los Angeles taxi is seen in the background.

When Jerry had that dream of Leo in jail, it is a reference to "Cape Fear", including the same music played in the background.

In one of the opening scenes that feature Kramer doing a series of random things in Jerry's apartment, Kramer has attached a hose to the kitchen sink and is apparently putting out a fire in one of the back rooms. As he pulls on the hose, the sink and counter are clearly moving.

As Zach is being run over by the rickshaw, production company trucks, traffic cones and set police are visible in background.

It looks like the same beer stein we saw in Elaine's apartment (when she is on the phone with Jerry) is also beside the bookstore's cash register.