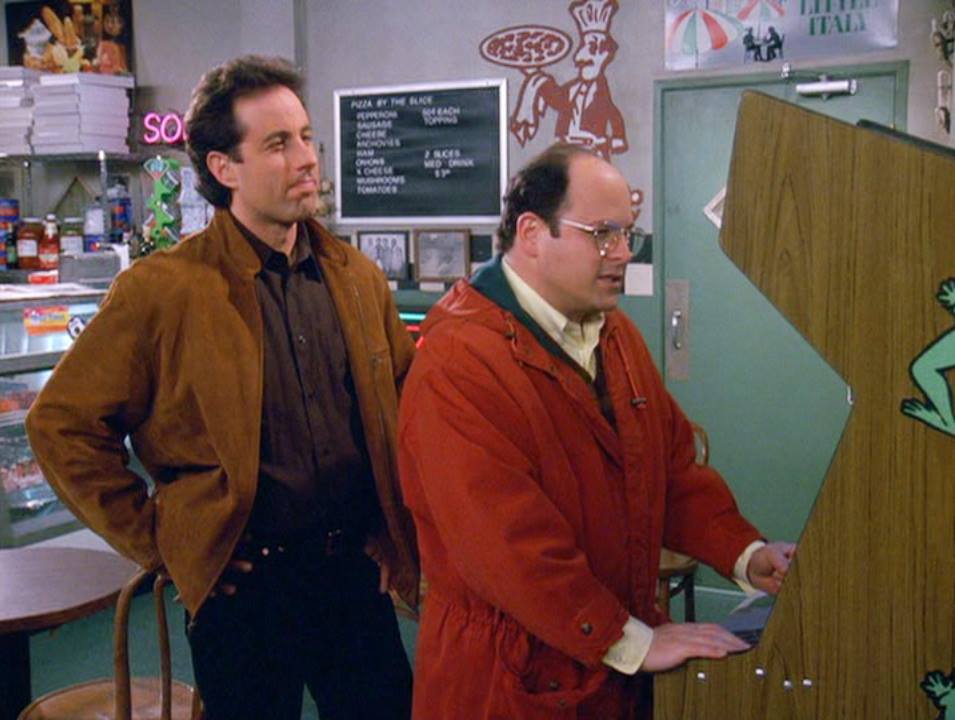 The perfect combination of Mountain Dew and mozzarella... just the right amount of grease on the joystick.

George discovers that he still has the high score on the Frogger machine in a pizza place he and Jerry used to go to in high school. Jerry goes out with a friend of Elaine's, but when he wants to break up with her, news of a serial killer in the area makes him reconsider. Meanwhile, Elaine is overwhelmed by how frequently there is an occasion to eat cake at work. When she finally refuses to partake, she ends up eating something that she shouldn't, for a variety of reasons.

Elaine: (about her co-workers) I had to take a sick day, I'm so sick of these people.

Jerry: I think by sleeping with her I may have sent her the wrong message.

Jerry: You sure do have a lot of friends, how come I never see any of these people?
Kramer: They want to know why they never see you.

Elaine: Mr. Peterman, you wanted to see me, Sir?
Mr. Peterman: Elaine, up until a moment ago, I was convinced that I was on the receiving end of one of the oldest baker's grifts in the book: the Entenmanns's Shim Sham.

(Shlomo and Slippery Pete are watching George cross the street like the frog in the game)
Shlomo: He looks like a frog.
Slippery Pete: So do you.

Jerry: (receiving an ugly new hat) Why don't you put it in the car so I don't accidentally toss it in that dumpster.

Elaine: Do you think we can fill the void in our lives with flour, sugar, eggs and vanilla? I mean, we're all unhappy; do we have to be fat too? (looks at Becky who is fat and is standing in the crowd) Not you Becky, I know you have a slow metabolism.

George: Kramer, listen to me. I'm never going to have a child. If I lose this Frogger high score, that's it for me.
Kramer: Believe me George; you can count on Slippery Pete.
George: Slippery Pete?
Kramer: Yeah, I don't care for the name either.

Lubeck: It's an Entenmann's.
Peterman: (with vain hope) Do they have a castle at Windsor?
Lubeck: No, they have a display case at the end of the aisle.

(Frogger gets hit by truck)
Jerry: Game over.

Jerry: Hey George, how are you going to keep the machine plugged in?
George: What?
Jerry: Well, when you unplug the machine, all the scores will be erased.
George: You're right. Why must there always be a problem. You'd think just once I'd catch a break. God knows I earned it with that score.

George: Hey, Jerry, remember Frogger? I used to be so into this game. Getting that frog across the street was my entire life.
Jerry: Yeah, and then you went on to... well, it's a good game.

George: (on his gaming skills) Oh, I was unstoppable! Perfect combination of Mountain Dew and mozzarella, with just the right amount of grease on the joystick.

Elaine: Guess what I ate!
George: An ostrich burger?
Elaine: No, a $29,000 piece of cake. Peterman got it at the Duke and Duchess of Windsor auction. It's the most romantic thing I've ever eaten.
Jerry: How did it taste?
Elaine: A little stale.

Jerry: She's a sentence finisher. It's like dating Mad Libs.

Peterman: Elaine, can you keep a secret?
Elaine: No sir, I can't.

Kramer: Jerry. The police found another victim of the Lopper in Riverside Park... I saw the photo, and it looked a lot like you!
Jerry: Oh, come on, there's a lot of people walking around the city that look like me!
Kramer: Not as many as there used to be!

A large truck bears down on George while he's pushing the Frogger machine. Although the drivers hands never leave the steering wheel, we hear the truck's horn sounding repeatedly.

When Elaine is talking to Jerry about her missing her 4 o'clock sugar rush, the telephone cord switches from being under her arm to over.

When Jerry and George walk into the pizza place you can see the stores across the street when the door is open. A second later the sings change into a different image, shown backwards.

When Jerry and George are watching the kid playing Frogger in Mario's, they cut to the game screen. . . where you can clearly see that the high score matches the current score of the kid playing: 7200. Later, when they show the list of high scores, George's score of 860,000 is shown.