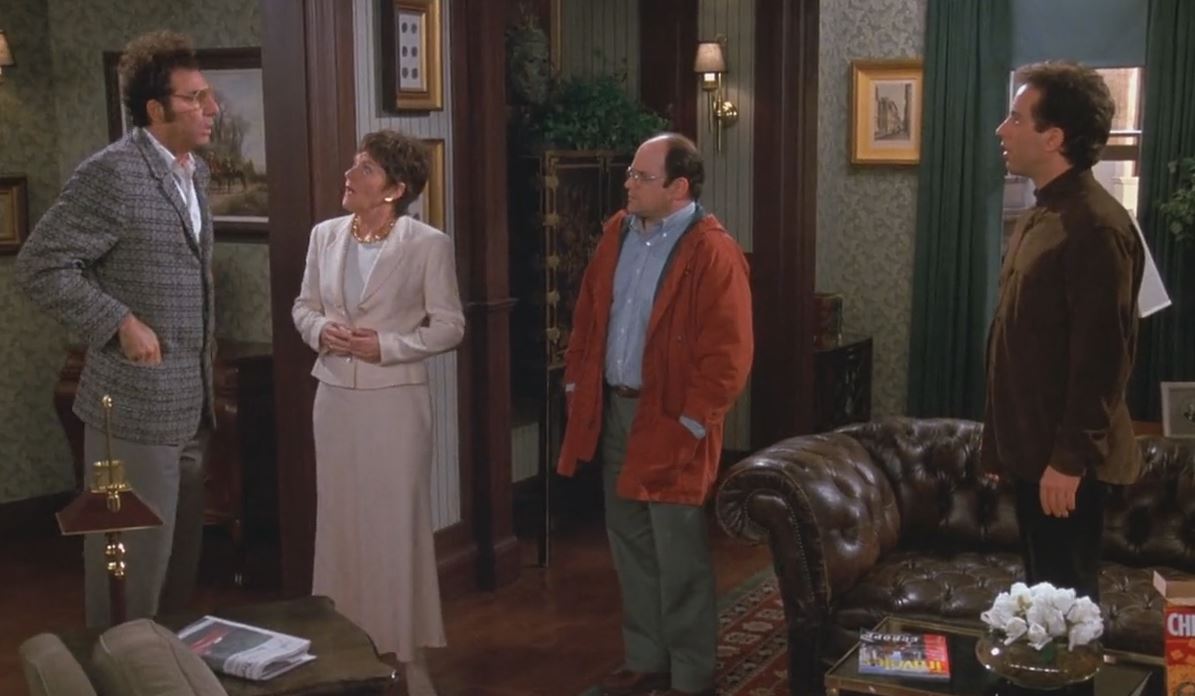 Pennypacker, if you're here and Mr. Vandelay is also here, then who's watching the Saab factory?

The gang drive from a bad Mets game when they get caught in traffic due to the annual Puerto Rican Day Parade, they go their four ways and encounter odd happenings; Jerry begins a rivalry with a man in a Maroon Golf Car, George sneaks into a cinema in the hopes of yelling out a one-liner during a climatic moment and Kramer pretends to be a tenant in an apartment to use the bathroom. Elaine tries to escape the madness by several means but fails. In the end; Jerry's car is trashed when Kramer burns the Puerto Rican Flag by accident and the gang walks home.

George: (about laser pointers) This thing can't hurt me, can it? I mean, it is a laser. What if it hits my eye?
Jerry: I don't know.
George: I can't be blind Jerry, the blind are courageous.

Kramer: It's like every Puerto Rican in New York City is out today!
Puerto Rican: Well, it is our day.

Kramer: Okay, here's the deal. He wants you to acknowledge that you cut him off with an "I'm sorry" wave.
Jerry: What's that?
Kramer: You raise the hand, lower the head-- "I'm sorry, I'm sorry. The buttons are really big on the car. I don't understand it. I haven't read the manual. Ooh!" You get my drift.

Elaine: Look! No one knows how long this parade is gonna last! They are a very festive people!

George: (Yells out) That's gotta hurt! (Audience stops laughing) It's... gotta hurt! Hurt! Because.. Aaarrrrrgh! Damn you, laser guy! You had to grab it all with your lowbrow laser shtick! You're just a prop comic! Where's the craft?!

Jerry: (trying to covertly tell Kramer and George that no one is posting sentry at the car) If you're here, then who's watching the Saab factory?

Kramer: It's like this every day in Puerto Rico.

You may recognize the actor who played "Maroon Golf". He was in Season 7's "The Engagement", he and Jerry were chatting as they were leaving the movie theatre.

As Elaine leaves the car in the beginning, Jerry says "You can't just leave the group!" to which Elaine replies, "I've been trying to leave this group for ten years." In some syndications, this line is cut.

This was the final episode written by the show's staff writers. All ten of them are credited. Jerry Seinfeld had t-shirts made up for them which read "So long, Jackass."

Elaine reveals that she went to Tufts University. It was her safety school.

One of the characters is named Christine Nyhart, after Seinfeld's script supervisor.

The scene where the Puerto Rican flag is burned resulted in complaints, causing NBC to issue an apology and never showing the episode on the network again. However, the episode is normally now shown in syndication.

After Elaine gets out of the car, there's some stock footage of New York City traffic. The lettering on the taxis are reversed, indicating that the film has been flipped from left to right.

After Elaine gets out of the car, there's some stock footage of New York City traffic. The lettering on the taxis is reversed, indicating that the film had been flipped.