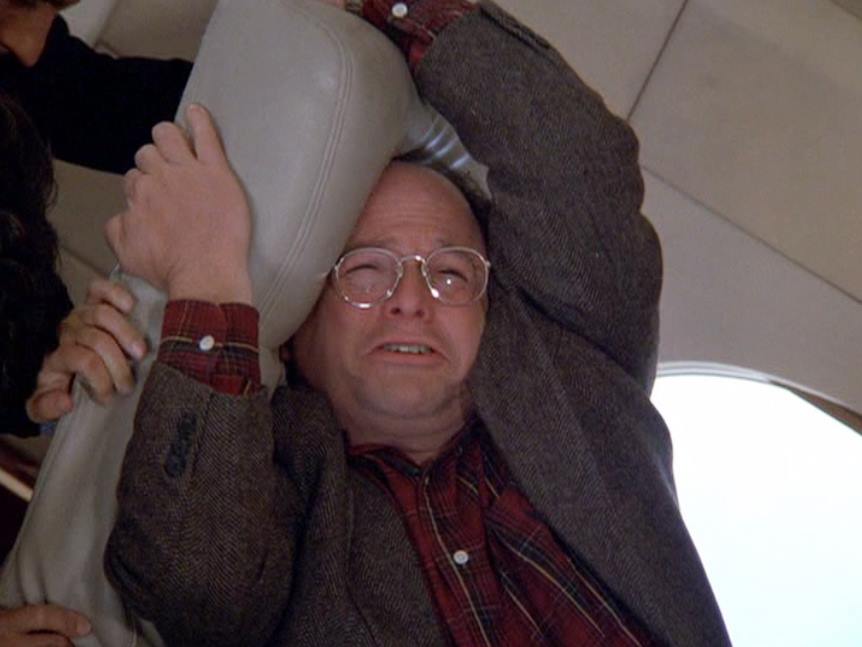 There's something I have to tell you. I cheated in the contest!

The new president of NBC calls a meeting with Jerry and George and offers them a series based on the pilot "Jerry". On their way to a celebratory trip to Paris, NBC jet needs to make an emergency landing in Latham, Massachusetts. While there, the gang stands idly by during a carjacking and is arrested on a new "Good Samaritan Law".

Newman: All right, but hear me and hear me well. The day will come - oh, yes, mark my words, Seinfeld - your day of reckoning will come, when an evil wind will blow through your little play world and wipe that smug smile off your face! And I will be there, in all my glory. Watching, watching as it all comes crumbling down!

George: He's actually doing him a favor. It's less money for him to buy food.

George: Really! Why don't you think before you do something?!
Elaine: Here's a thought! Bye-bye! (walks off)

Jerry: Hey how was the beach?
Kramer: Oh you missed it buddy. Lot of Femininas! Some major femininas!

George: (to Jerry) Too much?

Kramer: Jerry, its LA...nobody leaves!...She's a seductress, she's a siren, she's a virgin, she's a whorrrrreeeerrrr!

Jerry: Where do you think this relationship is? If you are thinking of instituting an open door urination policy, let me disabuse you of this notion right now my friend!
George: You're so uptight.
Jerry: Yeah uptight. Let's all just have a big pee-party! ... "Hey everybody grab a bucket, we're going up to Jerry's ... it's a big pee-party!"

George: When is it going to be my turn Jerry? When do I get my 15 minutes?! I want my 15 minutes!
Jerry: Oh quit complaining, at least you have your health.
George: Oh Health's not good enough! I want more health more than health! Health's not doing it for me anymore! I'm sick of health!

George: I'm not getting on a regular plane now. I'm all psyched up to go on a private jet. No way I'm getting on a regular plane.
Elaine: Well, I'm sure that they would fly us first class.
George: First class doesn't make it anymore. (to Jerry) Now you get on the phone with Kimbrough, tell him what happened and tell him to get another plane down here, but this time, the good one--the "Ted Danson" plane.

Elaine: (Picking up the phone) I'm gonna call Jill before we go.
Jerry: You can't make a call that important while you're walking out the door! You can't rush that conversation, that's worse than your cell phone walk-and-talk!
Elaine: Well I can't call her from the limo, can I call her from the plane?
Jerry: First you call her from the street, then she loses a call-waiting face off and now you're talking about a plane call?
Elaine: (giving up) Alright then I guess I'll call her from Paris.

George: I don't need any ideas. It's a show about nothing.
Estelle: Nothing, please. I'll tell you the truth. The whole thing sounds pretty stupid to me.

NBC President James Kimbrough said that he was planning on putting Jerry's show on Wednesday nights. This was the original timeslot for "Seinfeld" when it first premiered.

The U.S. West Coast airing of the finale of Seinfeld coincided with the death of Frank Sinatra. Sinatra's ambulance was able to arrive at his home and then to Cedars-Sinai Medical Center very quickly in light traffic, due to many in Los Angeles being indoors to watch the show.

According to the "Notes about Nothing" feature in the season 9 DVD release, Kramer enters Jerry's apartment 389 times over the course of the series.

Security during production of this episode was high. Audience members who attended the taping had to sign affidavits swearing not to reveal the events of the episode.

A number of rumors circulated speculating what may happen in the finale. Among them was that Jerry and Elaine would marry or that Jerry, George, Elaine, and Kramer would all die. Both rumors were parodied in the episode.

This two-part episode was nominated for the 1998 Emmy Award for Outstanding Multi-Camera Picture Editing for a Series.

Although they were replaced by different actors in "The Butter Shave," Peter Blood and Kevin Page return for this episode to reprise their roles as Jay Crespi and Stu Chermack.

The working title for this episode was "A Tough Nut To Crack", just so outsiders would not know it was the finale.

For the first time since Season 7 the show starts with an opening monologue.

There is no such place as Latham, Massachusetts.

While Jerry, George, Elaine, and Kramer are witnessing the robbery, and Kramer is filming the event, the reflection of the police officer is visible in the store window just over Kramer's left shoulder. It looks like he is waiting for his cue to join the scene.