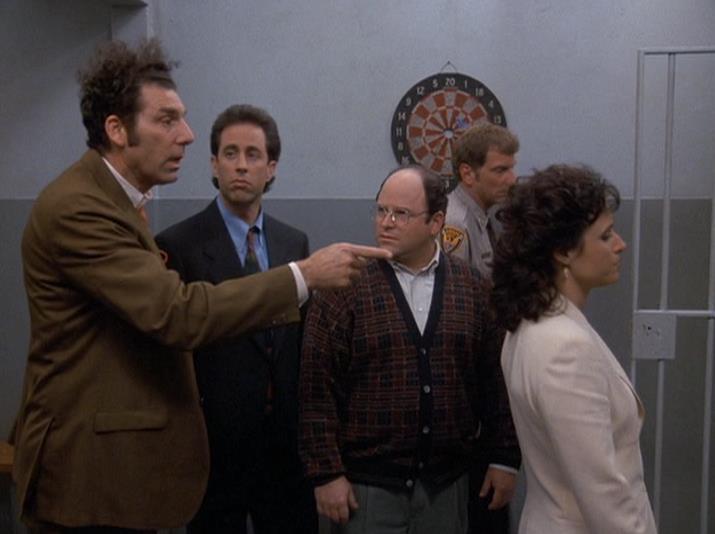 We could put on a show, maybe 'Bye Bye Birdie' or 'My Fair Lady'. Elaine, you could be Eliza Doolittle.

Jerry, George, Elaine and Kramer stand trial, defended by Jackie Chiles. Character witnesses are called from the show's nine seasons, and the four are sentenced to a year in prison.

Jerry: See now to me that button is in the worst possible spot.
George: Really?
Jerry: Oh yeah. The second button is the key button. It literally makes or breaks the shirt. Look at it, it's too high. Its no mans no land.
George: Haven't we had this conversation before?
Jerry: You think?
George: I think we have.
Jerry: Yeah, maybe we have.
(This is the same conversation the series opened up with between Jerry and George in "The Seinfeld Chronicles".

Jackie: (speaking to Jerry) Oh. By the way. They're real, and they're spectacular!

George: It was Moops!
Bubbleboy: MOORS!

Steinbrenner: He had one little problem though (speaking about George). He was a communist! Pink as they come! Like a big juicy steak!
Frank Costanza: HOW COULD YOU GIVE 12 MILLION DOLLARS TO HIDEKI IRABU?!!!!

Marla: Well... I heard of a... of a... oh I can't!
Prosecutor: It's alright, just... slowly...
Marla: I was... made aware of a-a contest, between the four of them. In which they... to see who could go the longest without--oh I can't do it! It's too embarrassing!
Prosecutor: Its okay, it'll be okay just tell us what happened.
Marla: To see who could go the longest without... gratifying themselves!
(The court reels back in disgust)

Jackie: Soup Nazi? You people have pet names for everybody!

(Estelle has fainted after the verdict)
Frank: C'MON! WE GOTTA BEAT THE TRAFFIC!

Jackie Chiles: Didn't I tell you I wanted you to wear the cardigan?
George: It makes me look older.
Jackie Chiles: Look older? Do you think this is a game? Is that what you think this is? I'm trying to give you a moral compass. You have no moral compass. You're going to walk into that courtroom, and the jury's going to see a mean, nasty, evil George Costanza. I want them to see Perry Como. No one's going to convict Perry Como. Perry Como helps out a fat tub who's getting robbed.

(Walking to their cell)
Jerry: Well, it's only a year. That's not so bad. We'll be out in a year, and then we'll be back.
Kramer: Could be fun. Don't have to worry about your meals, or what you're going to do Saturday night. And they do shows. Yeah, we could put on a show - maybe "Bye Bye Birdie" or "My Fair Lady". Elaine, you could be Eliza Doolittle.
Elaine: Why don't you just blow it out your...

(Epilogue, on stage in the prison)
Jerry: So what is the deal with the yard? I mean when I was a kid my mother wanted me to play in the yard. But of course she didn't have to worry about my next door neighbor Tommy sticking a shiv in my thigh. And what's with the lockdown? Why do we have to be locked in our cells? Are we that bad that we have to be sent to prison, in prison? You would think the weightlifting and the sodomy is enough. So, anyone from Cellblock D?
Prisoner 1: I am.
Jerry: I'll talk slower. I'm kidding - I love Cellblock D. My friend George is in Cellblock D. What are you in for,sir?
Prisoner 2: Murder one.
Jerry: Murder one? Oooooo, watch out everybody. Better be nice to you. I'm only kidding sir - lighten up. How about you, what are you in for?
Prisoner 3: Grand theft auto.
Jerry: Grand theft auto - don't steal any of my jokes.
Prisoner 3: You suck - I'm gonna cut you.
Jerry: Hey, I don't come down to where you work, and knock the license plate out of your hand.
Guard: Alright, Seinfeld, that's it. Let's go. Come on.
Jerry: Alright, hey, you've been great! See you in the cafeteria

Jason Alexander's real wife Daena Title is among the jurors in the courtroom scenes.

Julia Louis-Dreyfus is the only one of the core four characters not to be in the last scene, as she could not have logically been present in a men's prison.

It was revealed that the Soup Nazi's real name is Yev Kassem.

This two-part episode was nominated for the 1998 Emmy Award for Outstanding Multi-Camera Picture Editing for a Series.

The voice of the last heckler to call out at Jerry's jail performance was provided by Larry David. Throughout the series, Larry David has played more parts than any other actor or actress.

The scene with Jerry in the prison cafeteria was in fact the last scene to be shot for the show.

Two different verdicts were shot, so no one knew the real ending of the story.

Jon Hayman, who played the "Bubble Boy", now plays the prison guard who escorts Jerry off the stage at the very end.

Jerry Seinfeld is the only cast member to have appeared in every single episode of "Seinfeld".

The trial pays homage to the 1960 film "Inherit the Wind." Particularly, the scene where the attorney discusses how many important people will descend upon their little town, because the case is so high profile.

The Massachusetts "Good Samaritan Law" does not mandate that aid be provided, but rather prohibits the recipient from suing the provider for any injury suffered.