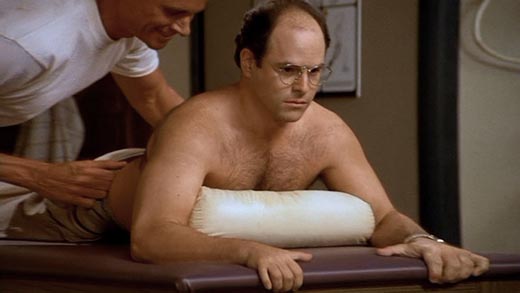 S03E01 The Note - 18-Sep-1991
Jerry and George's massages end up being more pain than pleasure when Jerry has a misunderstanding with the masseusse and George gets his massage from a man. Jerry and George get Jerry's dentist friend into trouble when they ask him for doctor's notes for physical therapy. Meanwhile, Kramer is convinced he's seen Joe DiMaggio in a neighbourhood donut shop. 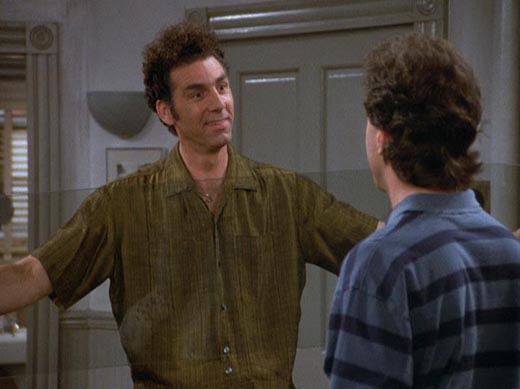 S03E02 The Truth - 25-Sep-1991
Jerry's audit becomes more trouble than he can handle when George breaks up with the former IRS worker who was helping Jerry, and she ends up in a sanitorium. Meanwhile, Kramer and Elaine have trouble getting along while Kramer dates Elaine's roommate. 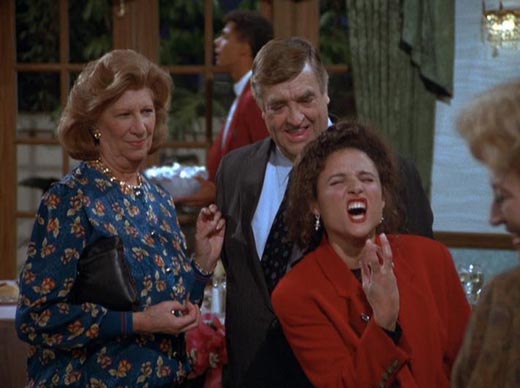 S03E03 The Pen - 2-Oct-1991
Jerry and Elaine travel to Florida to see Jerry's parents which they soon regret when Elaine injures her back on a fold - out couch and Jerry gets caught up in a scandal by just saying that he liked someone's pen. 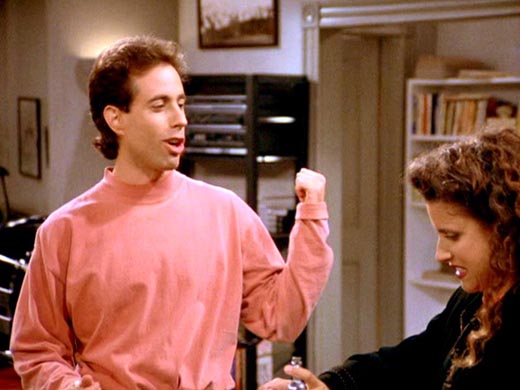 S03E04 The Dog - 9-Oct-1991
When a fellow airline passenger is sent to hospital, Jerry gets stuck watching his unruly dog for several days. With Jerry stuck in his apartment, George and Elaine discover they have very little to talk about on their own. Meanwhile, Kramer has difficulty breaking up with his girlfriend. 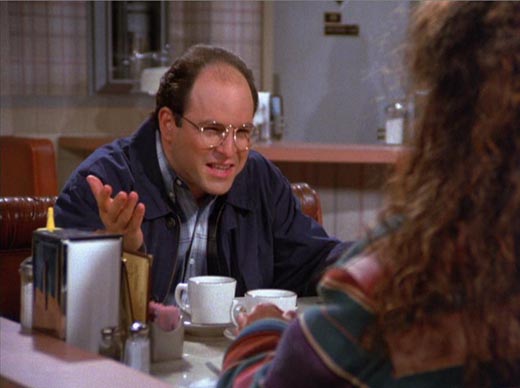 S03E05 The Library - 16-Oct-1991
Jerry is investigated by the library for a book he checked out in 1971 and never returned. Elaine fears for her career when her boss hates her recommendations, and Kramer strikes up a relationship with the librarian. Meanwhile, George believes that a homeless man is his old gym teacher, whom he got fired. 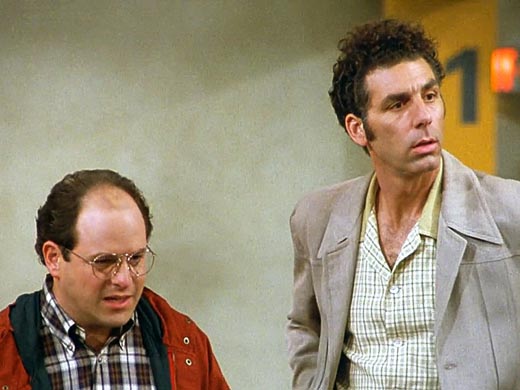 S03E06 The Parking Garage - 30-Oct-1991
The gang experience a series of misadventures while trying to find Kramer's car in a mall parking garage. 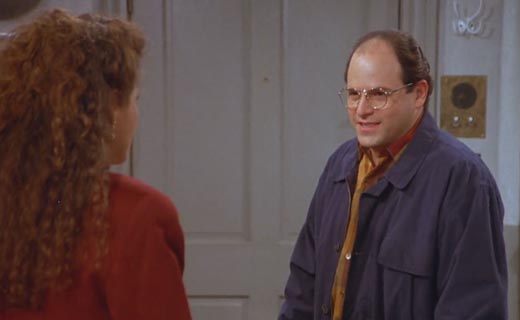 S03E07 The Cafe - 6-Nov-1991
Jerry tries helping the owner of a small restaurant attract customers by giving him a suggestion. George must take an IQ test for his latest girlfriend, so Elaine helps him in "a caper" where she takes the test for him. Kramer tries to keep his mother's ex-boyfriend's jacket, because it helps him meet women; however the ex-boyfriend comes looking for it.

S03E08 The Tape - 13-Nov-1991
George is excited about a new potential baldness cure that was discovered in China. While listening to a tape of his previous nights show, Jerry hears the voice of a mysterious woman who talks dirty into his tape recorder and everyone becomes excited by the voice. Elaine shines in an entirely new light for George when he is let in on the her secret, she's the voice. He is later driven crazy when she plays around with him while goofing around in front of Kramer's new video recorder. George tries the bald cure. Kramer searches for the jacket. 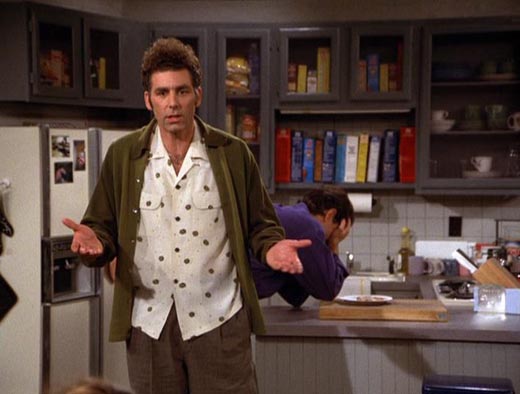 S03E09 The Nose Job - 20-Nov-1991
Jerry's brain and penis play chess against one another to decide whether he should keep dating a vacuous model with whom the "sex is great" but not anything else. George is dating a woman with a big nose, Kramer tells her it like it is and she gets a nose job; however, there is a complication. Kramer gets Elaine to help him retrieve the jacket. 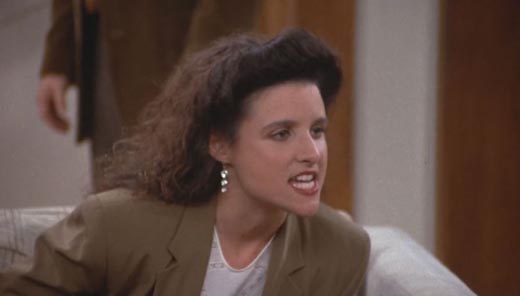 S03E10 The Stranded - 27-Nov-1991
Jerry & Elaine go to a party with George, while there they send signals to each other to get out of bad party conversations. Afterward, George abandons them there, when he leaves with a co-worker he has a chance with. Jerry & Elaine keeping the hosts up real late, while waiting for Kramer to come and pick them up. The host later takes Jerry up on his offer to drop by when he is in the city, just as Jerry is leaving. He stays in Jerry's apartment for the evening and parties with Kramer and a lady of the evening. Later George pays the price for his romance in the workplace (he must quit) and he tries to shoplift at the drug store where he says they still owe him ten dollars. 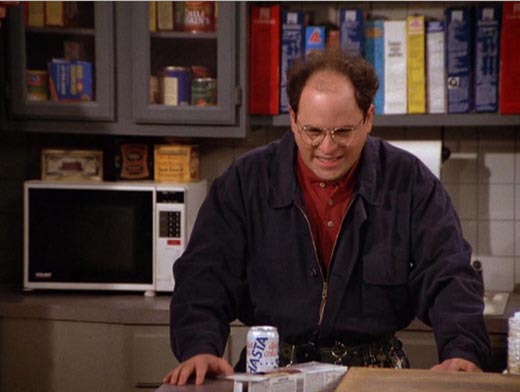 S03E11 The Alternate Side - 4-Dec-1991
Jerry's car is stolen and the criminal picks up his car phone. George decides to take a fill-in job moving cars from one side of the street to the other; this turns into a disaster for local traffic flow. Kramer gets a chance to do a line in a Woody Allen film; "these pretzels are making me thirsty." Elaine gets tired of her 66-year-old boyfriend and when she is about to break up with him, he has a stroke. 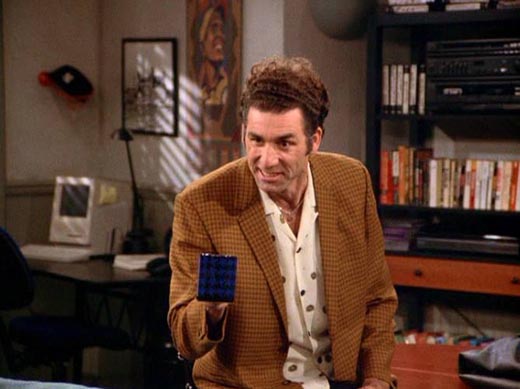 S03E12 The Red Dot - 11-Dec-1991
Jerry is the unwitting cause of Elaine's boyfriend falling off the wagon. Elaine gets George a job, so he buys her a gift, an $85 cashmere sweater. The sweater has a little red dot on it; hence the price. Elaine gives it back, then George gives it to the cleaning woman, to keep her quiet about them having sex on his desk. George gets fired. 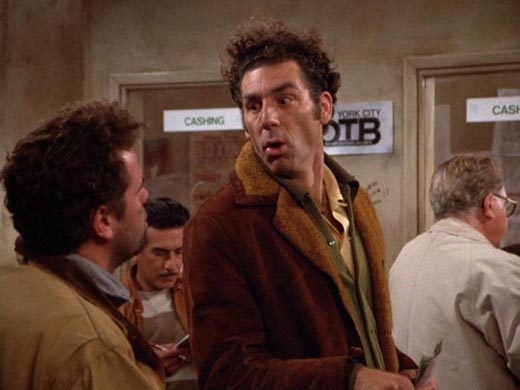 S03E13 The Subway - 8-Jan-1992
Everyone has an uncommon experience while going their separate ways on the subway. George meets a beautiful woman who distracts him from his intended destination, a job interview. Jerry falls asleep and then wakes up across from a fat naked man and winds up discussing with him, the New York Mets & Coney Island. Elaine's train stops in the middle of a tunnel on her way to be best man at a lesbian wedding. Kramer overhears a hot tip on a horse on his way to pay $600 in traffic violations. 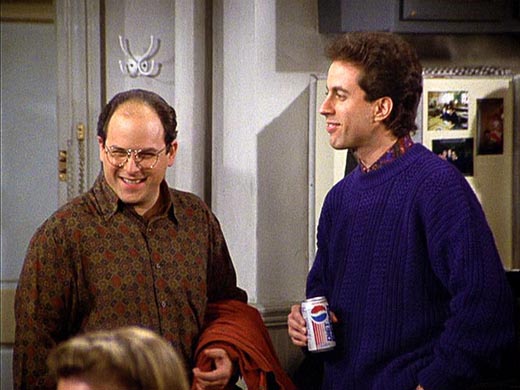 S03E14 The Pez Dispenser - 15-Jan-1992
Kramer joins the "Polar Bear Club." Jerry gets one of Kramer's Pez dispensers which makes Elaine laugh during a piano recital of George's girlfriend, and that puts their relationship in jeopardy. Kramer has an idea for a cologne that smells like the beach and suggests that George make a preemptive breakup with his girlfriend, that will give him the "upper hand." The Pez dispenser has a remarkable effect during a drug confrontation. 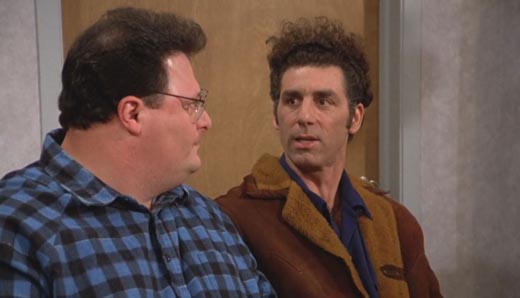 S03E15 The Suicide - 29-Jan-1992
Elaine needs to fast before an x-ray, so she tries stuffing herself three days before the test. After his neighbor Martin tries suicide, Jerry is hit on by his girlfriend, Gina, while at the hospital. A psychic warns George to cancel his vacation to the Cayman Islands, but never can tell George why. Jerry becomes worried when Newman (a friend of Martins) sees him with Gina. Elaine starts hallucinating from hunger. Everything hinges on a Drake's coffee cake. 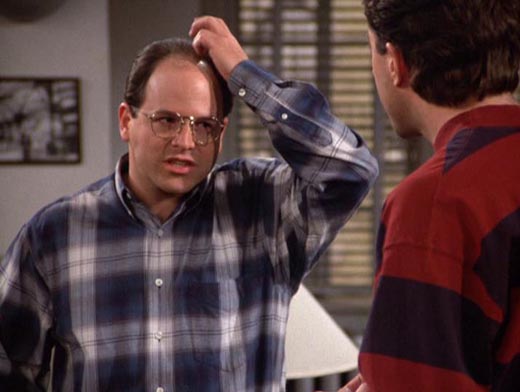 S03E16 The Fix-Up - 5-Feb-1992
After selling each other on the idea, Jerry and Elaine sell George and Elaine's friend on a blind date, then they await the results. They promise to keep each other updated with "full disclosure," though that doesn't happen. There also may be a problem with a defective condom. "My boys can swim!" 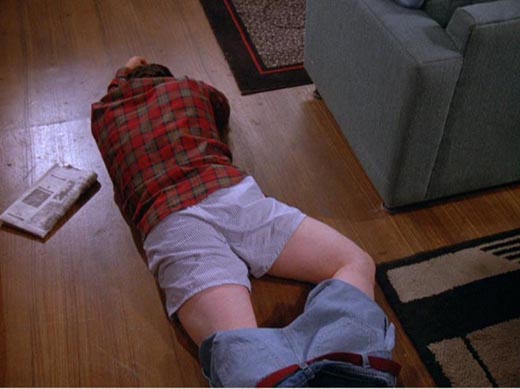 S03E17 The Boyfriend (Part 1) - 12-Feb-1992
Jerry meets Keith Hernandez and wants to make a good impression. Meanwhile, George is out of time on his unemployment and he works harder than ever on his scheme to get a 13 week extension. He tells the unemployment office he was really close on Vandelay Industries, a company that makes latex products and whose main office is Jerry's apartment. Kramer and Newman hate Hernandez back to a time when they were allegedly spit on by him; however, Jerry supports the "second-spitter theory." Keith asks Jerry about Elaine's status. Keith makes a date with her and breaks a date with Jerry. 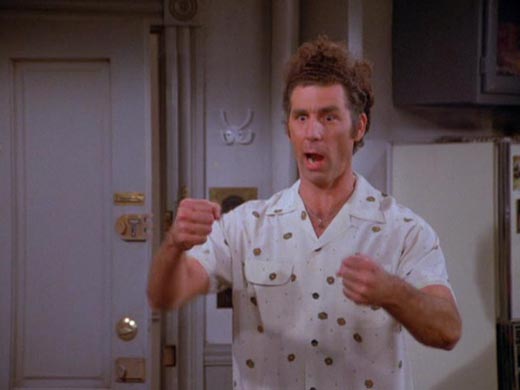 S03E18 The Boyfriend (Part 2) - 12-Feb-1992
George tries two more approaches with the unemployment officer. Kramer gets Jerry to accompany him to see a former neighbors' new baby, "you got to see the baby." Though he's gone out with Keith once, does that mean he must help him move. Elaine and Keith are hitting it off until he pulls out a cigarette. George wants to sleep with a really tall woman. Keith supports the "second spitter theory." Jerry and Elaine both breakup with Keith and George might get his wish. 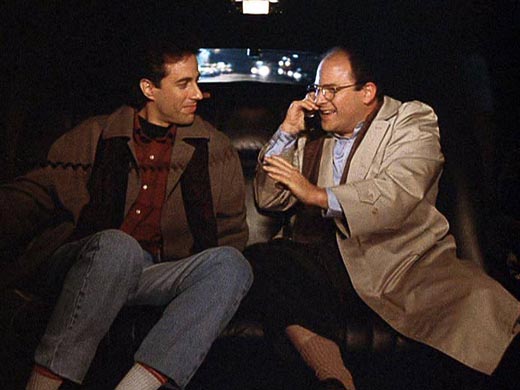 S03E19 The Limo - 26-Feb-1992
On a whim, Jerry and George take a limo from a passenger that Jerry knows never made it on the plane. While taking the limo they call Elaine & Kramer to join them for an event at Madison Square Garden, but it isn't the type of event they were hoping for. 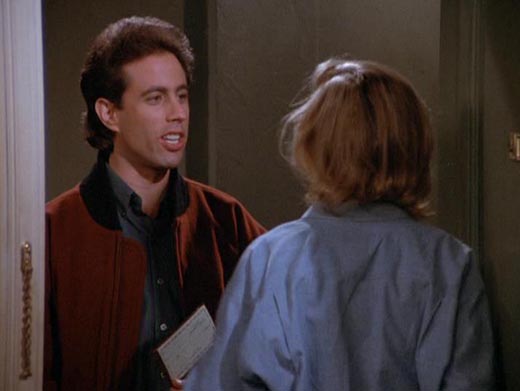 S03E20 The Good Samaritan - 4-Mar-1992
Jerry tracks down a hit-and-run driver, then he wants to date her, after dating her he finds out she hit another woman he's always wanted to date. George has an affair with Elaine's friend. Kramer has violent reactions to Mary Hart's voice. 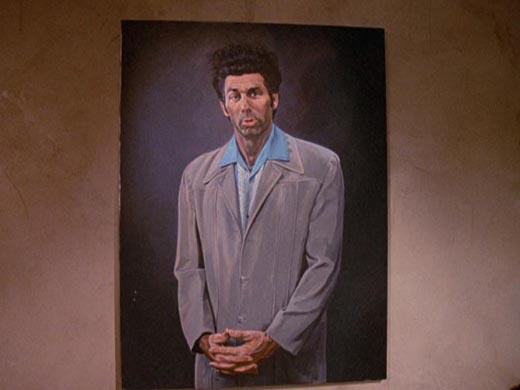 S03E21 The Letter - 25-Mar-1992
Kramer poses for a painting, that an elderly couple becomes just crazy about. George feels obligated to buy something when he accompanies Jerry to his new girlfriend's art studio. Elaine wears an Orioles baseball cap in the owner's box at Yankee Stadium and refuses to remove it. Jerry finds out his new girlfriend is a plagiarist after he hears the words she wrote in a letter, on television. Elaine gets a chance to return to Yankee Stadium. 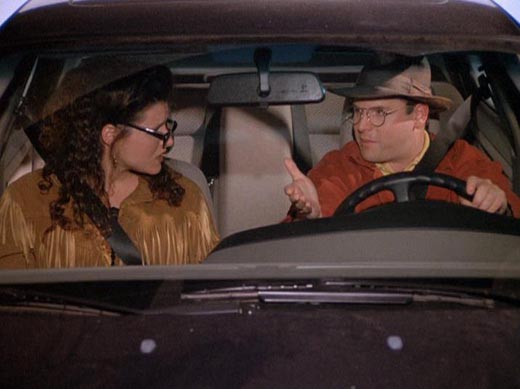 S03E22 The Parking Space - 22-Apr-1992
Kramer tells Jerry about something his friend Mike said about Jerry being "a phony." After borrowing Jerry's car, Elaine comes up with a wild story, because the car is now making a strange clanking noise. George gets into a confrontation with Mike about a parking space in front of Jerry's apartment. Everyone one the street debates about parking etiquette. 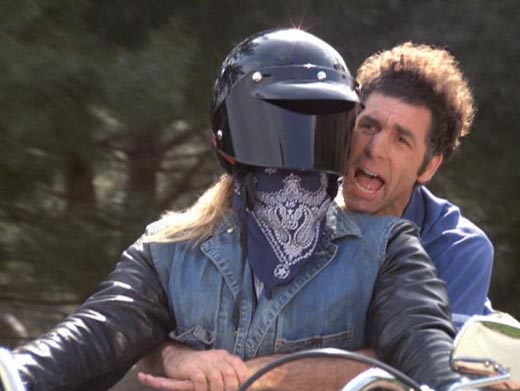 S03E23 The Keys - 6-May-1992
Kramer invades Jerry's life too much, so Jerry revokes his spare key privileges. Realizing that he has broken the "covenant of the keys" gives Kramer the realization he is now free to come out of the shadows. Kramer takes off for California to follow his acting dream. Jerry gave his spare keys to Elaine, then when he needs them, he goes with George to Elaine's (who has her keys) to search for his spare set. What they find is Elaine's show-biz project. Kramer finds adventure as he journeys across the country to LA where he gets a famous bit part on Murphy Brown.