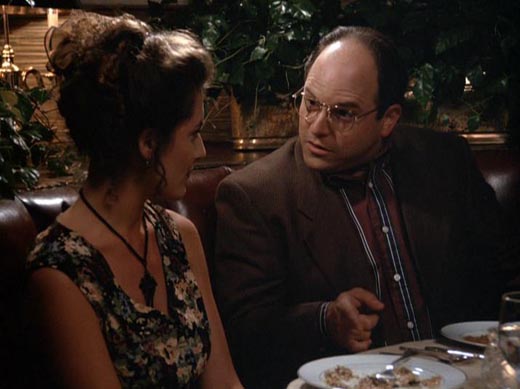 S05E01 The Mango - 16-Sep-1993
George tells Jerry about his lack of confidence below "the equator." Jerry begs Elaine for another chance when he finds out she faked her orgasms. Kramer gets banned from his favorite fruit shop and sends Jerry to get his fruit but the owner who knows Jerry's and Kramer's orders realizes Jerry is buying for Kramer. Joe bans Jerry from the fruit shop aswell. 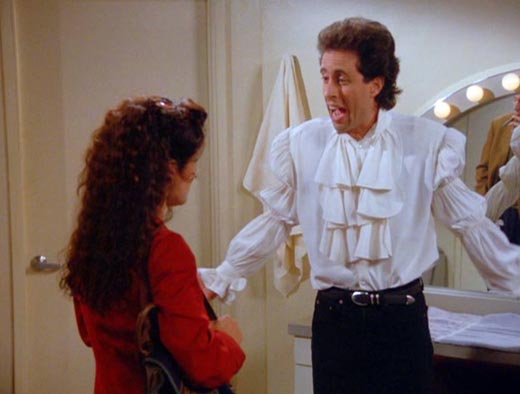 S05E02 The Puffy Shirt - 23-Sep-1993
George thinks he's made it big when, shortly after moving in with his parents, he gets work as a hand model. Elaine arranges for Jerry to appear on The Today Show to promote a charity benefit. However, when out to dinner with Kramer and his new "low talker" girlfriend, a misunderstanding has Jerry agreeing to wear a ridiculous, pirate-style puffy shirt on TV. 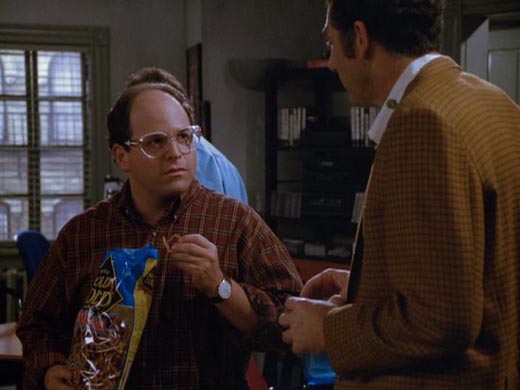 S05E03 The Glasses - 30-Sep-1993
George's glasses are stolen at the health club. While helping him pick a new pair, Elaine is bitten by a dog and fears she has rabies. Kramer helps George and Jerry get discounts or glasses and an air conditioner. Meanwhile, Jerry suspects his girlfriend is cheating on him with his cousin. 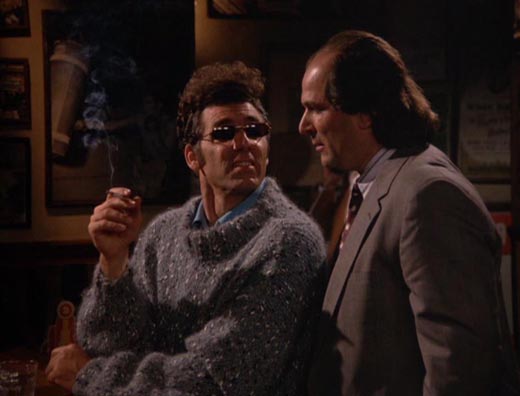 S05E04 The Sniffing Accountant - 7-Oct-1993
George's father gets him an interview as a bra salesman. Evidence points to Jerry's accountant being a drug user. So Jerry, Kramer and Newman set out to find out the truth. Elaine's new boyfriend is perfect except for his use of an exclamation point. 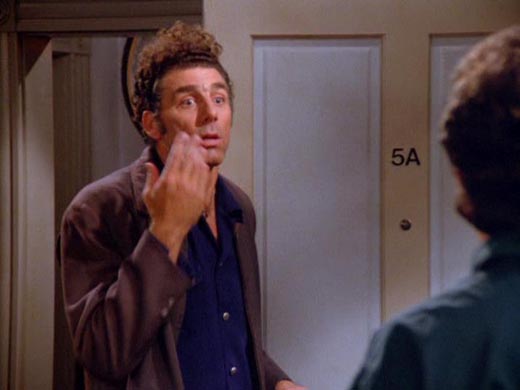 S05E05 The Bris - 14-Oct-1993
Elaine and Jerry are nervous about the religious duties they must do when they agree to become godparents to a couple's newborn. George is overjoyed by getting a great parking spot...until a man jumps off the building and onto his car. Meanwhile, Kramer thinks that he has stumbled upon the secret product of government genetic engineering - a "pig man". 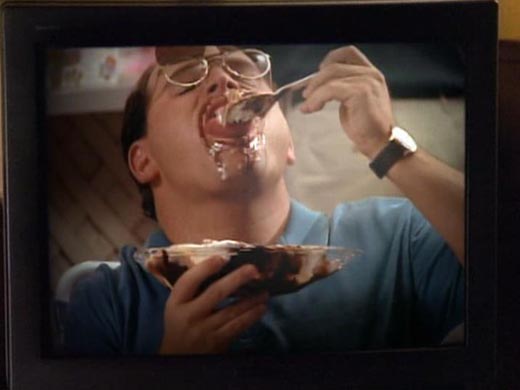 S05E06 The Lip Reader - 28-Oct-1993
Jerry is smitten with a line judge at the US Open, but after he gets her attention, he finds out she is deaf. Elaine has a problem not communicating with a limo driver. George wants to use Jerry's girlfriend to read the lips of his ex-girlfriend to find out what she is saying about him. While she is reading the lips, Kramer does the translation, that gets George in more trouble. Kramer becomes a ball man at the Open, when Monica Seles returns to tennis. 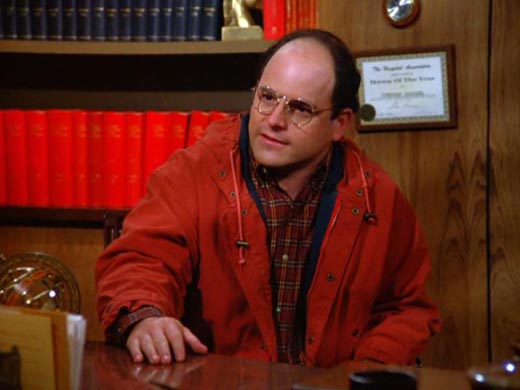 S05E07 The Non-Fat Yogurt - 4-Nov-1993
When they begin to gain weight, Jerry and Elaine suspect that Kramer has made a bad investment in a non-fat yogurt shop. Jerry inadvertently uses the "F" word, as a result so does Maryedith's son Matthew, a lot. George meets an old childhood friend whom he is convinced is trying to humiliate him. Elaine begins dating this friend and gives him an idea for his mayoral candidate's campaign. Kramer's date with a lab technician results in strange test results for the future mayor of New York City. 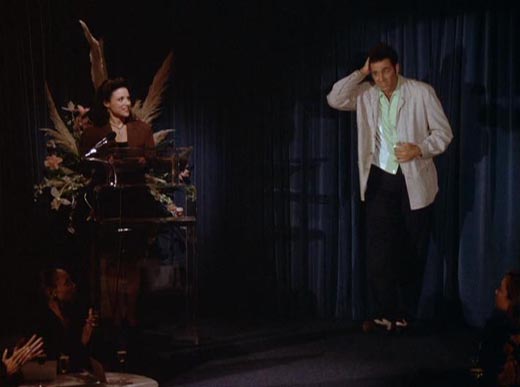 S05E08 The Barber - 11-Nov-1993
George is uncertain about whether his job interview was successful or not, so he decides to go into the office and act like an employee while the boss is on vacation. Jerry is reluctant to dump his old barber even when he is given a real bad haircut. Kramer arranges to get him a clandestine haircut at the apartment of his barber. Newman is charged by Jerry's barber to get a sample of Jerry's hair when he suspects foul play. 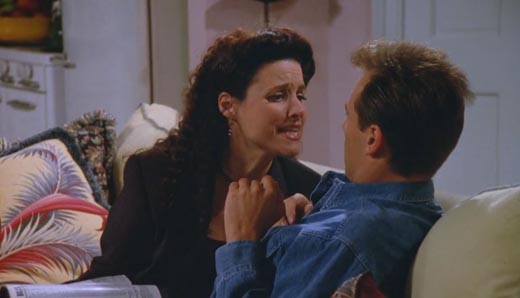 S05E09 The Masseuse - 18-Nov-1993
Elaine meets a man who's perfect except his name is the same as a notorious serial killer. Jerry is frustrated when he can't get his girlfriend, who's a masseuse, to give him a massage, even Kramer is a customer. George is obsessed when Jerry's girlfriend doesn't like him, so he tries extra hard to get her to like him, much to his own girlfriend's dismay. 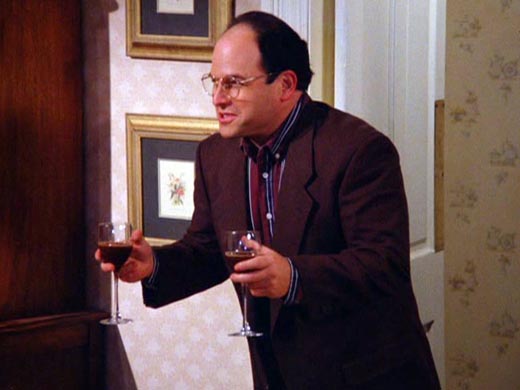 S05E10 The Cigar Store Indian - 9-Dec-1993
Jerry helps George out with a coffee table stain and makes Elaine take the subway home and gives her Mr. Costanza's TV Guide to read. While on the train, Elaine meets a strange man obsessed with television. George meets a woman at a refinishing store who he brings back to his parent's home and passes it off as his. A female Native American that he is interested in thinks Jerry is racially insensitive when he presents Elaine with a cigar-store Indian as a peace offering. George gets grounded when his parents return from vacation and find a prophylactic wrapper in their bed and a missing TV Guide. Kramer has an idea for a coffee table book on coffee tables that Elaine doesn't like but Mr. Lippman does. 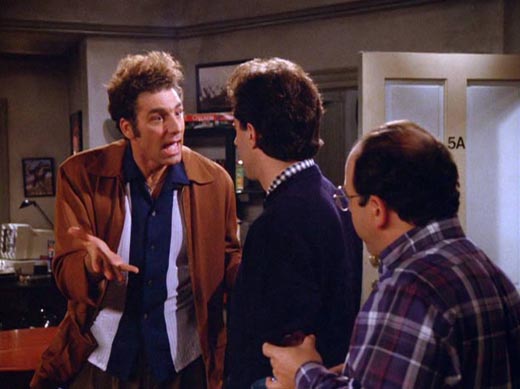 S05E11 The Conversion - 16-Dec-1993
George changes his religion to Latvian Orthodox to keep his girlfriend who must break up with him for religious reasons. Jerry finds a tube of fungus cream in his girlfriend's medicine cabinet and fakes an illness until he can figure out what the cream is used for. He asks Elaine to ask her current boyfriend who's a podiatrist. Kramer meets a sister at George's new church who becomes infatuated with him. 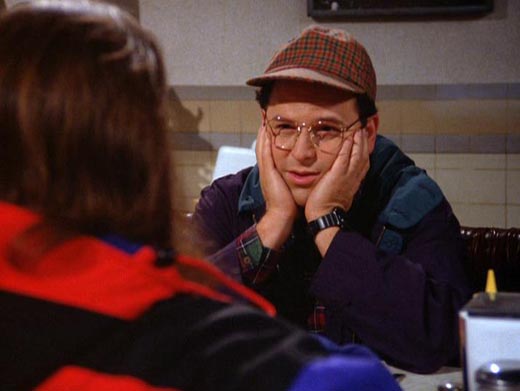 S05E12 The Stall - 6-Jan-1994
While in a bathroom stall, Elaine needs some toilet paper, but the woman in the next stall refuses to give her a piece. The woman is Jerry's girlfriend whose voice Kramer recognizes from a telephone sex line. Elaine's boyfriend, whose face she just loves, takes George & Kramer rock climbing. After his accident, Elaine isn't sure his face will be the same. 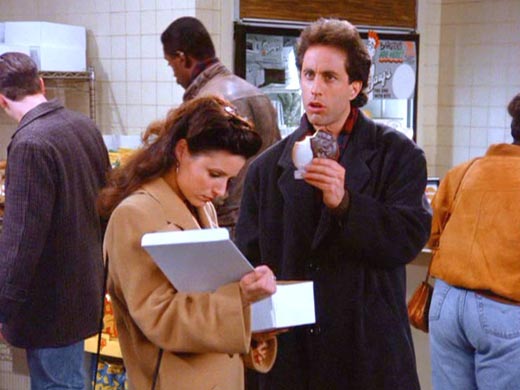 S05E13 The Dinner Party - 3-Feb-1994
The gang struggles to find gifts for a dinner party. Jerry and Elaine stop at a bakery to get a cake, but they forget to take a number and lose the chocolate pastry and the one they get has a hair on it. Kramer and George try to get the wine but must get change for a $100 dollar bill and wait for a double-parker to return to his car. 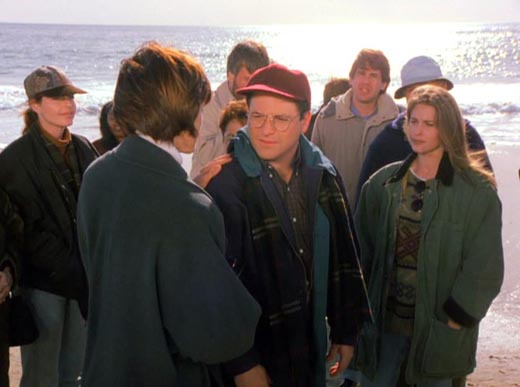 S05E14 The Marine Biologist - 10-Feb-1994
Jerry meets an old college classmate who asked about George, whom Jerry says is now a "marine biologist." An infuriated Russian writer tosses an electronic organizer belonging to Elaine out of a limousine that hits a passerby on the head. Kramer struggles with his golf swing and sand. While walking along the beach, George is called on to use his marine biology skills to save a whale. 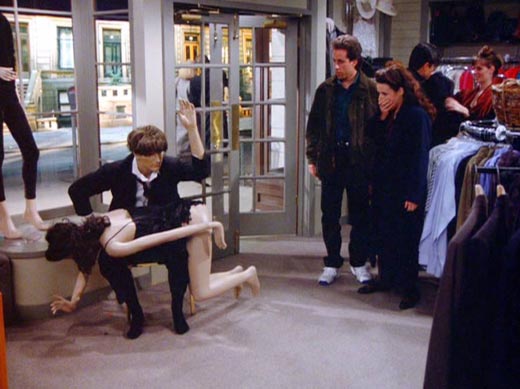 S05E15 The Pie - 17-Feb-1994
Jerry can't believe that his girlfriend won't share a piece of pie with him and when he goes out to dinner with her at her father's restaurant what he sees there will only put him into a bad situation. There is a mannequin at a store that looks like Elaine and she wants to know where it came from. Kramer has an itch that he needs scratched. George is interested in a new suit that he makes an enemy over and when he gets the suit, it makes a noise which might be a problem for his job interview. 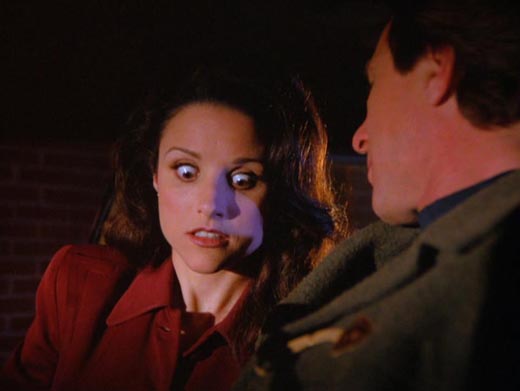 S05E16 The Stand-In - 24-Feb-1994
Kramer talks his stand-in friend, a "little person" into getting lifts, to keep his job. Jerry visits a sick friend, who's in need of a good laugh, at the hospital. George and his latest girlfriend have nothing to say to each other, he wants to break up, but won't when he finds out she is being urged to break it off. One of Jerry's friends "takes it out" while on his first date with Elaine. Jerry's friend takes a turn for the worse after his first visit, so he tries again. 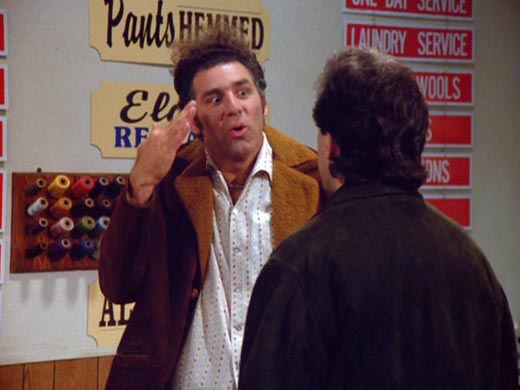 S05E17 The Wife - 17-Mar-1994
Jerry and his girlfriend pretend to be married to get a discount on dry cleaning. George worries when a man Elaine is interested in threatens to turn him in for urinating in the gym showers. Kramer's quilt is taken to the dry cleaners and he gets less sleep without it. Jerry's relationship with his "wife" begins to deteriorate and soon starts seeing another woman behind her back. Wanting to impress his girlfriend's parents, Kramer enters a tanning bed, but becomes a little too dark when he falls asleep. 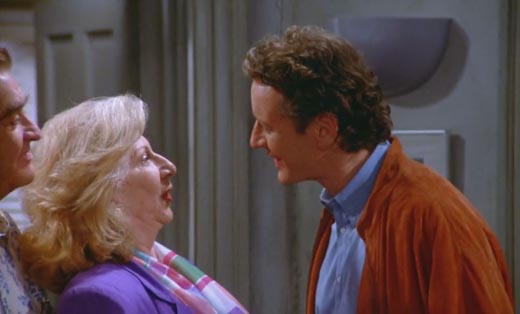 S05E18 The Raincoats (Part 1) - 28-Apr-1994
Jerry's parents are staying with him while they wait to take their trip to Paris and he's just returned from three weeks on the road can't get anytime alone with his girlfriend. George tries to get out of the big brother program, just after he gets talked into it. The Seinfelds avoid the Costanza's dinner invitation. Elaine's latest boyfriend, who's a "close talker," becomes unusually fixated on Jerry's parents and shows them New York City. Kramer makes a deal with Jerry's father to sell belt-less raincoats to a secondhand shop and George sells his father's moth-ridden cabana style clothing, right before they plan a cruise. 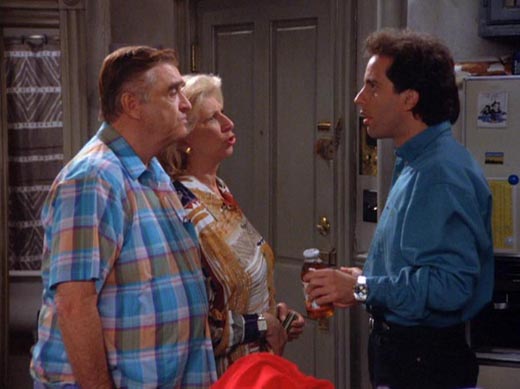 S05E19 The Raincoats (Part 2) - 28-Apr-1994
Jerry and his girlfriend get some time alone with each other at a movie, Schindler's List, they don't see it; however, Newman sees it and them. A delay in the shipment of the raincoats will make the Seinfelds miss their flight to France, George uses this as an opportunity to get his "little" brother back to his father. The Seinfelds manage to avoid meeting the Costanzas in New York City. 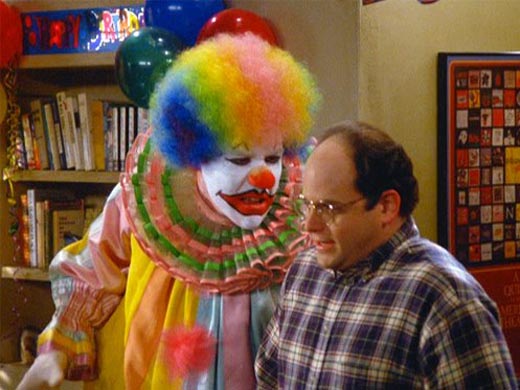 S05E20 The Fire - 5-May-1994
Kramer is dating one of Elaine's co-workers, a woman who drives her crazy. Kramer brings her to one of Jerry's shows, where she heckles him relentlessly; unfortunately there is a national magazine critic in the audience. George panics when there is a fire at his girlfriend's apartment, during her son's birthday party. Jerry decides to get revenge by heckling the woman where she works. She runs out of the office onto the street and loses her pinkie toe. Kramer finds the toe, takes a bus to the hospital and saves the passengers from a gunman. Inspired by Kramer's tale, George tries to confront his feelings of cowardice. 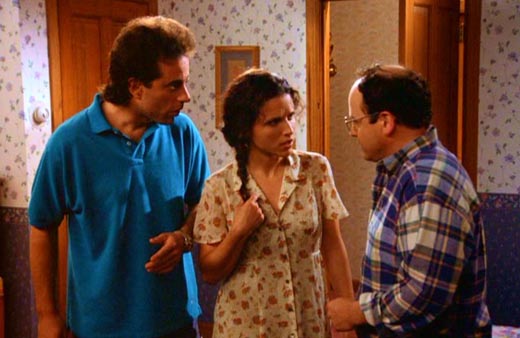 S05E21 The Hamptons - 12-May-1994
Everyone makes a trip to the Hamptons to "see the baby" and enjoy the weekend. George's girlfriend goes topless and everyone sees her chest before he does. "The baby" is the most hideous thing they've ever seen. Elaine is confused when a handsome doctor refers to her as "breathtaking" - the same term he later uses to describe the baby. Kramer finds a filled lobster trap. Jerry's girlfriend sees George naked, after he's just gotten out of the pool, so something isn't as it should be. 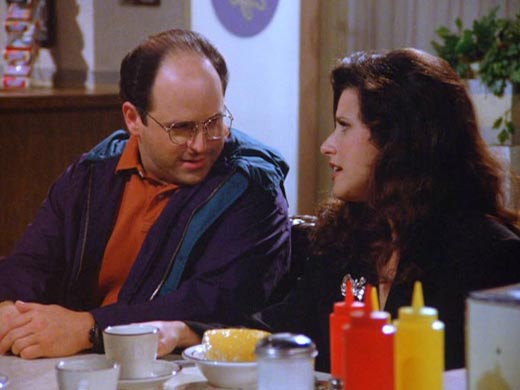 S05E22 The Opposite - 19-May-1994
George comes to the realization that he should try to do the opposite of everything, so he does, his luck changes and everything begins to go his way including getting a girlfriend, a job with the Yankees and moving out of his parents' house. Things begin to be unlucky for Elaine after she buys a box of "Jujyfruits." Kramer appears on Regis & Kathie Lee to promote his coffee table book. Rachel wants to break up with Jerry and he readily agrees, because his luck has been "even Steven." Elaine's eating of "Jujyfruits" causes Pendant Publishing to go under, and later she realizes that she and George have traded places.