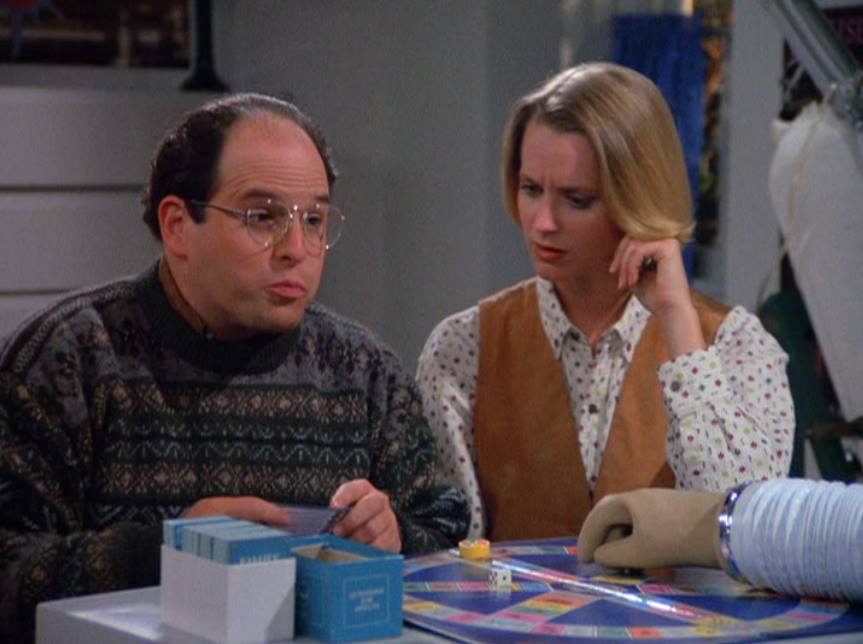 The correct answer is the Moops.

Jerry's girlfriend, Naomi has a laugh that sounds like "Elmer Fudd sitting on a juicer," and when she hears George's message to Jerry, she breaks up with him. So instead, Jerry asks Elaine to accompany him on a trip to a cabin in the mountain with George and Susan. Kramer isn't invited. Jerry agrees to a side trip to visit a sick fan, a "Bubble Boy." George gets into a fight with the "Bubble Boy" over the correct answer to a Trivial Pursuit question. Kramer and Naomi also make the trip to the cabin and get the fire started.

Bubble Boy: Okay, "History", this is for the game. How ya doing over there? Not too good!
George: Alright Bubble Boy, let's just play. Who invaded Spain in the 8th century?
Bubble Boy: That's a joke... The Moors.
George: Ohhh no! I'm so sorry it's the Moops! The correct answer is the Moops!

Elaine: Well, what about the sleeping arrangements in the cabin?
Jerry: Well, um, same bed and uh, underwear and a tee shirt.
Elaine: What about me?
Jerry: You'll be naked, of course.

(Talking about George.)
Jerry: Look at him! he's going like a hundred miles an hour!"
Elaine: Yeah but it's not enough for George to go fast, he's gotta make good time.
Jerry: I know. He once made it from West 81st St. All the way to Kennedy Airport in 25 minutes, I never heard the end of it!

(George is driving too fast as Jerry is following him)
Jerry: What's he doing? What is his hurry?
Elaine: Well, you know George. It's not good enough to get there. You gotta make good timing.
Jerry: I know he once went from West 81st Street to Kennedy Airport in 25 minutes. I never heard the end of it.
(Elaine laughs quietly)
Jerry: Look at him.

Susan: So what kind of a bubble, like an igloo?
Jerry: No, that's what I thought. But apparently it's just a big piece of plastic, dividing the room.
George: What kind of plastic do you think it is? Like that dry cleaning plastic?
Jerry: That's no good. He wouldn't last 10 minutes in there!

George: (voice on answering machine, about Naomi) All right, you know she's got that laugh. What did you say? It's like Elmer Fudd sitting on a juicer?

Naomi: I thought you were happy-go-lucky.
Jerry: No, no, no, I'm not happy, I'm not lucky, and I don't go. If anything, I'm sad-stop-unlucky.

Elaine: What's that?
Jerry: Oh, it's an autographed picture for my dry cleaner. I don't know what to write on these things. I hate doin' this.
Elaine: (reading) "I'm very im-PRESSED?"

Bubble Boy: What's your story?
Susan: I-I-I have no story.
George: She works for NBC.
Bubble Boy: How 'bout takin your top off.
Mrs. Sanger: Donald, behave yourself.

Jerry: I can't date a girl with that kind of laugh...it's like CoCo Chanel goin' out with a Fishmonger!

Kramer: My Cubans!
(He runs off to the burning cabin)

(Jerry has lost track of George's car)
Jerry: What is he doing? Is he out of his mind? Do you see him? I don't even think I see him anymore. Where is he?
Elaine: Isn't that blue car him?
Jerry: No, no that's not him. What happened to him. I can't believe it. I lost him. That stupid idiot. Now what are we gonna do?
Elaine: It's no big deal, Jerry. We'll just meet him at the bubble boy's house.
Jerry: I don't even know where the bubble boy lives. I don't even remember the name of the town.
Elaine: You don't have the directions?
Jerry: No, I was following him.
Elaine: How could you not take the directions?
Jerry: Because HE'S my directions.

The set for the roadside diner Jerry and Elaine pull off at on the way to the Bubble Boy's house is the same set used for scenes at Reggie's Diner in later episodes.

The "Moops" misprint in the Trivial Pursuit game is based on a real misprint found by staff writer Bill Masters.

The 20th anniversary edition of Trivial Pursuit features a card with the question, "What series co-creator supplied the voice for Seinfeld's Bubble Boy?" According to the card, the answer is "Larry David", however the correct answer should be "Jon Hayman".

According to George Shapiro, the show received negative letters from real-life "bubble boys" and their families because of this episode.

When Jerry confronts George of the message he left on his answering machine, in one shot, Jerry has his arms hanging down, but then in the next shot, he has his hands on his hips.

On the drive up to the cabin, the back seat of the car is full. You cannot see out the back window. After leaving the Bubble Boy's house, fire trucks pass the cars. The shot of Jerry and Elaine in the car shows the back seat empty and the light of the firetruck visible behind them.