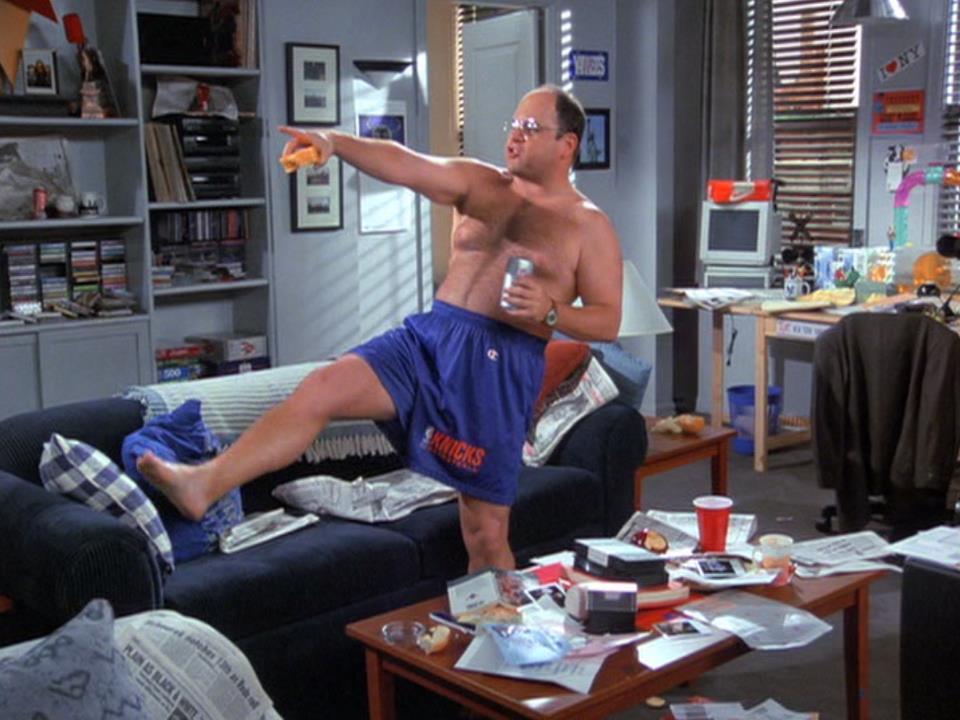 I'd just like to point out how disturbing it is that you equate eating a block of cheese with some sort of bachelor paradise.

After a summer of grieving, George is ready to move on with his life, but a comment Jerry makes to the Rosses inspires them to start a foundation in Susan's memory. Jerry, who has broken off his engagement to Jeanie, does research into what sort of break-up story makes a man most appealing to women. Elaine becomes president of J Peterman when a burnt out Peterman flees to Burma. Meanwhile, the new-found perspective and confidence Kramer has gotten from Karate inspires Elaine - until it's revealed that he's been fighting against children.

Peterman: You there, on the motorbike! Sell me one of your melons!

Kramer: What's wrong?
Elaine: Peterman ran off to Burma, and now he wants me to run the catalog.
Kramer: Where?
Jerry: Myanmar.
Kramer: The discount pharmacy?

Peterman: No apples. No pears. No bananas. Where's my pineapple?!

Jerry: (about the catalogue) How's it look?
Elaine: It's a peach.
Jerry: What's that?
Elaine: I say, it's a peach.

Mr. Ross: It's a terrible tragedy when parents outlive their children.
George: Yes, I agree. I hope my parents go long before I do.

Elaine: You've never felt remorse.
Jerry: I know. I feel bad about that.

Kramer: Karate. It's a lifetime pursuit of balance and harmony.
Jerry: But with punching and kicking.

Writer: So I pressed through the rushes, and there below me -- the shimmering waters of Lake Victoria.
Peterman: Oh, for the love of God, man, just tell me what the product is!
Writer: It's a... a... washcloth.
Peterman: No washcloths!!

Jerry: You're fighting children!
Kramer: We're all on the same skill level, Jerry.

Elaine: (to Jerry) Between you and me, I always thought Kramer was a bit of a doofus. But, he believed in me. You did not. So, as I see it, he's not the doofus. You are the doofus.

This episode was dedicated "In Memory of Our Friend Marjorie Gross." Marjorie, one of show's producers and writers, died from ovarian cancer at the age of 40.

When George looks skyward and yells, "KHAAAAAAAANN!!!" he is making a reference to "Star Trek II - Wrath of Khan", where James Kirk lashes out at Khan with similar angst and fury.

This is the second time Kramer has been attacked by a group in an alley, causing him to try and go up a ladder. The first time was in the previous season "The Sponge" episode when he was attacked by a group of AIDS walkers because he refused to wear an AIDS ribbon.

Note at Kramer's Karate Dojo there's a picture of martial artist Jackie Chan hanging on the wall. Unfortunately, Jackie's techniques are related to the Chinese art of Kung Fu, and not to Karate, a Japanese doctrine.